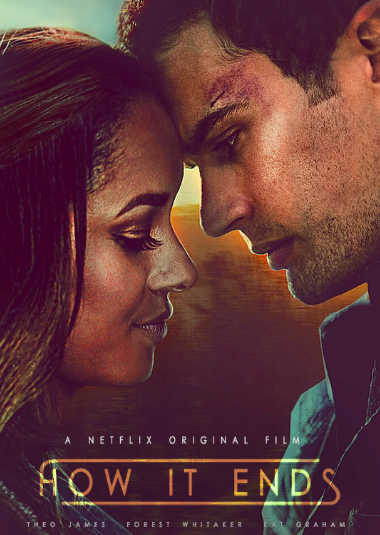 How It Ends  opens up in Seattle with Will (Theo James) and Sam (Kat Graham ) getting an ultrasound to find out the sex of their child (it’s a boy!) Following the exciting news, Will travels solo to Chicago to ask Sam’s conservative parents, Tom (Forest Whitaker) and Paula (Nicole Ari Parker-Kodjoe) for permission to marry Sam. The interaction does not go well, and Will does not get the chance to bring up the proposal. The next day, Will and Sam’s phone call is disconnected after an ominous sound erupts in Seattle. Will anxiously goes to the airport to catch his flight back to Seattle, but all of the flights are canceled, and he ends up back at Sam’s parents home. After the electricity and telecommunications go down, Tom and Will agree to drive from Chicago to Seattle to get Sam.

How It Ends is a road trip film, and the scenery is beautiful. The cinematography, the coloring, and all of the physical attributes of the film are executed wondrously.

In the midst of an apocalypse, Will, Tom, and an unlikely companion/mechanic, Ricki (Grace Dove)  struggle to reach Will’s pregnant fiance, who is thousands of miles away. During the drive they face many roadblocks: a literal roadblock, a psycho criminal parading as a cop hunting them, car troubles, collapsed lungs, society collapsing as humanity is being thrown out of the door, etc. all with the impending apocalypse as the backdrop of the film. After Will can overcome these roadblocks, he is finally reunited with Sam. However, an earthquake triggers a volcanic eruption nearby them which causes an all-engulfing cloud of smoke to ignite. The final scene has an open ending as it shows Will and Sam driving away from the impending cloud.

The themes of How It Ends are survival and love. A large part of the survival theme during the apocalypse is Man vs. Nature. Will is initially a seatbelt wearing passenger with a strong distaste for guns, but by the end of the film, he is forced to adapt into a reckless stunt driver with a need for guns and bullets. The theme of Love is stated throughout the film as Will’s motivation. The movie never explores nor chooses a stance on why or how the world is ending; it is simply a backdrop in the overall story. Will’s primal urge and motivation are to get to Sam by any means necessary. Anytime the opportunity arises for Will to explore why the world is ending, his urgency for wanting to be reunited with Sam quickly trumps in priority.

Visually the film flows, the director makes great use out of the scenery to transition from scene to scene. However, the film does not flow on a story level, and it has a cut and dry structure as each scene ends abruptly offering little to no closure.

I did not find the film to be that entertaining. The film cheats the story by not exploring or showcasing Will and Sam’s relationship. How It Ends is an action film fueled by this incredible romantic act of traveling across the country in spite of the apocalypse, but as a viewer, I was never emotionally invested into Will and Sam’s relationship. This film is a big example of why “show don’t tell” is essential because (1) we barely see Sam and (2) we never get background on them. Since the “why” to how the world is ending is inconsequential to the story, the film could have substituted some of the stagnant action plot points to showcase features of the Will and Sam relationship.

How It Ends is an atypical action film. In the drive from Chicago to Washington, the film has the typical action plot point scenes – (1) Military roadblock. (2) A psycho prisoner parading as a cop hunts Will and Tom. (3) They drive through a burning town, and a bandit steals their gas supply and Will, Tom, and Ricki has to kill them to get it back. (4) Will finally makes it to Sam, but when the not so friendly neighbor who escaped with Sam wants to explore why the world is ending, Will literally says “in the end, it doesn’t matter,” and in a true Rick and Shane (The Walking Dead) showdown, Will kills the neighbor and escapes with Sam. The atypical-ness of the film is how easy the resolve is and how predictable all of these absurd dilemmas seem to be. The smoke and mirrors of the film are how does the world end? And the true premise of the film is if the world ends, who would you want to be with?

How It Ends as a story is not impactful, however visually it is impactful. Rarely do films, or TV Shows allow Black women to be put on a pedestal and be worthy of saving. Sam is played by Kat Graham, a Black actress and in How It Ends, Sam is “worthy.” We do not get any distinct personality traits of Sam, and she plays the quintessential “damsel in distress,” but it does feel refreshing to see a film make a stance in stating that this particular woman is “worthy” of saving.

This film is not realistic. The world could end, and we could never know why. However, the film injects people’s primal survival instincts with a heavy dosage of steroids and teeters on the ridiculous side.

Will’s character does not have an emotional arc in the story. He begins and ends as the same resolute and slightly arrogant guy in love. Will’s relationships with each character transition over the journey and he learns some new skills, but he remains emotionally stagnant. The film missed out on opportunities to explore Will’s doubt of Sam’s survival and his doubt on if he is worthy of Sam. The story teases those doubts, but never does it allow Will to showcase any of them.

Tom fits the most within the story. He is a former Marine and inherently knowledgeable about survival and is proactive along their journey.

We are given little and unsubstantial background on each character. However, the character Ricki was the standout. She is likable and is given a lot of hints and teasers to becoming a fully fleshed out and well-rounded character, but as soon her story begins to open up, Ricki exits the film.

How It Ends is an interesting film and an atypical action film. The film is aesthetically pleasing, but it falls short when exploring the characters and their relationships with one another. It is tough as a viewer to truly root for any of the characters, because the film offers no emotional capital. However, this film stands out amongst other action films in its atypical nature, because it voids the urgency of the ending. The musical score in the film is suspenseful, but almost whimsical throughout which I appreciated as a viewer, because I didn’t feel anxious. I thought it was a peculiar choice, but I genuinely appreciated the flow of each scene and I was not in a hurry to move on to the next so quickly. In my opinion, How It Ends is a frustratingly sweet film, because you never actually find out how the world ends. However, the message of if the world were actually ending nothing would matter, but hopefully, you are with the person that you love is super sweet.

How It Ends is currently streaming on Netflix.

Megan Maher is a novice filmmaker: Writer/Director/Producer/Editor based in Los Angeles, California. You can follow her on Twitter @Goldengrl22. Find out more about Maher and her work on her website “Megan Maher, Filmmaker“