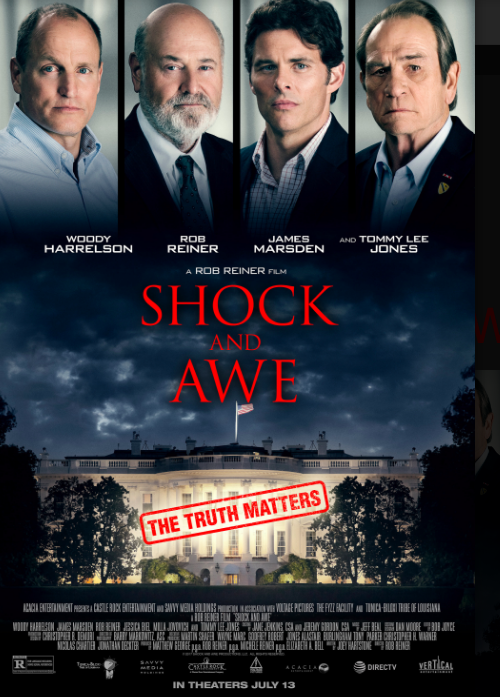 Directed by the illustrious Rob Reiner — is the new political thriller based on true events called Shock And Awe. The drama takes a deep dive surrounding the events of what took place after the worst terrorist attack on American soil — the tragedy of September 11th.

Journalists Joseph Galloway, Jonathan Landay, Warren Strobel, and John Walcott were the only ones who got it right in reporting and fact-finding the circumstances that led up to the 2003 Iraq War and were the only news outlet that questioned the true nature of the Bush White House’s justification for the conflict.

Similar to Woodward and Bernstein, writers Jonathan Landay (Woody Harrelson) and Warren Strobel (James Marsden) are outliers in a sea of propaganda journalism seeking to find the truth. Rather than following the mainstream publications that seem to kowtow to what the Bush administration spoon-fed them — during their work at the news agency Knight Ridder — Landay and Strobel worked diligently trying to hang on to their last shred of integrity, to find out the real story behind the weapons of mass destruction rhetoric being spun in the White House. 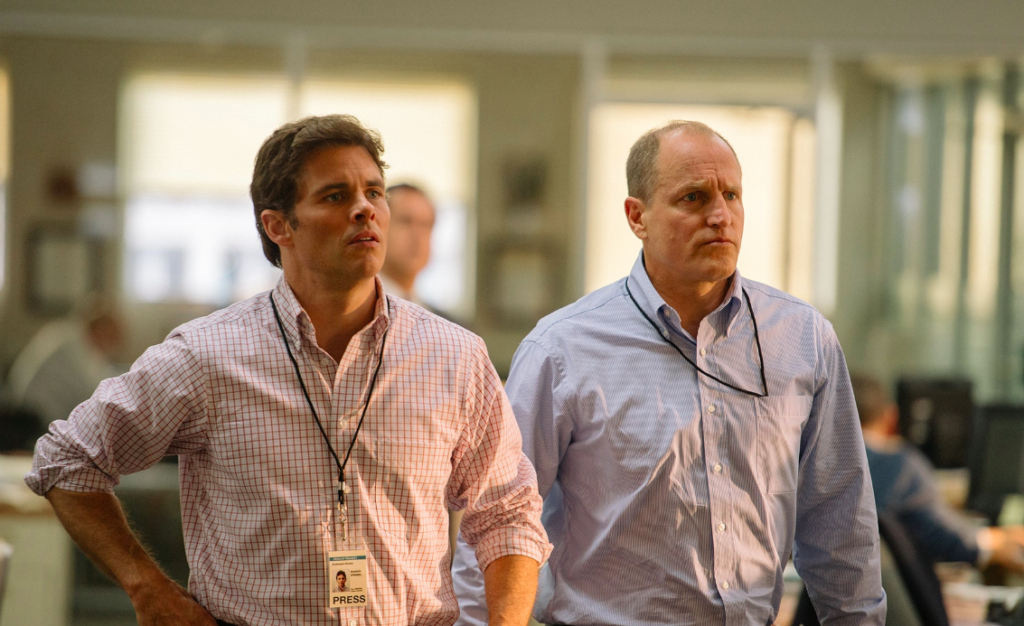 I never heard of Knight Ridder prior to watching the film myself, and was intrigued by the fact that large mainstream pubs like The New York Times, Washington Post and Philadelphia Inquirer just to name a few, all fell in line with what the administration was telling them about WMDs in Iraq.  Judith Miller herself who worked for the The New York Times’ Washington bureau (whose paper later apologized to the American people about its lack of investigative reporting) even said herself that although everyone was fooled about the WMD propaganda, Knight Ridder was not. 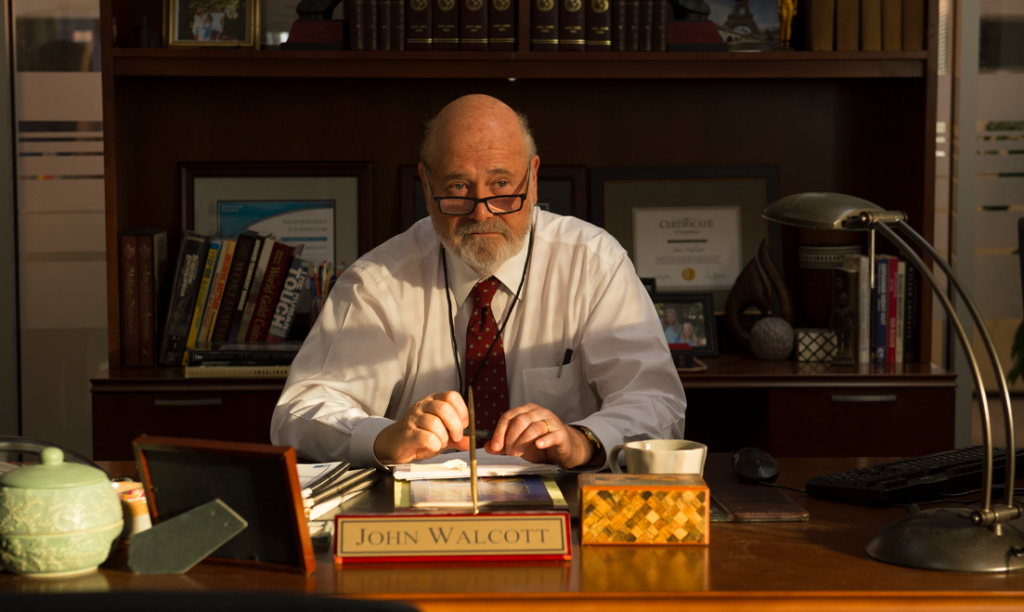 This film provides an inside look into that story and follows not only the journalists reporting the story, but the diligence of John Walcott (Rob Reiner) who refused to budge even when several media outlets refused to run his agency’s stories.

Bronze Star decorated newspaper correspondent and columnist Joe Galloway is played by actor Tommy Lee Jones. Jones pulls off a decent performance, however, the actor can’t seem to get out of the box of playing the role of the cantankerous old man that is set in his ways. The story at times was compelling but also was interrupted by unnecessary subordinate plots filled with tertiary characters. One example is when Warren Strobel meets Lisa (Jessica Biel) who happens to be his next-door neighbor and later becomes a love interest for him. Strobel is awkward and rusty at dating and there are various scenes between the two during their infatuation phase that honestly felt more like filler than actual story or character development. There’s even a scene where Lisa tells Strobel she did some research about Iraq before their date. She shoots off a long-winded backstory about the history of the Middle East and its regions which serves as clumsy exposition more than anything else. 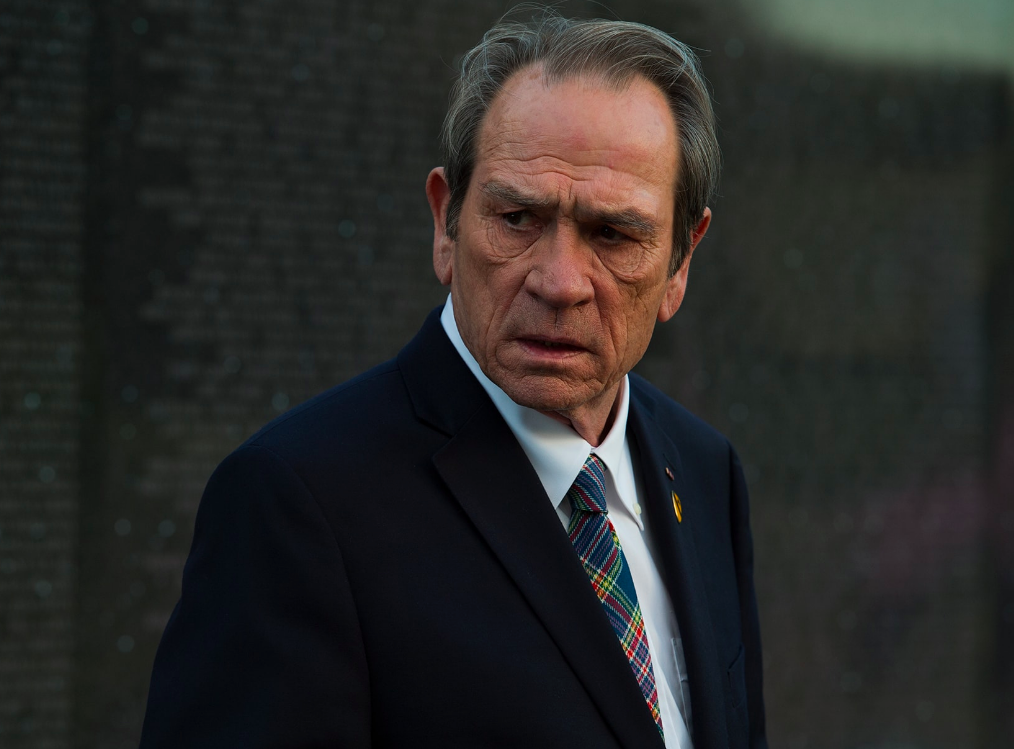 Jonathan Landay’s wife Vlatka (Milla Jovovich) is an interesting addition as we explore Landay’s life outside of his career.  She cancels their home subscription to The New York Times and has a gut instinct that the administration is lying.

Shock And Awe has another secondary strand of the main plot through the character Private First Class Adam Green (Luke Tennie) which kicks off the narrative. Green like many men and women who had a visceral and emotional reaction to 9/11, decides to sign up for combat to fight in the Iraq War. In the first scene of the film, he testifies before the Senate Committee hearing on Veterans Affairs to seek additional funding for benefits. And although the committee has questions for him — he, in turn, asks the committee to answer his question to which he asks, “how the hell did this happen?” 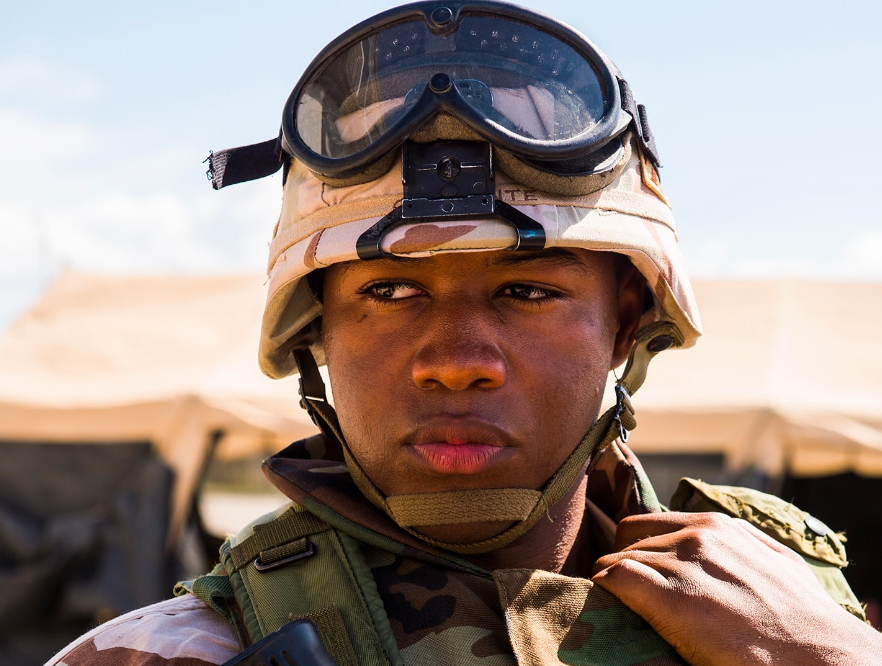 It’s a powerful speech given by Green which sets the tone for the film.

Shock And Awe has its share of some minor storytelling flaws — but executes a relevant reflection on the state of journalism. Finding facts, waiting on truth and getting a sense of the whole story seems to be a dying concept in today’s knee-jerk world of journalism.

In a world where everyone wants to be first on “who got it right”, Knight Ridder was the only publication who actually did get it right.

Shock and Awe will make its debut in theaters July 13th.

Milla Jovovich is That Girl in ‘Monster Hunter’