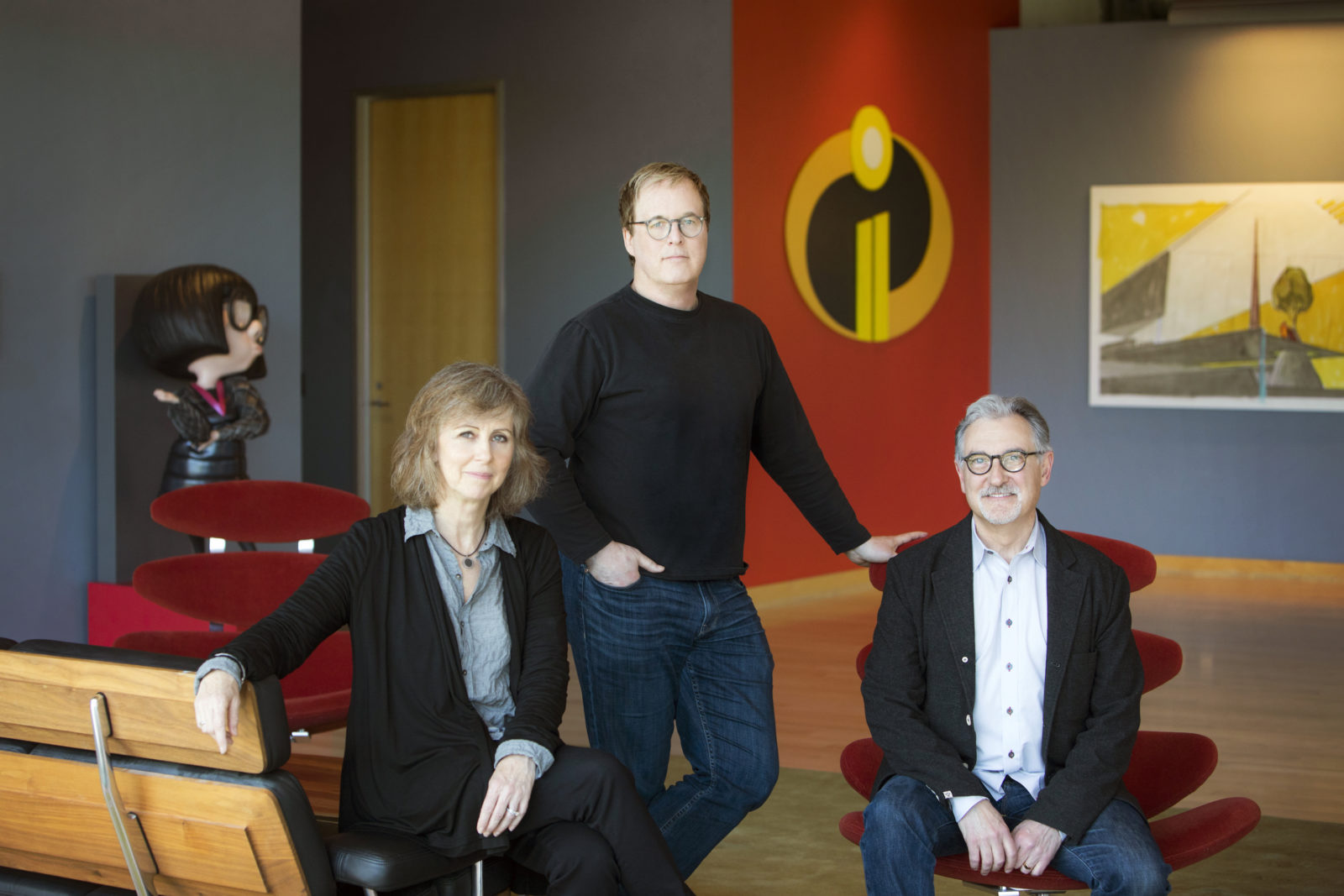 The first time I saw Brad Bird in person was at a WGA screening of The Incredibles 14 years ago. He stayed after the screening to answer questions from the audience and I was awestruck because I had just seen one of the most perfect films I’d ever watched.

I wasn’t thinking of that when I sat down for a short chat with Bird and producers Nicole Grindle and John Walker, but I was thinking about the footage from Incredibles 2 that I had a chance to see the night before. What I saw had me thinking that the new film was definitely going to measure up to the first film visually, with a richer, more three-dimensional look, and at least one incredible action sequence (that I can’t talk about yet). Also, the story, which finds Dad at home with the kids and Mrs. Incredible—or, rather, Elastigirl—back in action, is certainly a story for the post-Woman’s March world.

That said, I couldn’t help but feel that, once again, the world presented, from what I saw, was not as diverse as it could be. In the background, yes, but among the main characters, no. I asked the filmmakers directly, while acknowledging Frozone as an excellent character, if they see Pixar taking more deliberate steps to feature a more diverse group of main characters in the future.

Nicole Grindle: We definitely paid attention to it In Incredibles 2.

Brad Bird: I think that the best way to approach it is to get creatives who are from a lot of different places–

Bird: And then ask them what moves them, what ideas do they want to see on the screen, rather than imposing, for instance, “You need to have 20 percent Asians,” etc. No filmmaker looks forward to being dictated to. I think already you’re seeing – I think Pixar’s got a very good history with films like Coco –

Grindle: And let me just say that the company’s been really deliberate the last few years in cultivating more filmmakers. For instance, more female filmmakers, among whom Domee has risen. We’ve been consciously trying to accelerate their opportunities to direct. That was conscious. And the hiring and recruiting has been conscious, and the idea is to put more diverse filmmakers and storytellers in place because—

DaVette: That’s where the stories come from.

Bird: Yeah! You don’t have to tell Domee to make a film that has Asians in it because that’s what comes naturally to her. So in that instance it doesn’t have the feeling of “You must have blah blah blah…”

It’s more, “Hey you got any stories that interest you?“ and they go, “Yes!” and that’s what comes out of it. So, I think we are interested in storytellers and the more different kind of stories we can tell, the more our crews are engaged…I think that we’re greedy about having interesting stories. And they do a film like Coco where everyone gets to learn about those customs, it enriches everyone. And that makes those filmmakers better storytellers for whatever the next project [is]. So, the best way into it is [to] bring diverse storytellers and then let it be organic from there.

Getting back to Incredibles 2, my next question was about “Honey”, the often-heard-but-never-seen wife of the awesome character Frozone, voiced by Samuel Jackson. Based on the actress’ voice, we can assume that Honey, like Frozone, is African-American.

In an activity that was a part of the press event I was attending at Pixar that day, we were allowed to create our own Super. So I made Honey. Of course, I brought it to my interview to show Bird and the producers who, probably having had lots of experience with their kids, ooh-ed and ahh-ed over my construction paper creation. Then I asked my million-dollar question, “Where’s Honey?”

Grindle: There was a minute, there was-

Walker: There was a whole opening sequence-

Bird: There was a whole opening sequence that had her in it.

DaVette: Really? Believe me that there are a lot people like me out there wondering if we will ever see her.

Bird: Well, you can see one of the scenes on the Blu-ray.

Walker: Yeah, we’ll have one.

Bird: It’s just a storyboard, but it’ll show were we could have gone. It was entertaining, but it just didn’t fit.

On the subject of how a film gets made, I commented that the first Incredibles flowed so beautifully, it felt like a story that was “born, fully-formed,” so I asked if the story for Incredibles 2 came as easily to him.

Bird: [laughs] I’m glad it looks that way! Yes, it all just fell from the sky with no suffering at all!

No, in fact, this film was probably the most difficult to write. When a shorter production schedule meets a complicated universe (laughs) people are gonna get hurt somewhere along the line. Nicole described the process as passing a kidney stone through the system. So, like, eight months ago, the kidney stone was with the writer and I was going, “Aaaahhrgh! And then it passed into animation and they were all going “Aaaahhrgh.” And now the screaming you hear is in rendering—

Bird: Lighting and rendering is going “Aaaahhrgh!” And so that’s kind of what it’s like.

But I don’t know if the answers I have are perfect. It was always a wrestling match between clarity and pace. And I kept going, “Is that clear?”, and they’d go, “No we don’t understand x, y, and z.” And I’d over-explain it and then I’d pull out things out for pace, because now it’s taking too long. And there is this zen point, and it’s different on every film, and it’s really hard to find, between getting enough information so the people understand what’s going on, and pace. You may have a perfectly rational idea, but you can kill the thing by explaining too much. So those two things are always fighting each other. And finding that zen point between [explaining] just enough and not anymore and keeping everything going at a clip is really hard. And it never gets easier.

At this point we all agreed that writing is hard and writers are always unhappy, so I decided to end the interview with something light and asked Bird who his favorite character was in Incredibles 2. Of course, he said he didn’t have one, he loved them all, even the new ones.

Bird: If you mashed them all together, I would feel genuine love for whatever that was. They are different parts of my personality or my experience. I see my wife in Elastigirl, and a little bit of my mom, two strong characters that will face down anybody. Dash is the annoying little brother that I was to my older sisters in some ways. And Bob is me at my strongest and most bumbling and my dad in some ways when you get kind of perplexed at the world when it doesn’t operate exactly [in dad voice:] “The way you said it would!” Frozone is the best friend who’s always there through thick and thin, even though they know about all your shit.

Grindle: And seems like he has it completely together and is perfect, from your perspective.

Bird: There’s a little bit of something I’ve experienced, or felt, in all the characters, even the new ones.

In “Incredibles 2,” Helen (voice of Holly Hunter) is called on to lead a campaign to bring Supers back, while Bob (voice of Craig T. Nelson) navigates the day-to-day heroics of “normal” life at home with Violet (voice of Sarah Vowell), Dash (voice of Huck Milner) and baby Jack-Jack—whose super powers are about to be discovered. Their mission is derailed, however, when a new villain emerges with a brilliant and dangerous plot that threatens everything. But the Parrs don’t shy away from a challenge, especially with Frozone (voice of Samuel L. Jackson) by their side. That’s what makes this family so Incredible.