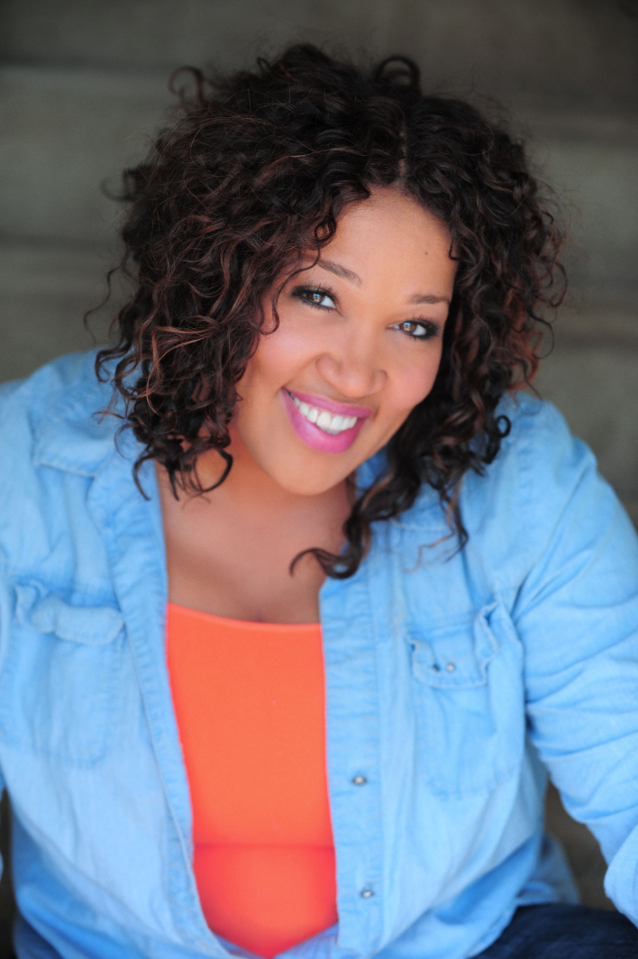 Fan-favorite Kym Whitley is no stranger to the science of comedy.  But what if I told you that she is hosting an event that combines science WITH comedy? Literally! Co-hosting is David A. Arnold, and both will headline the event along with Emmy-Award winning actress, author and comedian Sherri Shepherd to host the inaugural comedy special Lipstick ‘N Laughter Thursday, July 5th at the Joy Theater in New Orleans.  Held during the 2018 Essence Festival, the comedy special celebrates established female comedians and offers a new platform for emerging talent.

I had the chance to speak with Kym about the impending event and the importance of seeing more women of color in comedy.

BGN: You’re headlining the Lipstick ‘N Laughter Comedy Showcase, which is coming up July 5th. Can you share with our readers a little bit about the theme behind this show and what you plan to joke about?

Kym: Well, it’s a very interesting concept, but there will be a new lipstick liner that’s being introduced that are chemical free. And what better way to bring awareness to things but with laughter, with comedy? To get people’s attention. There’s a group of chemists that have gotten together, and found out that the chemicals that lipsticks have in it now are affecting women of color. And so they’re going to launch that, they’re gonna have lipstick bars around, and lipstick giveaways, non-chemical new lipsticks. And it’s just gonna be a night of lipstick and laughter.

Me, and David A. Arnold, Sherri Shepherd, of course, all friends, will be on the stage. Me and David are in a duo show called, “He Said, She Said,”, which is a two-comics on stage at the same time. Where I will go out first, and then he will go out, then I’ll come back out on stage with him, and we’ll do some comedy at the same time, together.

Sherri Shepherd is hosting the show, and it also brings awareness, it also brings to light, comics that I would say are less known. That’s one thing I like about this show, that it’s, I don’t wanna say old comics, but seasoned comics, and new comics. Like there’s gonna be Pretty Ricky, she’s pretty new, Geneva Joy who is a local comic in New Orleans, and Maija DiGiorgio, who is a comic here in Los Angeles. So it’s gonna be a whole bunch of women and one dude. So you know, we’re just looking forward to it. The show is starting at 8 o’clock, it’s on July 5th, and it’s at the Joy Theater in New Orleans. I like to look at it as the kickoff to Essence. 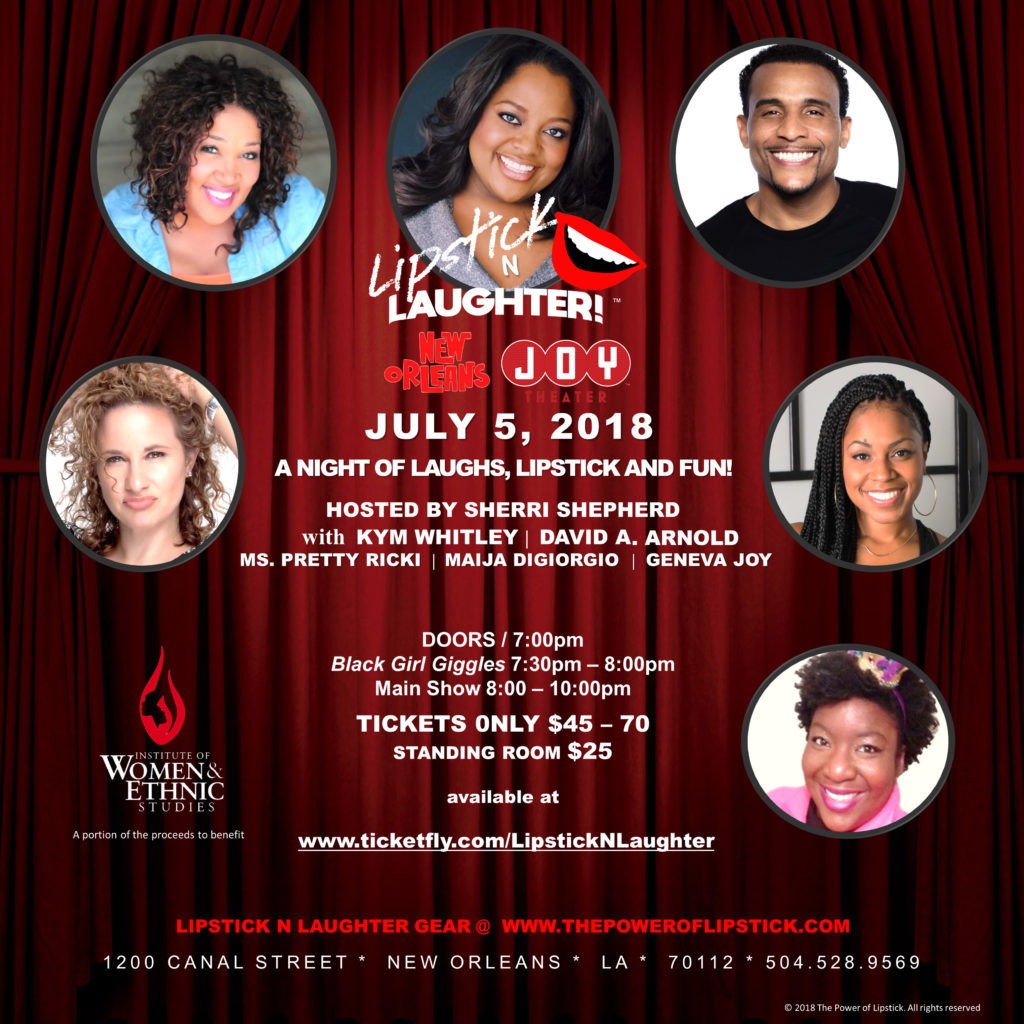 BGN: I’m really curious to learn a little bit more about these lipstick products that you mentioned are toxic to women. I’m a huge fan of lipsticks, like I have a huge display on my bathroom counter right now with different kinds of lipsticks, lip balms, and glosses. Can you talk a little more about the toxins, or what exactly are you guys discussing about what’s in these lipsticks that are harmful to women?

Kym: Well, since I’m not a chemist, I don’t even wanna begin talking about that because they have not discussed it, and I don’t know all of the names that are in it. But, when they told me it was just very interesting hearing that you’re putting lipstick on every single day and don’t even know what’s in it. And I never thought that there would be something in the lipstick because not only do we put lipstick on our lips but we drink with it, we lick it, that’s like the immediate source right into our bodies. And you know, we’re too trusting as a society.

We just put stuff on, don’t even think about it because we trust, we trust that the FDA and people are going to take care of us. But we really have to take care of ourselves. We have to start looking at things. Even like the hair products, you know there’s all lot of that, we use hair products all the time. Even the other day, I kept dye on, and I was like, “Why do I keep dye on my hair this long?” It’s going into your brain!

They’re just starting to bring this awareness about chemicals to the forefront. I think that’s what really important, to have this kickoff. And they’re gonna have, I think, some lipstick bars in New Orleans. I don’t think it’s like a whole line of lipsticks, but it’s three colors to start with.

BGN: Well, that’s interesting to know and I know what’s also really interesting and pretty profound is there’s going to be a lot of young, budding comedians, or comediennes I should say — that will be there at this event. How important is it for you to support budding female comedians?

Kym: Well that’s really important because female comics are not… I almost wanna say respected but we’re still young and the female comics are not the first ones to get the gigs. They’re not the first ones. We look at these tours like Girls Night Out Tour, and then you look at the tours D.L. Hughley, Ricky Smiley, they’re on, you know, they’re sold out. It’s difficult for female comics for whatever reason, we’re just as funny. People just don’t say, “Ooh, female comics,” you know, it’s just not there yet. So it’s really important to bring some of these funny ladies to people’s attention.

BGN: I also read that twenty-five percent of U.S. comedians are women of color and less than that number are actual writers. How can we change these numbers?

Kym: Wow. Well, all you do is encourage women to go out and do standup. Writers, I don’t think there’s any problem with being a writer, because a lot of the male comics are writers on these TV shows, like David A. Arnold, for example. He’s on a show called Fuller House, that has come back, but he writes on that show every day, Monday through Friday, he’s a writer cause he’s gotta feed his family. And then he goes on the road for the weekend. How to change those numbers, people have to go out and support female comics. It’s just what it is. Just like the men. But they have to still give us TV shows. That’s the engine that helps you do standup. If I’m on a television show, you’re gonna go see me in the club. If not on the TV show, it’s less likely that people come to see you.

BGN: Right, and by TV shows, you mean not only sitcoms — but also standup comedy concerts. You see all of these male comedians like W. Kamau Bell, Kevin Hart, and Chris Rock getting these Netflix specials but, where are the women?

Kym: There are women. So that’s the thing to make sure. One, I guess we could say, one helps the other, you know, one fuels the other. It’s a vicious cycle. Just get women on these Netflix specials, you know.

BGN: Right, right. So last question: your comedy show is going to benefit the Institute of Women and Ethnic Studies. Can you tell us a little bit more about that organization or do you have any knowledge about what they do and why it’s important for your event to support this organization?

Kym: Well, the organization is definitely something that I don’t know all the information about it. They usually just give me some insight into it. But, the organization is definitely at the forefront of getting these lipsticks and these chemicals and comedy. But what I find is really interesting is these women are interested in promoting women of color in comedy. They partnered with some scientists to help with these products. That’s pretty much it but since you asked me that question, I’m going to go learn more about them today.

BGN: I think it’s a beautiful thing that science is being partnered with comedy. I never thought that those two areas would create some synergy together but it’s exciting to see that your show is bringing that to the table and, hey, for us here at Black Girl Nerds, that’s a big deal, so I hope to see that this becomes a trend with more shows in the future.

Kym: It’s very interesting. How do you mix those two, you know? That’s what makes that interesting right there because I said this isn’t laughter and then you have the Institute you can have the science part of it. And that we’re doing it in New Orleans and that we’re doing it right before Essence. But one thing I do know is, they did this all, you know after, a lot of things came out of, Hurricane Katrina. It’s definitely helping Ethnic Women and Studies and maybe it came out of Hurricane Katrina because you know, things in the water and how that hurricane affected women of color.

BGN: Kym, thank you so much for taking the time to talk to us, it was really great chatting with you. And all the best for your event coming up this week.

Kym: Well thank you very much. I wanna make sure people know where to get their tickets. They can get it at thejoytheater.com, for their tickets and also on Instagram. It is on July 5 and that is 8 p.m. in New Orleans kicking off the Essence Festival and it’ll be a great show.

Tickets are available at www.thejoytheater.com. Doors will open at 7:00pm, CT.