BGN had the opportunity to catch up with director Nijla Mu’min again after the successful premiere of her film Jinn at SXSW.

Jinn is a coming of age film that centers around Summer (Zoe Renee), a senior in high school trying to find her place in the world. In the film, we follow Summer’s exploration through her Black Muslim experience, her love of dance, and her sexuality. Writer and Director Nijla Mu’min, drew from her own experiences to create Jinn, which has a beautiful style of writing with its own unique rhythm.

Nijla Mu’min wrote the script in 2015, and over the summer she connected with the film’s producer who loved it. From there they began working on financing. Fundraising for the film started with kickstarter campaigns and grants as well as pitching the film to investors. In 2018, Jinn premiered at the SXSW Film Festival, where it won the Special Jury Recognition Award for Writing. Jinn also made its debut at American Black Film Festival (ABFF) and went on to win the Best Screenplay Award and the NBC Spotlight Actor Award was given to, Zoe Renee. Jinn also won an award at the Blackstar Film Festival – Best Narrative Film & Audience Award – Narrative Feature. 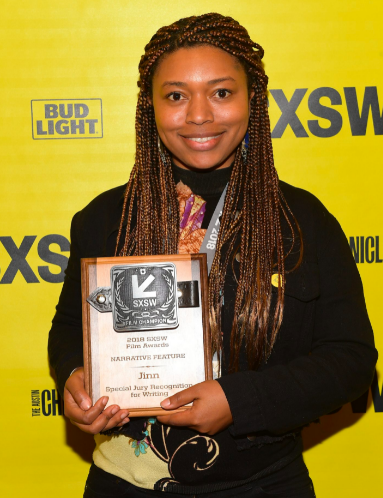 Jinn explores the dichotomy of Summer’s mother Jade (Simone Missick) and Summer’s relationship. At the end of the film, Summer recites a moving poem to summarize the  contentious relationship with her and her mother. She uses language directly from her teachings of the Quran. In Summer’s poem, her mother is made of clay and she is made of a smokeless fire.

Nijla Mu’min further simplified Summer’s poem by explaining Jade, whom is made of clay, “is representative of someone who is more stable and typical of a traditional path. Summer, whom is make of a smokeless fire is unbound and tends to not stay on the traditional path.”

Other than the common teenage daughter and mother contentious angst, Jinn makes a non-judgemental stance for both ladies. A large part of Jade and Summer’s discord is due to misunderstanding and miscommunication. They approach life differently, so it only makes sense that they would approach their new spiritual journeys differently. However, they are both desperately seeking an allyship from one another, so they ultimately get frustrated with one another’s counter approaches and take each other’s adverse actions as personal attacks.

Throughout Jinn, Jade seems to be resolute that she has finally found a spiritual home as a Muslimah. However, Summer and her father David (Dorian Missick) allude to the fact that Jade is someone constantly looking for rediscovery and the next “thing” to explore. Although, they seem to have little faith in Jade’s new religious direction, Jade continues steadfast on her journey throughout the film.

I spoke with Nijla Mu’min about what she believes Jade’s journey is beyond the timeline of the film. She shared, “even though  Jade has a strict interpretation of the Quran after converting to Islam, she believes that five years down the road Jade is still a practicing Muslim and has found a new, less strict rhythm to her spiritual journey.”

After watching the film, I must say there are plenty of elements that I think people can walk away with. The film is gentle to each character’s perspective, so I can understand why there are so many varying interpretations of Jinn.

Nijla Mu’min shared that she is happy that there are so many interpretations of the film and that she wants the audience “to walk away mostly with an emotional connection to the characters of Jinn.” Nijla Mu’min also hopes that the film showcases that identity is complicated and that Jinn encourages people to be more empathetic towards different people.

Whats Next for Nijla Mu’min?

Jinn is the first feature film for Nijla Mu’min, but if you check out her website, www.nijlamumin.com you will stumble upon a couple of short films that she created. My personal favorite of her collection is a short film titled, Deluge. Deluge, is a short drama with a fantasy element that sparked my interest immediately (black mermaids + brief historical reference).

I spoke with Nijla Mu’min about what is next for her and if she wanted to do more fantasy or Sci-Fi films. She would like to re-explore her short Deluge and  like to create grounded Sci-Fi projects. Also, t because she feels as though she has a good grasp on characters, she feels like she can create or work on Sci-Fi and fantasy projects.  While she is open to the idea (and I would love to see her create in that genre), the hindrance of fantasy and Sci-Fi films is that they take a lot of funding. Jinn is currently in select theaters and Nijla Mu’min has proven to be a captivating filmmaker on the rise!