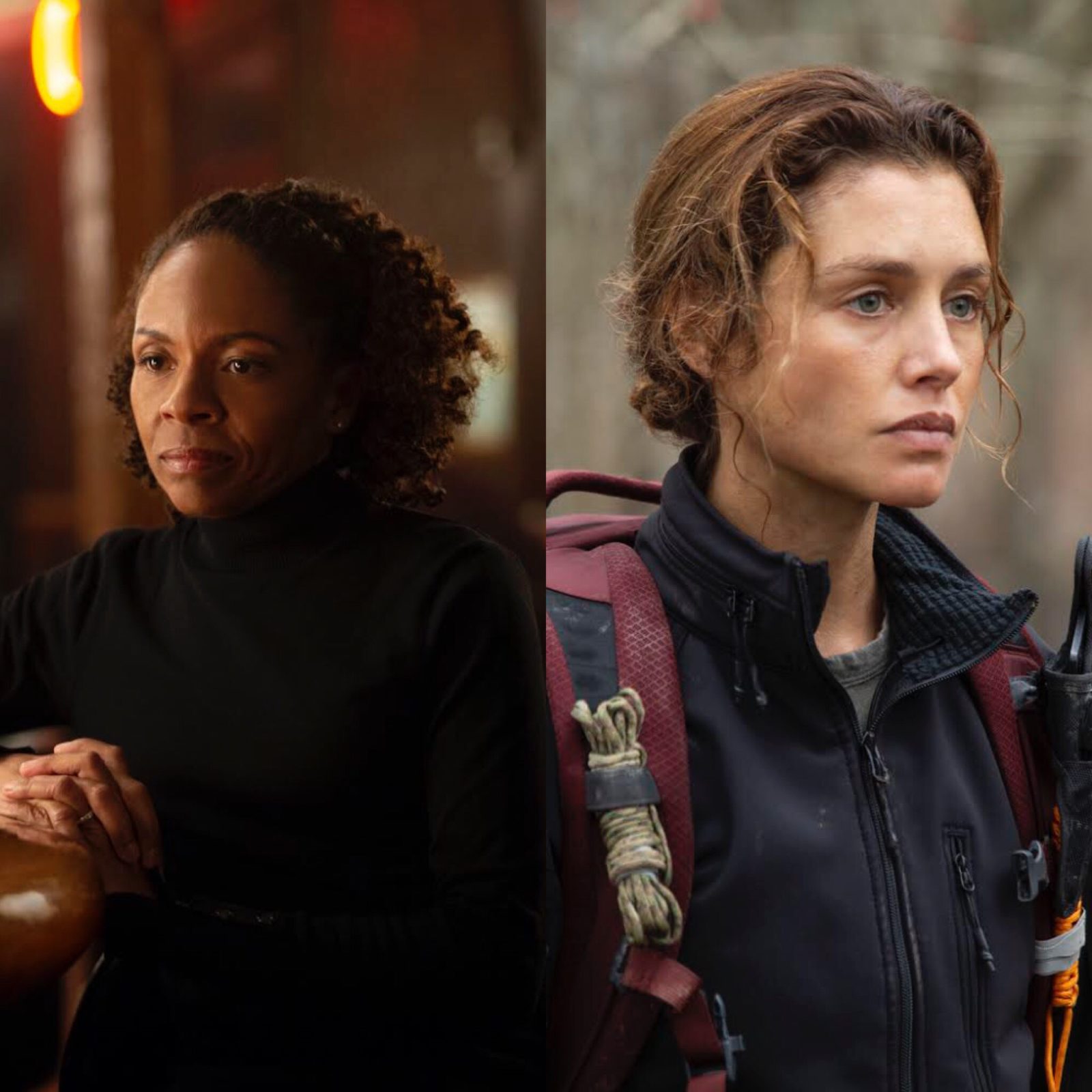 Hulu’s The First is part serial drama, part science fiction albeit not too far into the future. The drama unfolds around the lives of astronauts readying for a trip to Mars. Written by House of Cards creator Beau Willimon, it has a stellar cast that includes Natascha McElhone, LisaGay Hamilton, Sean Penn, Melissa George Hannah Ware, and Oded Fehr.

BGN interviewed Hannah Ware and LisaGay Hamilton. Hamilton’s frank take on the state of working actresses of color of a certain age in Hollywood, is worth a read-through.

Lisa, so good to see you on screen. What was it that fascinated you about this character?

There was no script initially and so it was Beau who verbally pitched the show to me and pitched the script—don’t get me wrong, I had to audition but there was no script to tell me who this character really, really was. It wasn’t until Beau talked about her and, what you see on the screen is what Beau pitched to me, which is so exciting. He said, ‘Look, here’s this woman; she’s Black, she’s queer and she’s a commander and in many ways she’s overqualified.

And, what does that mean for her as her career has evolved? In this particular instance, she gets burnt from [being] the commander of this commission, and what was that experience like and giving the character the screen time to explore that with her wife, whom she’s been with for many, many years and who is in a stable, loving relationship.

So I was interested because that storyline existed and there was a genuine interest to explore all those issues in a way that was meaningful and articulated and artful and I just really appreciated the storyline because I think it grounded the show, no pun intended, that The [year] 2030 is kind of irrelevant. It may be relevant in terms of technology but all the ‘isms still exist. She struggled and struggled and continues to struggle. I was just really, very appreciative that Beau was able to give that as a major crosspoint in the series.

What were your thoughts about how to play someone second in command?

As a Black woman, the character wasn’t far fetched. It’s not like I had to dig somewhere to find her. I live it and as sad as it is that I live that, it’s also triumphant in that I’m still here, right?  I’m still here trying to do my thing.

The part about being a commander wasn’t really in my body right away. I had to sort of find that quality and had to try to pick that up and having (Canadian astronaut) Chris Hadfield and having astronauts on set gave me the blueprint to find my way in playing the commander of a mission.

You have an illustrious career that spans so many decades, how does an actress of color do that? How did you do that?

It’s always been fascinating to me that whomever is on the outside have a perception of whomever is in front of them and not knowing what the journey is like.

I am still a f—ing struggling actor, period. I am not given a role and a lot of the times I don’t work. One year I lost my health insurance so it’s nice that people think I’ve had this illustrious career and trust me, I wouldn’t change one thing on my resume, especially my theater experience but it is a struggle.

I can’t tell you how many therapists I’ve played and commanders I’ve played that are head of the squad. So what was so beautiful about this particular role was that it was a person who had a sex life. It was a person who had a relationship. It was a full-fledged person so that was also what really attracted me to the role. I am grateful for everything on my resume but I haven’t worked since we ended. I did one little thing for Facebook but it’s not like I am choosing my scripts and can be like, ‘Oh yeah, I can do this.’ You know, they only let a few of us in that can do that and Viola (Davis) doesn’t get to play everything that she wants to play.

So it’s not fun and games, especially a woman of a certain age.

When I say illustrious, I mean surviving because there is a great deal of beauty in that. I remember years ago you playing parts and I can see you now, playing parts so …

From my first role in Krush Groove with The Fat Boys to The First, it’s been a journey and I am humbled by my journey and I may sound a little pissy because I still have to work so hard to get work! Not that I am supposed to be anybody so special but you go in front of a 25-year-old director of an independent film and he goes, ‘What’s your name, you just want to go, ‘C’mon man! I’ve been around so long and you don’t know who I am, but that will never end. That just comes with the territory.

Do you have an interest in space or science?

No, nope. I really haven’t given it any thought. It didn’t occur to me.

Finally, can you give us a little hint about your upcoming role as Condoleezza Rice?

Yeah, it was a very small role and I had to say, sadly, the movie is about (Dick) Cheney and they really did eliminate Condoleeza Rice as a part of that. They went through a lot of effort through prosthetics and hair and really tried to age me and try to make me look like her but she’s not really in it all that much.

I’m grateful to have been in such a A-team cast but it’s a quickie. It was fun to research to try to play her. That was my third audition to try to play Condoleezza Rice. I don’t know if I succeeded but I’d love to play her in a grander way.

Hannah, in your own words, describe your role?

I play the role of Sadie Hewitt who is one of the astronauts from a purely scientific background. I’m a geologist and have a doctorate in biology and I have done extensive work in Antarctica. I am recruited by Lisa’s character, Kayla, to be the main scientist who is in charge of finding life on Mars, so I have a really exciting role on the crew but I have the least experience and faith. So there is that dichotomy of being very expert in this area that none of the other crew are but not having the practical experience and feeling slightly inferior in that way.

How many, if any, space/astronaut, films have you watched?

I watched countless when I got the role, I researched in lots of ways but part of the research was watching every single space film. I think I might have seen them all now. There were so many. I’ve even watched the really bad ones. I’ve watched every single thing, basically.

We watched 2001: A Space Odyssey. I should have watched that on the big screen instead of a laptop.

Do you have any that stand out?

2001: A Space Odyssey is actually stunning and such a pioneering film, also The Right Stuff.

Did you talk with any families of astronaut for the role?

Yeah, Sandy Magnus, who is really, really helpful and also (scientist) Jennifer Eigenbrode. They were very different. I read a lot of books on astronauts and how they pick them. It seems there really is an approach to dealing with tasks and emotions that … I need to articulate this better. There’s a certain sort of emotion that [Sandy] and other astronauts had that I really wanted to capture. It’s a quiet sense of being able to prioritize and due diligence that I find quite bare in other professions.

Acting-wise, give us your thoughts on working with LisaGay and with Sean Penn?

Lisa is a dream to work with because as an actor, she’s real deal. You get on sets where actors don’t care that much about the work, so it’s always easier when the person you are acting with is really good. It helps enormously in a way that you didn’t plan for because the thing can go to its own place.

Also, there was a morning where I was really struggling and when you see another actor struggling, you’ve got to work it through your mind and you’ve got one more take, and there was something that Lisa said to me that helped me so much and I got it and if she hadn’t been there, I’m not sure I would have.

What I find so heartbreaking is that I prep so much and I put in effort but it’s like being an astronaut, there’s worse case scenario and often you’ve got like five minutes to do the thing you’ve visualized for so long and you wanted it to go a certain way and now they’ve rearranged the whole scene and you’re giving it against the wall instead of how it was written and it can really screw with you so it’s always important to have a cast member there who gets it.

Sean, it was wonderful to watch him act. He’s such a team player and so serious about the work and I found that really inspiring.

What is up next for you?

I’ve got this film on Netflix called The Angel and it’s based on a true story about this Egyptian spy in the Yom Kippur War, clearly from the seventies and I play something so far from an astronaut. I play a sort of floozy actress who throws sex parties, with white blonde hair. I’ve never played a fun role so it was really … interesting.

The First made its premiere September 14th and is currently streaming on Hulu.