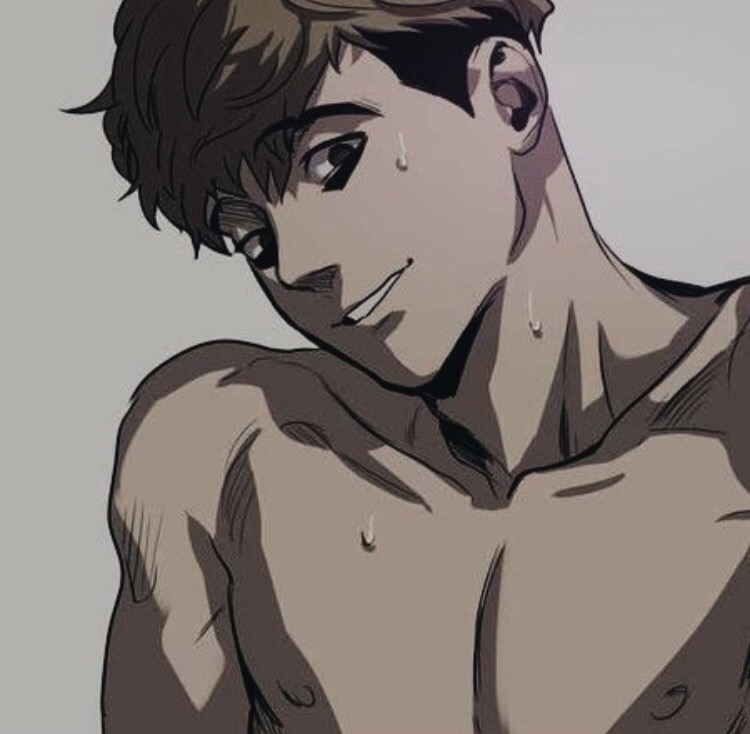 It’s not a romance. Let’s get that out of the way right now. Killing Stalking, a manga created by the artist Koogi, is a tale best described as a psychological horror. One cannot call this story of two deeply troubled individuals, one with severely obsessive tendencies, and another who is a sadistic lunatic, a romance. There is a special, codependent bond between the two characters, complete with plenty of great sexual contact, but there is no love. It’s all so incredibly unhealthy and wrong.

We begin our increasingly bloody and suspenseful journey with Yoon Bum, a skinny, non-threatening guy who chats us up about his secret crush. He speaks of how he follows his crush, a hot guy by the name of Sangwoo (with dreamy, tousled two-toned hair and cool ear plugs) on social media. Yoon Bum tells us that he doesn’t want his crush to know of his profile creeping, for fear of being labeled a stalker. Many of us have used such hyperbolic language when describing what just simple profile browsing is, so this admission does not come off as particularly alarming. In fact, it makes Yoon Bum seem relatable.

And then that shit goes past being a typical millennial with an infatuation and internet access right into “What the fuck are you doing?” territory. Yoon Bum is stalking his Sangwoo. As in physically tracking him and using some CSI style moves to gain access into Sangwoo’s home eventually. He becomes a lot less relatable, as most of us aren’t spending months trying to decipher the security code of our crush’s home. He claims he’s doing it out of love, a justification that he offers more than once for his completely inappropriate behavior. It turns out that the cause of Yoon Bum’s obsession was that Sangwoo happened to intervene during the would-be rape of Yoon Bum, thwarting the rapist’s plans. In this way, I felt for Yoon Bum, and I’m sure most people would. It illustrates the power and pitfalls of pity; we shouldn’t excuse Yoon Bum’s behavior because we feel sorry for him. Stalking is still, you know, fucking creepy and wrong. It’s possible to feel sympathy for someone who is engaging in the fucked up behavior and still fully acknowledge that they’re participating in said shit behavior. Allowing sympathy to cloud one’s judgment and overlook morality is a dangerous game. In fact, it can be hazardous as putting a complete stranger on a pedestal, the way Yoon Bum does with Sangwoo.

Despite never having spoken to him, Yoon Bum builds up Sangwoo as this perfect, unattainable deity of light and goodness and masturbatory material. It’s quite disturbing to behold, and the whole time I couldn’t help feeling sorry for Yoon Bum, even as I was cringing at his creepiness. Koogi does a decent job of evoking the right amounts sympathy, empathy, and morbid curiosity in how Yoon Bum’s thoughts and actions are presented. As utterly pitiful as he is, he seems real. I sometimes found myself thinking that Yoon Bum is not a bad guy, just a lost, pathetic one, even as I watched him do things I would undoubtedly categorize as bad. I like stories that can mess with me in that way, playing with my mind and causing me to let my guard down before I’ve even fully realized what I’ve made allowances for.

And then we meet Sangwoo. He is, inevitably, not nearly as perfect Yoon Bum had imagined. Yeah, he’s still kind of sexy up close, but he’s no god. He’s a flawed human being. And I mean fucking flawed. The Sangwoo who Yoon Bum finally manages to speak to perverts with an insatiable bloodlust large enough to rival an entire coven of horny psychotic vampires. Yes, he is still really hot. Yes, he can be quite charismatic. And yes, that is blood on his shirt. Much in the way Yoon Bum is written as a believable character, Sangwoo is a great antagonist. His evil is appalling and stomach churning, yet he is still entirely human. His moods are ever changing, and his motive is not clear. You know how typical archetypal villains have a clear goal, lurking in the shadows and twirling their mustaches diabolically? Sangwoo is not that guy. We don’t know what his goal is, and his disposition changes often enough to create suspense and breathe life into what could have been just another boring bad guy. He is not consistent in his cruelty, but he is still very very bad. And we begin to learn why piece by piece…or do we? How much can we blame a bad childhood on the creation of a monster? What about all the people with terrible backgrounds grew up to become decent individuals? When does a horrible history cease to become the justification for heinous actions?

I like that Killing Stalking makes me ask these questions. I like that that it keeps me on my toes. I like the creator’s ability to make me feel brief sympathy for Sangwoo, although he makes my skin crawl. I’m also a sucker for stories with attractive antagonists. It’s a cop out to intentionally create unattractive villains. Most societies place such emphasis on looks that we are more willing to accept shitty things from beautiful people, while we are more ready to condemn those we deem unappealing for even a minor faux pas. Having a “beautiful” villain plays into the whole theme of making allowances for things we shouldn’t, only to end up being brutally reminded of exactly why we shouldn’t. It’s the definition of a psychological thriller. It’s a mindfuck, and I couldn’t stop reading until I’d poured over every currently available chapter. Even now, I’ve refreshed my MangaFox app several times in hopes to see that a new chapter has been added so that I can find out what the fuck happens next. I’m not alone in this; ask anyone you know who has read Killing Stalking and you will immediately see how useful the element of suspense is here.

While it’s obvious that I’m hooked, I would not go as far to say that Killing Stalking is a must read for everyone. The subject matter alone is enough to put anyone off rightfully, and then there’s the way it handles the issue of homosexuality thus far. Fourteen chapters in, there isn’t a positive portrayal of homosexuality. Yoon Bum is an obsessive stalker who spends months trying to break into the home of a man he doesn’t know, yet is convinced he loves. Then there’s Yoon Bum’s would-be army rapist. And the man Sangwoo picks up at the gay bar, who is a cowardly adulterer with a wife and kids. Sangwoo himself is a goddamn serial killer, torturer, and sexual predator who exhibits homophobia even as he willfully engages in homosexual acts. We don’t yet know the sexuality of the police officer who is onto Sangwoo, and he seems to be the only other character of significance which isn’t plagued by deep psychological and moral fuckery. It’s kind questionable that the one decent guy we’ve met so far in the story is also the one guy we have yet to see engaging in sort any sexual acts, let alone queer ones. The story isn’t over yet, so there could be a purpose to all this. Whether or not it will be well executed remains to be seen. It’s a fine line to walk, as there are already so many tragedies involving LGBTQ characters in media. It’s something to consider before deciding to read.

There’s also the growing fandom, a good chunk of which seems hellbent on trying to “ship” Sangwoo and Yoon Bum. Rooting for two characters to be together based solely on sexual chemistry is one thing. Everyone wants to see hot people be together, no big deal. It’s another when that relationship is a graphic illustration of blatant mental, emotional, and physical abuse. These characters aren’t meant to be admired or exhaulted. Their relationship is not intended to be something the reader wants. There’s nothing for them to work out. Sangwoo will not help Yoon Bum become less of a pitiful creep; likewise, Yoon Bum will not cure Sangwoo of his pure sadism and psychological issues. Relationships cannot cure mental illness (but a healthy relationship can help you find strength within yourself), and I say that speaking from personal experience. That’s not the message this manga is sending, and I worry for those who are hellbent on trying to prove otherwise.

All that said, do I recommend it?

Possibly. The subject matter can be too much for some. There’s no shortage of gore, depictions of sex and sexual violence, examples of psychological trauma and abuse, and unpleasant things. I don’t celebrate or applaud any of these things; they’re scary. On more than one occasion, I couldn’t help but notice the parallels between Sangwoo and Yoon Boom’s relationship, and a past relationship of mine that was also psychologically unhealthy. So no, I don’t “ship” Yoon and Sangwoo. I don’t find their relationship to be redemptive or otherwise beneficial to either party; it’s unarguably wrong. Killing Stalking can best be described as a good read about bad things. It doesn’t glorify or romanticize these things but presents them for what they are as we swipe to the next page, feeling equal parts anxiousness and dread. It probably goes without saying, but this is not light reading. If any of the themes and subject matter are things you cannot deal with, I suggest staying away for your well-being. If you enjoy disturbing (yet thought-provoking) psychological thrillers with a healthy dose of gore, and nail-biting suspense, then it’s worth a read.

As always, thanks for reading! If you like this review and want to see more in the future, please be sure to subscribe to my blog! You can also check me out in these places!