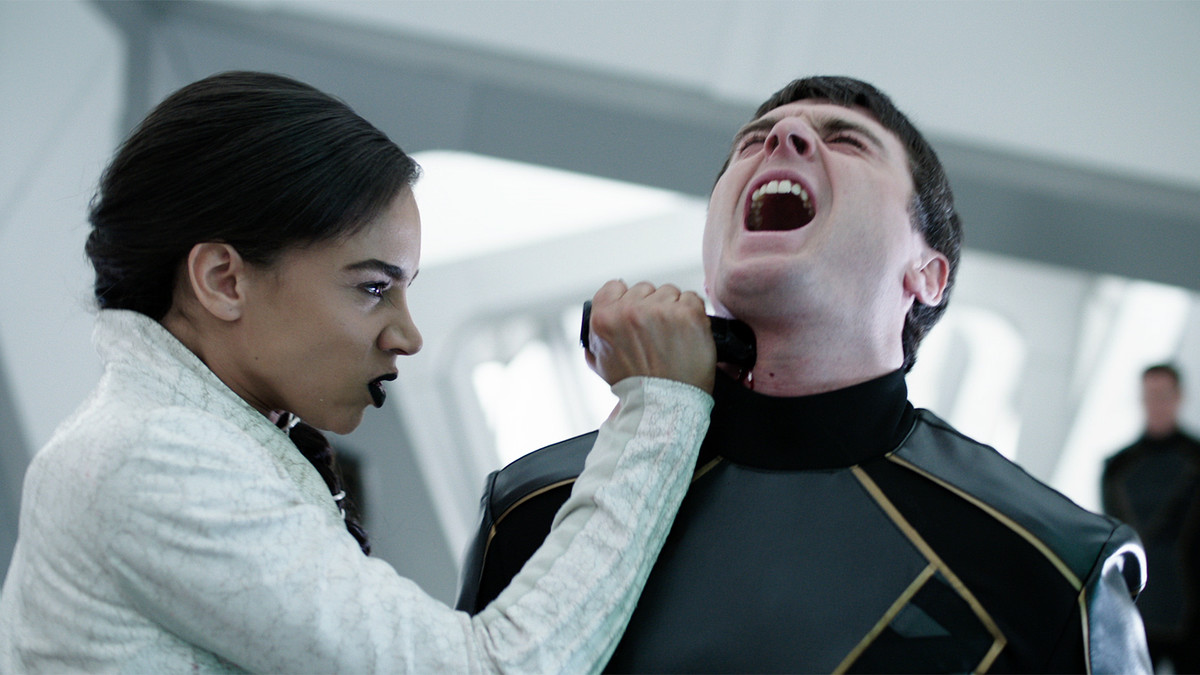 Clearly, the namesake for this episode is The Hills Have Eyes but I’ve never seen that before so for me, this was Killjoys Does the Fallout Series, [cue theme] “War… war never changes…” There are a lot of aesthetic nods, from the anachronism of having 1950s style pictures and holomodels to the fact that it takes place in an underground bunker. Hell, the above ground unseeing look vaguely like feral ghouls.

This was an interesting episode in that Dutch wasn’t much of a central figure, propelling the plot forward. Her job this outing was to wrangle up some essential back story and exposition for the audience, a task she does quite well. She still has some great character moments, like when she’s tied up and talking to the Last Seer and takes a pause before saying Khlyen is dead. This truth still hurts her. Also thanks to that conversation we know that thirty years prior Khlyen shut down this facility abruptly. We’re not quite sure why and we don’t know if there are other facilities like it all over the J.

The bulk of this episode plays in parallels. Delle Seyah is discovering her new life as a full-on hullen, seated precariously at Aneela’s side. New member, Zeph has a lot of unlearning and learning to do to fit into Team Awesome Force (TAF). And Johnny has to reintegrate himself back into the fold as well as navigating his feelings about being ‘replaced’. Also, D’av has some weird new scary thing going on, but as Johnny indelicately points out, that’s pretty much par for the course with D’av.

I mentioned in my season preview that Zeph is a character we’ve seen before but not in this way. We’ve seen the awkward but arrogant super genius who is unapologetically offputting but essential to the mission. I’ve never seen that person be a woman, however. Generally, female super geniuses are mousey and nervous or sex pots with glasses and short pencil skirts.

Zeph is certainly twitchy but she’s confident in her abilities, so much so she blows off direct orders, and risks her life to prove her theories. This is definitely a character flaw but as a woman, I instantly connect with her need to be the best in an environment poised to dismiss her out of hand. Look at what happened last week with Turin. She was the only one that actually proved themselves capable of being more than a lackey. Turin is even the person who insisted TAF needed an intellectual powerhouse but was ready to hand the mantle to the Mediocre Twins over a brilliant but raw recruit. Sure, ream her out, but don’t throw her away.

ALSO READ
Everything You Need to Know About When the 'Highlander' Series Went Femme Fatale
Enter Johnny. He has to impress upon her that being dependable is way more important than proving yourself right when you’re working in a team, especially one that’s in danger all of the time. I love the raw emotion Johnny conveys along with the sound advice. This is his family dammit, and he won’t have some upstart coming in and endangering their safety. Zeph gets to be unlikable, not tuned to the male gaze, and arrogantly smart. I, for one, am here for it.

Zeph at least has to contend with the wrath of an empathetic and compassionate man in Johnny but Delle Seyah, not so much. For a while, everything aboard the Hullen Armada is lovely and new. She is used to wielding power; everything she does and says reflects that. I would imagine any royal would slot themselves into dominating the servants, just as she does with Gander at first. You can just tell she’s about to overstep and be put in her place the whole time leading up to it actually happening. Doesn’t make it any less satisfying, possibly even more so.

I don’t anticipate Delle Seyah being out of her depth for too long, considering the politics of the Nine were also bloodsport. Just look at how deftly she handles Aneela in the end. Still, I enjoyed and would like to keep enjoying her and Gander’s teeth baring banter.