The name Angela Bassett has become synonymous with integrity, strength, and grace. And, with her forthcoming role as CIA Director, Erica Sloan, in Mission: Impossible-Fallout she continues to personify these very ideals. Bassett recently took time out to candidly speak with BGN about her upcoming projects, motherhood, integrity, and the power of owning your choices.

In Fallout, Ethan Hunt must race against time to prevent a global catastrophe, but not without the assistance of some trusted as well as a few unsuspecting allies along the way. Bassett is a new addition to the franchise, but her presence is undeniable in Fallout.

Lynnette: Hi Angela. How are you?

Angela: Good, and you?

Lynnette: Good. Congratulations on Mission: Impossible-Fallout! How did this role come to you? 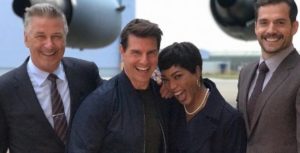 Angela: I’ve never gotten a call that early in the morning. It was the bewitching hours, before business hours, and they were offering me a role in Mission Impossible. I hadn’t had my coffee yet, and I was like, “What is that?” I couldn’t believe this Tom Cruise lead, mega-franchise that I have been familiar with… So they had to be talking about something else. Ergo my question, “What is that?” I was shocked.

Lynnette: How did you prepare for your role as the CIA director, Erica Sloan?

Angela: Initially, I did not have the script.  Eventually, when I received it, I saw that she was a complete ballsy, brilliant badass.

Lynnette: That leads to my next question. You have a history of playing strong multidimensional characters. Did you deliberately make a choice early on in your career about the types of images and roles that you wanted to portray, or did these types of roles come to you naturally?

Angela: I think who I am, my personality, my upbringing and my awareness of images influenced my path. I was raised by a single mom and inspired by a brilliant auntie. I’ve always had a strong regard and reverence to history and imagery.

Lynnette: What do you feel that you bring to the franchise?

Angela: I think because this character is me. Resembles me. The role looks like me. 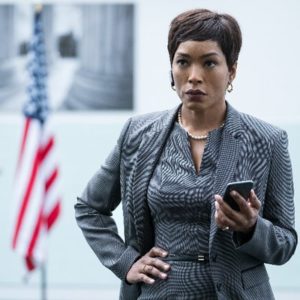 There’s a depth and a complexity to the role. You know, that a woman could ascend to this position of authority and power. There’s a wonder, a mystery, a mystique about her. It makes you wonder because it is unusual to see a woman like her, and who looks like her, sitting in this seat of power…occupying that space. This is not usually who you see occupying spaces of power. You, know, the Deputy Director of the CIA.

Lynnette: These types of images speak volumes. Are there any roles that you’ve regretted turning down and if so, why?

Lynnette: Are there any roles that you’ve regretted taking?

Angela: No. No. Be cool with your choices and move towards them. I feel if you’re tentative–if you don’t feel good about it–then don’t venture there. If you make a decision, then go proudly in that direction, no matter what naysayers might say. Make sure it’s your choice. I can be swayed by a great script. I love working with creative people. I love putting out ideas and messages that perhaps I believe in or think needs to be underscored. Even if it’s eight minutes up there on that big screen, or on a little screen or upon that stage. I’m not swayed by money. Money is at the bottom of that list is why I choose to do something. Integrity has to be at the top of why you do something.

Lynnette: What advice would you tell your younger self?

Angela: To be fluid. Be fluid in your craft. Try your best to be as fluid as you can be on stage, in film, and on television. Great stories are everywhere, and it’s a shame that we are put in these boxes. It’s a shame they place us in these boxes because we’re female, a certain age, a certain hue. So be as fluid, flexible, creative, imaginative, and as unhindered as you can, because there are others who will try and tie you down in this industry.

Lynnette: You are a mother now. What are some of your hopes, specifically for your daughter who will one day become a woman navigating in this world?

Lynnette: I love that. So many people have a platform, but there is no purpose attached to it.

Lynnette: Do you have any pearls of wisdom for women who fear aging?

Embrace your life, your maturity, your experience.  With age, comes a depth, a mystique, a mystery, a warmth to your maturity. Continue to grow, to learn, to look at things in a wondrous fashion. There’s wonder all about you. Maintain that adolescence.

Lynnette: Are there any upcoming new projects that you’re excited about, or that are in the works? 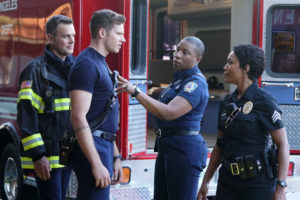 Angela: Yes. We are starting the 2ndseason of 9-1-1. Also, I just finished a Netflix project called Otherhood, which delves into the stage after motherhood, and addresses who we are when our kids have flown the nest, and we have to examine who we are once mothering is no longer part of our experience.

Lynnette: Can you complete the following sentence for me? Follow your heart and _________.

Angela: Follow your heart and enjoy this life. Yes, enjoy this beautiful life. Enjoy your beautiful and wondrous existence.

Lynnette: Nice. Thank you so much for your time today.

Lynnette: It was a pleasure.

Lynnette: Have a good day.