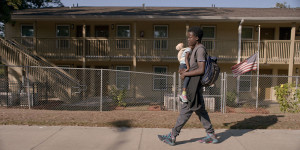 Life and Nothing More is an official selection in the Contemporary World Cinema category at the 2017 Toronto International Film Festival. Director Antonio Méndez Esparza (Aquí y Allá) and his cast made up of novice actors delve into the family dynamics of Andrew (Andrew Bleechington), his mother Regina (Regina Williams), and little sister Ry’nesia (Ry’nesia Chambers).

During the film there are many questions that arise; how many struggles can a single mother face without breaking down or giving up? What will she do when faced with constant challenges, both within and outside of her home?

At first glance there is an apparent dichotomy to Andrew. As with any teenager, he shows one face when with his friends. He wears his “tough guy” persona like a mask. But sometimes that mask slips, and a different side to Andrew is shown. We see insecurity, and his gentleness, his patience when he is around Ry’nesia. As a Black teenage male, Andrew is faced with many situations that, should he make the wrong choice, would change his life irrevocably. He has to decide if the words “you are your father’s son” will determine who he becomes. 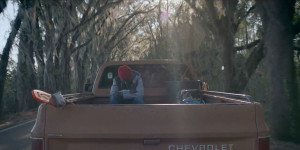 With radio coverage of the 2016 presidential race as a backdrop for Andrew and Regina’s day-to-day lives, there is the juxtaposition that something as big as who the next president could be, seems almost to be a non-entity. It takes a back seat to the situations being faced at home, work, and school. For Regina, life is about her children and providing for them, it is Life and Nothing More. 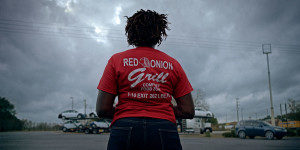 By casting “real people”, and not professional actors, there are moments when the dialogue seems unscripted, because it is so natural. Esparza has created a film that is almost more documentary than fiction. Life and Nothing More takes a personal and honest look into the life of a Black family living in America.