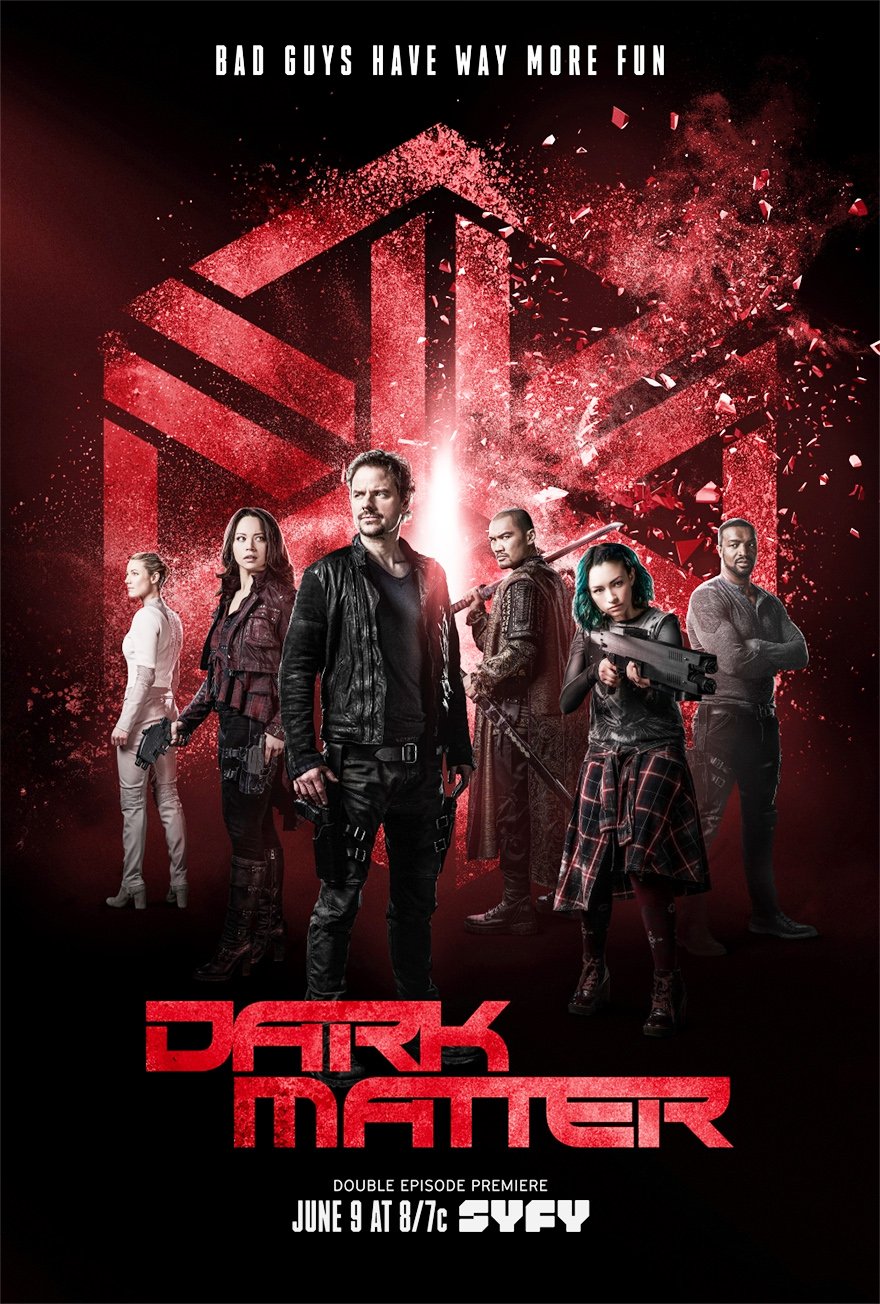 Dark Matter returned last night with two episodes back to back. And, while I’ll never forgive this show for killing off Nyx Harper, played by Malanie Liburd with gentle hopefulness armored in a precise physicality, I decided to return to the #RazaCrew fold as well.

The first hour of the season three premiere is largely a character piece. Even the short bursts of action seem strangely calm as we deal with the fallout from the literally explosive season two finale. Two and Six find each other and escape the station before it is decimated in the explosion that Ryo’s agent set.

A badly damaged Marauder serves as the perfect hiding place in the debris field with no engines and barely any life support, but for those same reasons, it doubles as a potential tomb. This gives Two and Six the opportunity to simultaneously wallow in self-recriminations while trying to ease the guilt of one another. It’s very sweet and very sad.

They both have pieces of Ryo’s puzzle. Six had that conversation with him where he insisted they use the blink drive to help him win Zairon’s war, then got ominous when Six asserted they would not give it to him. Two had that illuminating conversation with him on the space station. Neither wanted to believe that their friend, Four would kill an instillation full of innocent people or betray the crew, but as Two grimly states, he ceased being Four when he downloaded Ryo’s memories.

Even after these revelations, Two simply isn’t ready to hear when Android tells them that Ryo killed Nyx when he stole the blink drive. Of course, we know she was killed for way stupider reasons, but in Two’s mind, that’s just more blood on her hands and another crew member she failed.

Later Two conjures a version of Nyx from her oxygen-deprived mind who tells her it was right to try to do good even though they didn’t succeed. At no point is Two confused, thinking she’s somehow talking to Nyx. She knows these are just her subconscious thoughts taking the form of Nyx because she yearns to say goodbye to her. After she acknowledges this, we see why Nyx’s death is all the more devastating for Two when fantasy Nyx leans over and kisses her gently on the lips.

This episode is Melissa O’Neil’s finest work in the series. She’s done some terrific work in the past playing with everything from vulnerability to ruthless detachment, but this episode had me on the edge of my seat rooting for and mourning with her. There is such an organic way to her acting.

I’m glad Melanie Liburd got a proper send off even if it was a fantasy sequence. The chemistry between the two actresses on and off set was legend last season, and I’m glad they showed that Two was maybe falling love with her.

I’m not sure why Anders would go back to dig Three out of the rubble exactly, but I’m glad he did. Their scenes were enjoyable and provided some levity and action. I look forward to seeing what the show does with Anders. Will he be the Raza’s inside man on the GA side of things? I’m glad he survived and is a decent guy at heart, just like Cal …errr Six.

A funny thing I noticed while watching is that the actors, Anthony Lemke and Jeff Teravainen kind of favor each other, and they both look like gritty video game protagonists.

It’s good to see Five and Android working together again, and the brief firefight in the Raza’s corridors gives the episode a bit more action. I love that Five gravitates to giant energy weapons. Like, that’s just her thing now, get into it.

Truffault is a bit superfluous on the Raza bridge, but I like her as an ally to the crew, albeit a more ethically ambiguous one than Anders. The real reason she’s there is for that conversation with Two at the end of the episode, which has Two showing mild contempt for her opportunism while Truffault tries to impart some pragmatic wisdom of command.

I know Dark Matter isn’t dealing with a Star Trek level budget, but the space battle with no actual space battle got a bit stagnant after a while. Even the repairs were handled by nanobots off screen. I forgave it because I knew they needed an obstacle to keep Two and Six in their Box of Peril and Emotions. Here’s hoping they saved up their special effects coins for some spectacular CGI and set pieces later in the season.

Overall this was a very good episode. It’s a bit of a place holder, bringing the crew back together again. Everyone was given an adequate amount to do, which was satisfying. The next part of the 2-episode finale has a lot more action and business that will have an impact on the season’s arc.