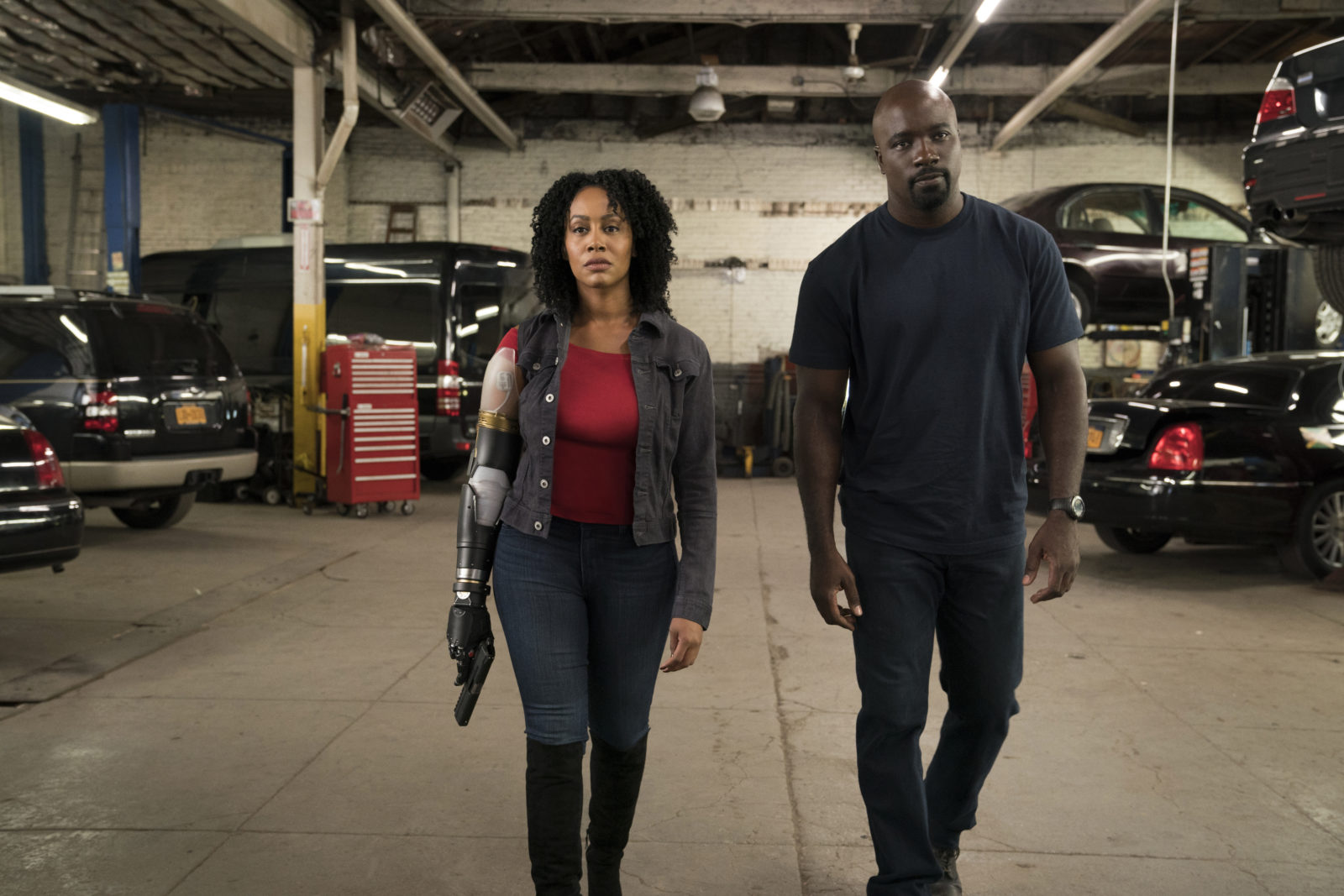 This has been a banner year for Black superheroes.  Starting from the January premiere of the CW series Black Lightning to the box office record-breaking film, Black Panther, 2018 continues to show us a new kind of superhero adapted from the comic book universe. This summer we get to revisit Harlem and explore the next series of adventures in store for Carl Lucas (Mike Colter), most notably known as Luke Cage. In the second season of Marvel’s Luke Cage — which gave the opportunity for women TV directors to get a shot at working on this series — Luke’s character is tested beyond measure. TV showrunner Cheo Hodari Coker who wrote several episodes illustrates a great deal of character development as Luke faces old enemies and new ones this season.

A sophomore season of a new show is a pendulum that could swing in either direction — you could either love it or hate it.  In the case of season 2 of Luke Cage, I would weigh in on the former and say that this season was far better and stronger than season 1. The chef’s finger kiss that made this season so incredible was how the story arc meanders and develops from one character to the next and builds a solid foundation that ties back to personal ulterior motives developed back in season 1.

I’ll keep this review as spoiler-free as possible because there are so many jaw-dropping revelations that occur in this series that any hint that is given in a review may compromise the element of surprise.  So let’s start with what we know.  In The Defenders, Misty Knight (Simone Missick) loses her arm while trying to save Claire Temple (Rosario Dawson). Claire still feels some level of guilt for Misty losing her arm. However, Misty doesn’t want her pity nor anyone else’s and wants to continue with her life business as usual.

Misty butts heads with Detective Nandi (Antonique Smith) who she keeps a perpetual side-eye on and for good reason. Sadly her own colleagues and superior treat her as if she’s a subpar detective due to her disability. This doesn’t stop Misty at all, and it is not until Misty has an eye-opening conversation with her gal pal Colleen Wing (Jessica Henwick) that it all becomes clear who she is and who she was meant to be.

There is a fight scene that ensues between both Misty and Colleen that gave me some SERIOUS Daughters of the Dragon vibes and I was grateful that we had a moment to get just a taste of these two women in action.  Both Jessica Henwick and Simone Missick have fantastic on-screen chemistry, so seeing these two have more screentime is exactly what more fans will be asking for. As for Luke Cage, well he’s definitely going through it. His relationship with Claire grows deeper and he’s a man who is definitely in love.  However, we know how long love in the Marvel universe lasts and things between these two get pretty complicated.

Luke not only has to contend with being the hero of Harlem, but he’s trying to make amends or at least make some attempt to build a rapport with his father James Lucas (Reg E. Cathey).  They’ve had a pretty tempestuous history and his father a reformed pastor of the church has to come to terms with his own sins of being an absentee dad. Life for Luke is further complicated when a new villain in town shows up, John McIver, but goes by the name “Bushmaster” (Mustafa Shakir). This Jamaican revolutionary has a score to settle with the Stokes and wants to take over Harlem and be its next King. His minions known as the Yardies — and also interchangeably the Stylers — do his evil bidding, slowly infiltrate and bring fear into the city.

Then we have our old foes Shades (Theo Rossi) and Mariah Dillard (Alfre Woodard) who are in full-fledged “Shady-Mariah” mode decide to cook up an insider trading deal on a plastics company. This season we get a lot of Shady Mariah and for the fans out there who love this couple — prepare to have your hearts broken, mended and broken all over again as these two go through their tumultuous ups and downs.

D.W. (Jeremiah Richard Craft) reprises his role as the DVD kid but takes on a more significant presence this season as he works in Pop’s Barbershop and sets up his merch in there. We discover in a scene between these two that Luke reads Ta-Nehisi Coates as we see a cameo of “Between The World and Me” in episode 1.

Another new player added to the cast is uptown deviant Dontrell “Cockroach” Hamilton (Dorian Missick) who is a thorn in Misty’s side.  Sadly he got off on a technicality from one of Scarfe’s (Frank Whaley) old cases and now he’s back to cause more trouble in Harlem. Cockroach is one of many buyers interested in purchasing guns from Mariah.

We also meet Mariah Dillard’s estranged daughter Tilda (Gabrielle Dennis). Tilda Johnson is a doctor who owns a holistic shop in Harlem. Tilda’s story arc also becomes quite compelling and comic book fans may already see where this is going since Tilda is also known as Nightshade — a known character whose first comic book appearance was in Captain America #164. Keep your eye on Tilda this season, I don’t think this is the last we will see of her.

There are a lot of highlights in this new season and I appreciate learning new Jamaican patwah like “raasclaat”. The patwah is quite heavy, so you may have to use closed captioning to understand some of the dialogue. There is also a fantastic showdown between Luke Cage and the Bushmaster on the high bridge with the classic Bob Marley jam “Sun Is Shining” meandering in the background.

Luke Cage covers some of the same issues it tackled in season 1 like sexual assault, which explores further the reasons for Mariah’s motives.  It also tackles issues like colorism and sexuality. A shocking development is revealed with a character’s sexuality who later has to make a life-changing decision.

This season is by far one of the most well-written and fully developed plot lines we’ve seen yet from a sophomore Marvel TV series. Sadly both sophomore seasons of Daredevil and Jessica Jones have been lackluster and didn’t quite capture the same intrigue and enthusiasm as their pilot seasons did. I should also mention that as much as I loathed Iron Fist, the 2-episode cameo we get with Danny Rand (Finn Jones) in this series are some of the strongest episodes.  The Power Man and Iron Fist duo dynamic is strong and palpable — whether you are anti-Danny Rand or not, there is no denying that these two share great chemistry on screen and have (dare I say) charisma. I still say just keep him away from Misty Knight.