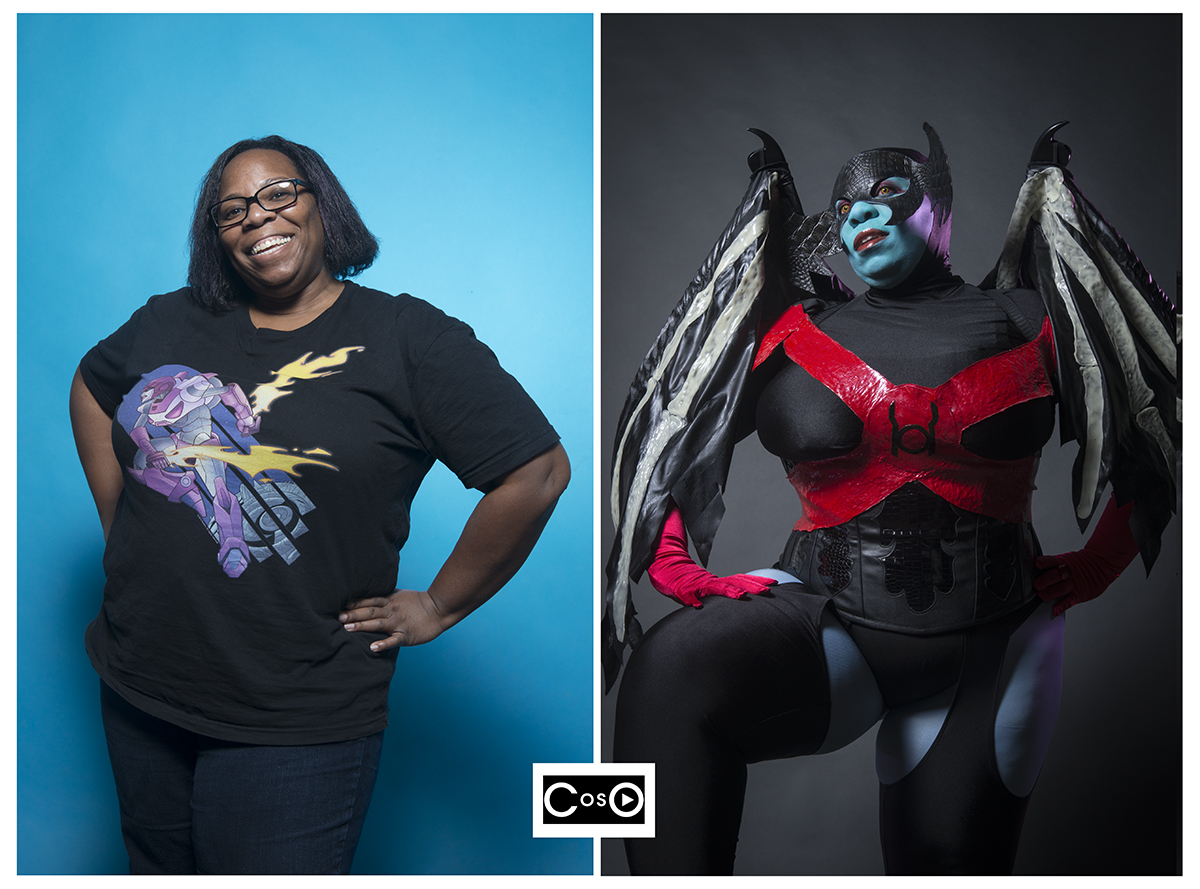 I never considered myself a geek until I picked up a new hobby, costume play, aka cosplay. It’s one of those things that happened organically: someone took me to a geek convention, I saw people in costume, and not once did it occur to me not to dress up like them. Before I’d been there an hour, I had plans, ideas, hopes, and dreams for how to become a part of this world.

In short, I love cosplay. It is one of the highlights of my life, providing an outlet for my creativity, my problem-solving, my mild exhibitionism, and my need for expression.

I often try to capture my joy of cosplay through photos of which I have many. And recently, when I did a cosplay photo shoot in my Asgardian Storm costume, I asked my significant other (S.O.) what he thought of one of my pictures. His response: “There’s a little too much boob.” A little too much boob.

I looked at him, angry and offended, and said, “This is my body. That’s just how it looks.”

“I just think it detracts from the costume,” he responded.

My S.O. loves my body. I know this. But for him to say my body in the suit was a problem was shaming. It was judgment. It was him expressing my body somehow was the problem in this costume that was designed with a top that is open-laced to the navel.

His comment brought back all the ways I’d experienced body criticism throughout my life. And it reminded me how, even in the cosplay community that has allowed me to be so free, I am still not immune from body shaming.

Growing up, I was taught to be ashamed of my size and my breasts. I remember being in grade school, and my teacher loudly whispering during attendance that I needed a bra. Then followed my classmates talking behind my back when the molded-cup bra my mom bought me at the time made me look even more developed than I was. I remember being teased for how much my breasts bounced when I ran during gym class; I wore two bras to compensate and still faced comments like “you’re going to give yourself a black eye” or “try not to get a concussion.”

My clothing was monitored and criticized by both men and women. I was told to look available, but not too available; approachable but not too comfortable because comfortable meant I wasn’t trying hard enough. I needed to show my body but not my skin; skin invited trouble.

I was shamed and policed for more than just the shape of my body. Because I am brown, I was told to stay indoors and avoid the sun because heaven forbid I get darker. I was told most sports weren’t feminine and the ones on the approved list were subject to rules that moderated and tempered girls’ aggression. I was taught my bigger, browner body scared white women and that it was my responsibility to manage my effect on them.

I hated this. I still hate it. I’d been groomed all my life to seek this body-related attention as an affirmation of my womanly worth — despite its apparent simultaneous lack of appeal.

Cosplay is ostensibly a community that accepts those (like me) who exist outside mainstream normative ideals. But in this community, I’ve simply found another arena where I need to manage body commodification and shaming — in ways I didn’t anticipate.

As a cosplayer, your audience and the people who enjoy cosplay don’t always see you as a person. They often see you as the embodiment of the fictional character you’re portraying, and sometimes they impose their standards, their desires, and their interpretation of that character onto you. The cosplay stops being about you and instead becomes about you fitting into someone else’s narrative about a character.

But I often don’t fit that narrative. I don’t (can’t or won’t) physically resemble the character enough to satisfy a fan’s embodiment of a beloved character, and so I’m often rendered invisible.

This wasn’t true when I first started. There were so few people dressing up that people were excited to see anyone adorned as their favorite character. As cosplay got more popular, however, there was an increased number of people who looked like the characters — or who were willing to change their bodies enough to get as close to looking like the characters as humanly possible.

And suddenly, that became the ideal.

Because I am a fat, black woman, I have worn costumes which are 95% accurate to the screen or comic book version of the character I’m portraying, but I’ve been dismissed and ridiculed. When I dressed as Cable, an X-Men character, people couldn’t tell who I was because I was brown and (apparently) a woman. Because people associate brown skin and white hair with Storm, people kept asking if that’s who I was; never mind my silver arm, bright eye, and extraneous yellow pouches, all characteristics of classic Cable.

At the same time, I’ve seen people who are slim or muscular (or whatever the current illusion of attractive is) wear a scaled-back version of the costume and be adored. They look “right” even if they aren’t trying to be “right.”

Since people like me don’t exist in comics, I can get a little closer if the character is masculine or an inhuman skin color. I recognize this is both funny and fucked up, but my cosplay can become more realistic for people the further I step away from my identity.

This isn’t to say marginalized people are never accepted in the cosplay world, but even this acceptance isn’t what it should be. Just like the broader body positivity movement endorses certain bodies over others — the hourglass curvy, not the round curvy; the white bodies, not the brown ones; the cellulite-free bodies, not the ones with visible cellulite —true acceptance is modified.

When you look up black women cosplayers or think about those you know, they are usually light-skinned and not fat. If they are darker skinned, they are thin and curvy. If they are fat, they are lighter skinned. I very rarely see dark-skinned, fat women cosplayers, and while I cannot say why that is, I can guess: even in this community which built itself on accepting the socially unaccepted, remains misfit toys.

It’s also worth noting the cosplay community is hardly immune from the objectification of female bodies. I’ve experienced what it’s like to have men try to make me responsible for their sexual desire, where I’ve been accused of teasing them and enticing them because of what I chose to wear. I know what it feels like to have strangers project their sexual fantasies onto me, to have them overwrite my humanity with their lust as they try to shape me into that fantasy. I’ve had them turn our interactions into the verbal equivalent of those fantasies until they are not talking with me anymore and I’m just a placeholder for future jack-off material.

I’ve always been aware there are approved looks — socially accepted beauty. And I’ve always known I do not represent this. My brown skin alone rules me out of acceptability, but my broad nose, my full lips, my dark brown eyes, my fat body… these things together firmly place me into the unapproved category. I see how some people are treated in the cosplay community, and as inclusive as it is, not everyone is visible. Girls like me are not visible.

Cosplay culture mimics societal “norms” in virtually every way, including body shaming and celebrating individual body types. And just like in “mainstream” culture, there are people who exist outside the accepted norm and who push back — and are still marginalized. Those of us who keep doing what we’re doing, who keep occupying space in this hobby that actively tries to ignore us are pushing back. Every race, body or gender nonconforming person who refuses to step aside is pushing back. Every person who has been told that they don’t fit but they stay anyway is pushing back. We are making spaces for ourselves, and when doors are shut in our faces, we cut another hole in the wall to make a new one.

Our bodies don’t need to be tamed. They can be loved, cherished, and appreciated regardless of how they look or what they are capable of doing… including when they’re dressed in a cosplay costume.

TaLynn Kel is a writer and an avid participant in the Atlanta cosplay scene. You will find her at various Atlanta conventions in costume and participating on panels about cosplay. She is also a guest writer for Black Girl Nerds, The Establishment, The Anime Complexium, and Huffington Post. You can follow her on her site, Breaking Normal, or on Facebook, Twitter, Instagram, YouTube, and Tumblr.