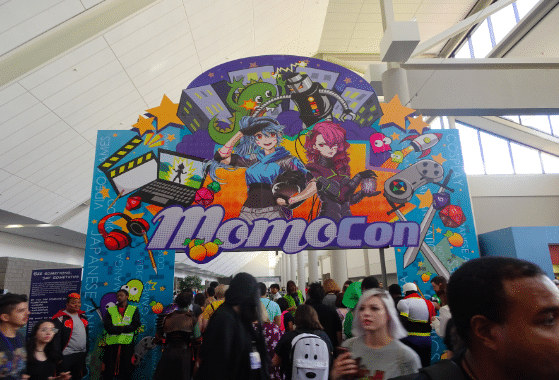 This past weekend, I attended my first Momocon convention.

Momocon is an animation, anime, gaming and comic book convention that was held at the World Congress Center in Downtown Atlanta, Georgia. It is one of the largest growing conventions for people of all ages in the United States.  Momocon was jam-packed with 4-days of celebrity panels, gaming, cosplay and much more. Here’s a run-down of my cosplaying weekend experience!

I took a personal day so that I would be able to fully emerge myself into the Momocon culture. My friends and family couldn’t attend on Thursday, so I journeyed to the convention alone. I wore a Kingdom Hearts T-shirt accompanied with a Halloween Town Keyblade. As soon as I reached the convention hall I was thrilled to see hundreds of people dressed up in various cosplays. I saw everything from Marvel, DC, manga and some gaming fandoms. Needless to say, this blerd was in heaven! 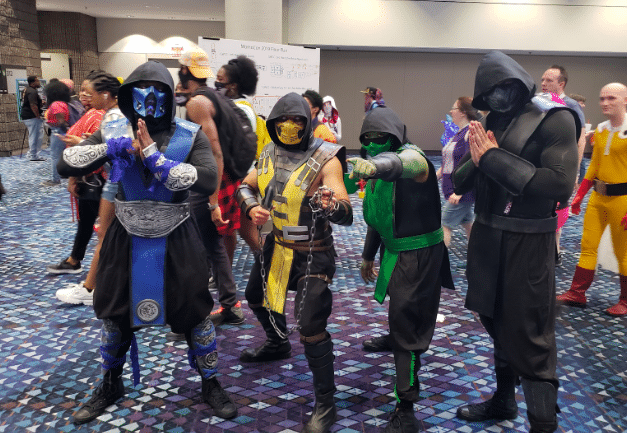 As I made my way to will call to pick up my badge, (which gave me full access to various halls and rooms) I was greeted by big smiles and compliments. It felt amazing to be able to wear one of my favorite gaming paraphernalia without being judged or feeling insecure. Momocon was a place where Blerds could come together, be ourselves, all while making new friends.

I attended two panels on Thursday,  “Cosplay Made Simple” and “Inclusive Storytelling.”  “Cosplay Made Simple” gave the breakdown on how to do exceptional cosplay without breaking the bank. It was comprised of four veteran cosplayers— Barr Foxx, Baroness, Walter, and Royalty Cosplay, who all made their fandoms proud with their elaborate outfits, all while staying on budget.

“Inclusive Storytelling,” was the panel I was most anticipating. It revolved around the importance of inclusivity of women, people of color, the physically disabled and the LGBTQ community in gaming culture. The diversity of gaming is slowly evolving, but dynamic Black characters and diversity are still hard to come by. According to gaming convention organizer Avonelle Wing, “The industry has an even bigger problem with race than it does with gender.”  Other factors such as financial barriers, a lack of proper training as well as fewer opportunities for Black video game programmers is concerning. The gaming industry still has some work to do, when it comes to bridging these gaps.

Day two at Momocon I was able to meet up with my best friend. I cosplayed as Monkey D. Luffy the anime protagonist from One Piece and my best friend cosplayed as a member of The Scouting Legion from the anime Attack on Titan. It was an enormous crowd compared to that of Thursday, with even more mind-blowing panels. We were able to check out a lot of the vendors, virtual reality games as well as play some classic arcade games.

At Exhibit Hall, which is the main floor of the convention center, there was a sea of cosplayers, vendors, gaming stages and virtual reality stations as far as the eye could see. It was slightly overwhelming at first glance, but we caught our breath and dived right in. Our first stop was to the gaming arena. They had an arrangement of consoles from Playstations, Switches, classic arcade games and large modules you could step into. On various stages throughout, were live Smash Brother tournaments, Soul Calibur and Just Dance battles. 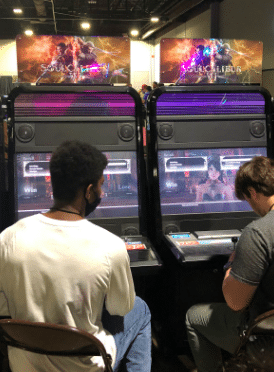 There were gaming tournaments scheduled every day of Momocon. The rules were, first come first serve as well as to bring your own controller and headset. There was even an option for overnight storage if participants brought various monitors, keyboards, etc. Smash Ultimate was the only free entry tournament that was on the docket during the matches.

After challenging a few gamers for hours, we made our way to the panel, “Blerds in Martial Arts” where we learned about various Black martial artists who opened up their own martial art studios. Each artist shared the impact that Black characters had on their experience growing up. Martial artists like Jim Kelly, who rose to fame in the early 1970s and was best known for his major role in Enter The Dragon. Momocon had very diverse panels as well as showcases for people of all ages.

Another day, another cosplay. Saturday I cosplayed as female Todoroki from My Hero Academia. This time my cousin and a few more Blerds were able to join in on the festivities. We made our rounds around the main floor focusing on the vendors’ section. Artist from all over the U.S. blessed us with their amazing artwork, posters, figurines and much more.

We stopped often to take pictures with some of our favorite characters and I even managed to speak to some dope Black Cosplayers. Here are a few of my favorites faces from Saturday!

This particular Sunday fun day was filled with shopping and appreciation. As Momocon came to an end, I realized that I hadn’t shopped around. While I did bask in all the greatness the vendors had to offer, I hadn’t really stopped to take it all in. There was a plethora of T-shirts, comics, and anime knick-knacks that were wanting a home. A writer, artist, and publisher by the name of James Mason grabbed my attention with his vibrant comics stand. 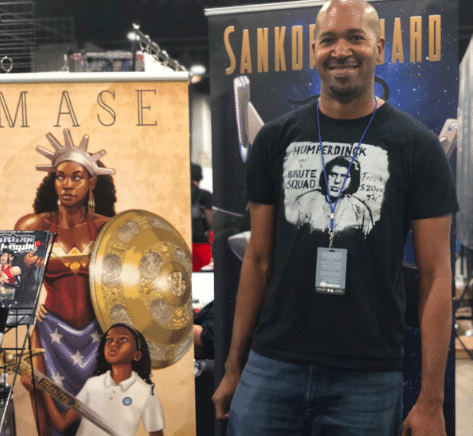 He is the vision behind Urban Shogun Comics, based in Atlanta, Georgia. His latest pieces have been afro-futuristic, not to mention very pro-Black!

Momocon was a haven of inclusivity, housing thousands of blerds from across the nation. For four amazing days, various fandoms could come together and submerge themselves in all things nerdy. With laughter and positive energy overflowing from each hall, Momocon was a force to be reckoned with in the beautiful city of Atlanta. Free from judgment and free from ridicule; I came, I saw, I nerded out!