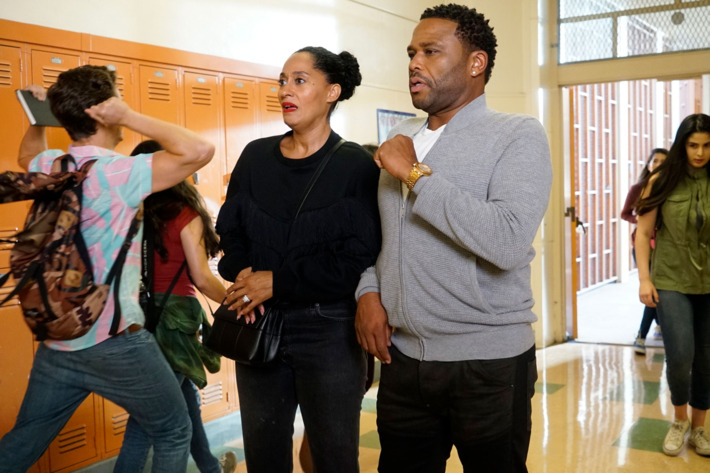 In this week’s episode of black-ish, Junior learned that it’s what’s on the inside that counts rather than what we wear on the outside. Deep right?

The episode begins with Junior walking into the dining room with a dejected look on his face. When Diane asks why he looks like a rough day personified, Junior announces that he got expelled from school. And why was he, you ask with a gasp? Because he punched another student, knocking him clean out… Yes you read that right. Junior, our awkward, adorkable, cloak-wearing Junior punched someone. And like Dre and Pops (and Diane), I smiled. Sure, that reaction, as Bow states, is inappropriate, but come on, you probably smirked just a little.

To find out what lead to this moment, we have to go back two days. Recently, Junior bought his very first manly gold chain, with money he saved up from working different odd jobs. As Dre puts it there is always one article of clothing that defines every man as “that dude,” and for Junior, it was his precious gold chain. Through this chain, Junior not only found swagger but he also finally had his father’s love, his real love. You know, the one that comes with respect and hugs. (LOL Dre is ridiculous.) Sadly and dramatically, Junior found that his chain was stolen from his school locker.

When Dre learns of this series of unfortunate events (wink), he too becomes filled with despair and exclaims in the most dramatic of ways that Junior is “just some light-skinned weirdo kid in a turtleneck” (I can’t with this fool). Junior agrees and says that he “should tan,” pause… Boy, what are you talking about — you’d just be a tanned weirdo in a turtleneck, un-pause. Pops asks Junior if he knows who stole the chain, and Junior suspects a kid named Reggie.

The family debates whether Junior might be better off at a public school, and in typical black-ish fashion we’re given a timely lesson on the history of the American public school system and its treatment of Black students. From the time slavery ended in 1865 and well into the sixties, public schools were segregated. It wasn’t until 1954 when Thurgood Marshall argued on behalf of the NAACP in the landmark case of Brown v. Board of Education of Topeka before the Supreme Court and won on the grounds that segregation was found to be unconstitutional. Despite a ruling to integrate with “all deliberate speed,” it wasn’t until 1965 that all schools were forced to integrate or they wouldn’t receive federal funding as stipulated in Title IV. As more schools became integrated test scores rose, BUT a 2014 study found that American Public schools are less segregated now than in the 60s, the time before the Civil Rights Movement, ain’t that something. SMH.

After being ill-advised by coworkers and nosy neighbors (looking at you Janine), Bow and Dre begin to freak out that Junior will be eaten alive at public school. Luckily, Zoe has decided she’ll be his personal “how to survive high school” trainer. On the first day of school Dre and Bow — despite their feelings of trepidation — leave Junior to be swallowed up by his fellow teen peers.

Despite his apprehension of becoming overwhelmed and losing himself in a new environment, Junior learns that he actually feels comfortable in this new environment. Not only were there more Black teens than he’s ever been around, there were nerdy Black teens! Junior learned that his true gold chain, his confidence, is on the inside and that is what matters more. Bow and Dre realize they have their own preconceived notions about public schools that caused them to be closed minded to Junior attending. Seeing how happy he is, they decide to make a concerted effort to be better and fully support his decision to stay.

As a Black Girl Nerd, I know how much it means to be appreciated by those who get just as excited talking about Star Trek and The Lion King just as much as I do. Junior finally finding other teens who enjoy his idiosyncrasies, fills my geek heart with joy because there is nothing better than knowing you belong.