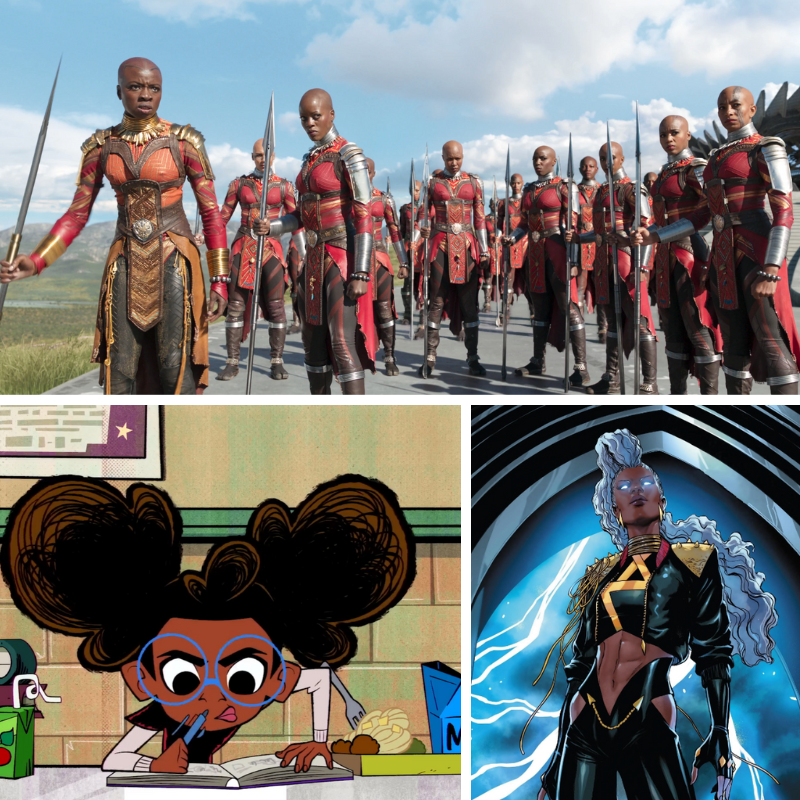 Spoiler Alert: The below essay has spoilers for Black Panther: Wakanda Forever.

A see-through plane, gold bracelets, and a lasso of truth were the stuff of my dreams as a little Black girl on a small island in Florida. I imagined myself flying that plane as I ran around my grandparents’ living room looking for crime to fight. I pretended to be Diana Prince, aka Wonder Woman, as I lassoed imaginary criminals to find out the depths of their evil plans. I wanted to be her; however, there was always an underlying knowledge that becoming her would always be beyond my reach.

It wasn’t the fact that she was a fictional character with superhuman abilities and magical tools that fueled the doubt. No, that little nugget of disbelief was buried deeper than that. It was nestled just beneath the acknowledgment that I didn’t have the same physical attributes that she did. It was attached to the perceived limits placed on me by the world around me — limits I was subconsciously aware of because of comments from teachers with white skin or slights from auburn-haired classmates or even jests that came from my own people. I was different from Wonder Woman in ways that were impactful to me, despite the pervasiveness of behaving as if inclusion does not matter.

Everything changed when I saw Ororo Munroe, better known as Storm. I didn’t just want to be her; I actually felt I could be her. What was the difference? There was no way I could be a white woman with bone-straight black hair and blue eyes from an island of supernaturally strong women warriors — not in the mid-to-late 1980s anyway. But a Black woman hailing from Africa with the power to control the weather? Just maybe. Why? Yup, you guessed it. Representation. I could see my reflection in her, and I thought she was the baddest thing walking, even more powerful than my revered Wonder Woman. I didn’t know it then, but that would begin for me a journey of understanding that seeing yourself in others has a very real impact on where you dare to see yourself.

Many people began to understand that impact after the release of the first Black Panther movie, especially those with the influence and affluence to affect what types of films come to the big screen. Little Black boys everywhere wanted to be T’Challa, even the ones inside of adult bodies. They wore his costume for Halloween, had Black Panther-themed birthday parties, and caused many parents foot injuries from stepping on their T’Challa action figures. Not just because he was one of the many superheroes on the roster but because he was their superhero.

However, that movement has suffered a grave loss. Many of us were hurt by the passing of Chadwick Boseman, and we worried about what would happen to a film franchise that had become a lighthearted beacon of togetherness for our community. Thankfully, the torch has been passed to Shuri (Letitia Wright). We glimpsed her brilliance in the first film. We learned that she was the brains behind the technology of T’Challa’s suit. In the return of the franchise, she steps into the role of Black Panther and showcases not only her brilliance but her ability to fight and lead others as well. Disney could have chosen to take the franchise in another direction, but it chose to center Black women, and I’m excited about that.

We’ve not had a major Black female superhero since the introduction of Storm. Now, not only will a new generation of girls have Shuri’s brains and ingenuity to aspire to, but also they’ll have Ironheart.

If you’re not a follower of comic book lore, you may not know who that is. Iron Man has passed away in the MCU; however, his legacy lives on. A young engineer by the name of Riri Williams, endorsed by Tony Stark himself, will don her own iron suit, and she and Shuri become fast friends. She’s being introduced to the franchise in this film, as she will soon have her own series on Disney+.

Two Black female super-geniuses in one film … I swoon. Add to that, Disney+ is also set next year to premiere Moon Girl and Devil Dinosaur, an animated series with a 13-year-old genius named Lunella Lafayette who wrangles a pet dinosaur.

Black women are no longer in the shadows or existing primarily as sidekicks in the imaginary world of superheroes. And while that may seem silly to many, the grand world of imagination has a very tangible impact on the real world. Many more girls will now become interested in not only comics but also technology, science, and other fields that may have been unimaginable because of surroundings or circumstance.

I was that nerdy girl who sat in a dark room for hours writing code on my Commodore 64. I was into cartoons, video games, and books. But I didn’t see that represented anywhere else. I was the epitome of a Black girl nerd, and I didn’t see anything cool about that at the time. Now, I know better. While my nieces and goddaughters have me to look up to in more conventional ways, I’m glad they, and scores of other little girls, have Shuri, Riri, and Lunella as otherworldly examples of their power. It makes my heart smile that they have not one but three of their very own Ororo Munroes to unleash their imaginations without subtle limitations — three very good examples of why it is cool to be a Black girl nerd.