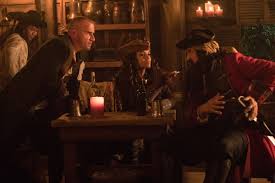 This week, the Legends of Tomorrow fight pirates and Damien Darhk while Sara finally goes on a date with Ava from the Time bureau. But, the best side story is Rip and Wally’s broken-hearted bros night on the town. The other stories are important, sure, but Wally and Rip get drunk and have a crazy time worth discussing.

Let’s dive into the episode.

The Legends team, sans Sara, work to figure out why Mallus was scared of Zari’s totem and why he also said that there was a sixth one. They figure out that where the others are, noting that the Earth totem is still lost. It may lead them to the sixth, so they got to where it was last seen, with Blackbeard in the 1770s. Everyone dons a pirate suit and they are off. Meanwhile, Sara finally goes out with Ava from the Time Bureau. They are dressed up and sitting down in a swanky place with low lights and a romantic setting. However, neither of them is looking comfortable.

Our pals Wally (rocking a weird ass mini bun on his head) and Rip are still in small talk mode. Rip tells Wally that he followed the notes of the George Michael hit “Careless Whisper” that he’s had on repeat on his iPod since leaving Star City. Wally is heartbroken and so is Rip it turns out. Wally has already said he was joining up with anybody, so that’s off the table. They leave to just have a little fun. After all, both of them need it.

Soon, they are pantsing Ned and robbing him of his time courier wristwatch gadget before the man knows what happened. Wally also lifts Rip’s signature trench coat from the Time Bureau closet. They are soon drinking, well Rip is. Wally confides that he can only get drunk off the rocket fuel Cisco gave him. No, that’s not the name. The stuff is literal rocket fuel. Soon both guys are blasted and where is the next natural place for two drunk and broken hearts to go? To a smoky bar for bad karaoke, of course. Good luck finding THAT in 2018. They end up in Tokyo in 1992, on a stage with the opening bars of “Careless Whisper” cueing up.

The Legends get the totem and end up getting their asses handed to them by Darhk, who is soon firing canons at the WaveRider! He has evil Nora by his side and together they lift Amaya’s totem. The Legends already had the emerald Earth totem. Don’t blink because the next minute there are pirates busting up the Waverider and fighting half the team. Zari and Ray are on the ground.

The date is NOT going well. It’s awkward. Sara spots Ned and fakes a bathroom break to leave. Ned and Ava are left wondering where she went.

Meanwhile, our bros are pouring their hearts out onstage, Rip mourning all his bad decisions and friendships losses, Wally his lost love. They end up back at the monastery, where we learn that Wally has hangovers that only last three minutes and he has been cured of his melancholy. Rip gives him the sales pitch. I think we have a new Legend.

Good thing, too. Ray goes back to help Nora, feeling sorry that their fighting left her dying. Little girl Nora really got to him. He helps her, she thanks him by sucking his life force. Damien tells her to stop because he saved her life. They aren’t going to leave him though. Seems Ray is now their hostage.

Ava and Sara decide that they are NOT the types of regular dating. They end up “exploring a room” somewhere on the ship. Amaya and Nate get at it too. I am telling y’all, I think Nate is Vixen’s granddaddy. We’ll see.

The wacky exploration of loss in this episode was a great way to transition Wally into the team and Rip back as well. Both are coming from some bad breaks, but they are sincere about moving forward. I am just not so sure that the team will be as accepting of Rip as they will be of Wally.