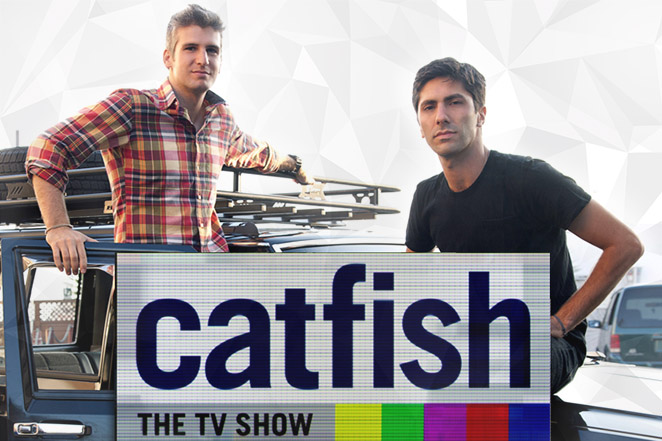 On November 12, 2012, two men embarked on a journey to connect people who desired to meet the people they had been interacting with online. One of the men was clearly skeptical about these online relationships. The other, while being discouraged due to his own fake online relationship, was hopeful love could be found. And so Catfish: The TV Show began. For six seasons and five years, the word “catfish” infiltrated our homes and vocabulary, the show itself becoming a hit for MTV in its earlier seasons. Nev and Max acted as modern-day Hardy Boys, but instead of mystery and intrigue they tackled fake profiles and broken webcams. The dynamic duo has heard and seen wild stories throughout the years. And to celebrate the show’s five-year success, lets take a look back at the top 5 episodes of Catfish.

Jasmine is a mother of a 9-month-old child, who is talking online with Mike. They’ve spoken on the phone twice, even though they’ve been chatting for two years. Mike’s “occupation” keeps him constantly on the move. However, it turns out on the move really means non-existent, because Mike is really Mhissy, an acquaintance of Jasmine.

In the grand scheme of Catfish episodes, this one has a pretty basic reveal. However, you can’t forget how Mhissy enters in her red sweater dress throwing a rose at Jasmine. This episode is the first time I remember thinking the cafisher and the catfishee may actually get into a fist fight. The best part of this episode is how overwhelmed Nev looks trying to break up Mhissy and Jasmine, to the amusement of the viewers.

Colleen is a 20 year old who met Tony on Plenty of Fish, which should let you know how this story is going to end. Colleen and Tony have been talking for three months and got engaged after 1 month. In photos, Tony is a rugged 27-year-old white man, a la Ryan Gosling. In real life, Tony is actually Jeremy and he’s an awkward Black man.

This episode begins with twists since Colleen, like her fiancé, has a lying problem. What really sells this episode is the stereotypical “Black woman don’t like dating me because I’m different” role Tony/Jeremy plays. If you’re a woman who’s a part of a Blerd community, this episode will speak to you especially. Tony/Jeremy believes that because he likes golf and sci-fi, Black women aren’t interested, so he’s more comfortable talking to white woman posing as a white man. Black women may not be interested in Tony/Jeremy because he’s an entitled liar, but I’m no expert.

Lucille had a big brother/little sister relationship with Kidd Cole, a producer claiming to be the youngest person signed to GOOD Music. She helped Miguel, Cole’s manager, book hotels, venues, and security. Of course this is all a scam because this show specializes in scammers. Kidd Cole isn’t signed to GOOD Music and has been scamming more people around the DC area.

The highlight of the episode was easily the way Nev lost his cool and threw Cole’s phone over the bridge. Initially, a true believer of online love, Nev has become pessimistic over the seasons and this was the first time he showed his frustrations. Above all, nothing beats watching a scammer staying true to the lie.

Keyonnah was a “part-time model” who was pretty certain she was in an online relationship with Bow Wow. Yes, you’re reading this correctly: Like Mike, Roll Bounce, former So So Def rapper Bow Wow. She even claimed to have received $10,000 from him. Of course, this was not the case and Keyonnah got to meet the infamous Dee Pimpin, an aspiring rapper who was most certainly not Bow Wow.

There’s greatness in this episode just from the notion that Bow Wow got roped into this storyline — without his knowledge. Dee Pimpin as a catfisher is one of the more memorable ones, especially when she explains how she “tricks” straight women into believing she’s a man (hint: sex toys are involved). The ridiculousness of this faux celebrity relationship made for great television.

Antwane was in a phone relationship with Tony for three years. Because he was very slow to adapt to technology, he never saw Tony’s face, only speaking on the phone with him. His cousin, Carmen, came along for the ride, only to turn on the Catfish team and reveal that she was in fact Tony.

Pack it up and go home because there is no competition. From the super colorful Antwane being a source of entertainment throughout the episode, to Carmen dropping her voice to an unrecognizable baritone  after revealing herself, this episode took the grand prize. And who can forget the iconic reasoning why Carmen tormented her cousin all these years: he shouldn’t of called her a “Fat Ass Kelly Price.” For these reasons, this episode will always be up for discussion as the best Catfish episode of all time.