While at San Diego Comic-Con, I had the pleasure to chat with Sarah Chalke and Spencer Grammer, who voice Beth and Summer on the critically-acclaimed Adult Swim show, Rick and Morty. 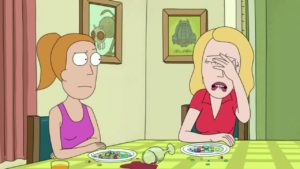 Kayla: What has it been like watching the fandom grow in between seasons?

Sarah: I feel like it’s cool to be apart of something you’re so excited about and extremely proud of. We get the scripts and we are so psyched! And so I feel like we’re equally fans of the show and I’m such a nerd for animation. I can’t believe the art on the show for season 3, it’s amazing….Yes there’s all this sci-fi, intergalactic adventures but I feel like its grounded in this dysfunctional family, who are dealing with real, funny, heartbreaking issues.

Spencer: And I think the relationships are very specific. There’s a brother/sister, mother/father, grandfather/granddaughter dynamic that we can all relate to, even in the realm of all the craziness that happens to them in the show. I meet people all the time and they are just so overjoyed that I’m a part of the show. I feel like I’m really privileged to be a part of the show and they gave me the opportunity to create this character. She stands up for herself and she became her own voice.

Kayla: Do you have a favorite episode for each of your characters?

Sarah: Mine was the one where Beth and Jerry go off planet for couples counseling.

Spencer: I love that episode! When I read the script for that episode, and I’m not in that one much, but I remember thinking this episode is going to be so fucking good!

I love the episode with Jerry and Meeseeks. We also have a Mad Max-esque episode coming up, it’s really fun. Rick and Morty get into another crazy mess….This is why it took so long. They wanted to make sure they delivered something to you that you would love.

5 Things You Can Love About Marvel’s ‘Inhumans’