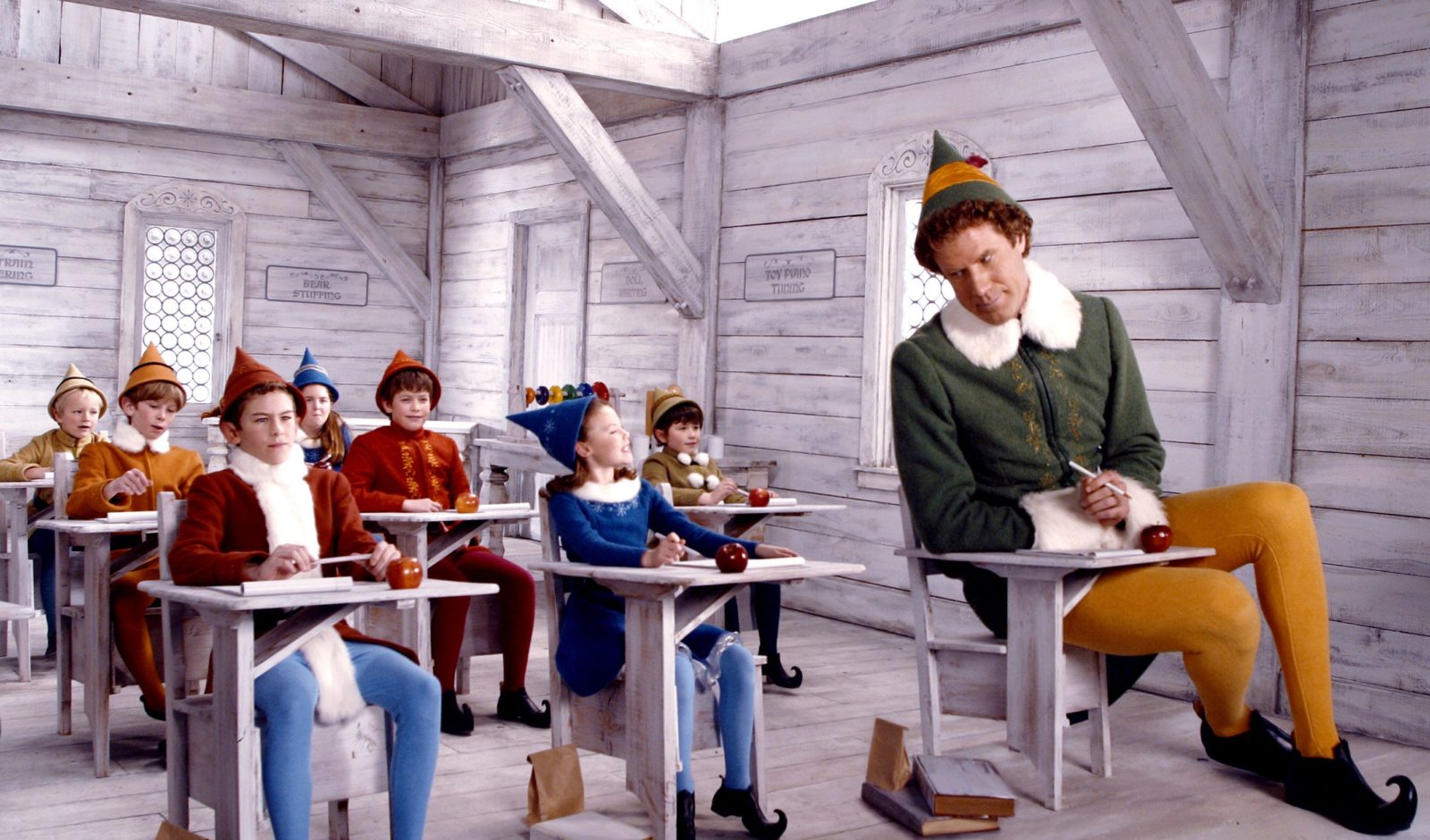 In the early 2000s, David Berenbaum set out to fulfill his dream of writing a Christmas movie. By 2003, he accomplished that with his first screenplay. It’s hard to believe that the film got so much pushback from New Line about the tone, the casting, and just about every other aspect. Eighteen years later, it’s one of the most beloved Christmas movies of all time.

Buddy (Will Ferrell) is the only human in the North Pole, but he doesn’t know it. He’s lived and worked among the elves with Santa Claus (Edward Asner) all his life. Although he realizes that he’s different in size and his toy making skills are noticeably less than, it never occurs to him that he might be an actual human. When Papa Elf (Bob Newhart) finally reveals his true origins, Buddy travels to New York City to find his biological father. Hilarity ensues.

Some of the most memorable scenes are of Buddy discovering everything the Big Apple has to offer. I’ve watched Elf at least three times a year since 2003, and Buddy waving to a man hailing a cab never fails to make me laugh. A lot of Elf’s appeal is the innocence and childlike wonder that Buddy radiates. His immediate love for Emily (Mary Steenburgen) and Michael (Daniel Tay) is so wholesome, and the fact that he fully expects to live with them forever is equally amusing and sweet.

Elf employs a few tropes. It’s a fish out of water scenario with Buddy walking around NYC amazed by everything. It’s also a quirky romantic comedy with a (somewhat) Manic Pixie Dream Boy showing a jaded girl how to be a kid again. However, it’s the classic setup that the Hallmark Channel has built their empire of holiday movies on that takes center stage — people who are too busy with work to have Christmas spirit.

The concept may seem a bit silly now, but there are plenty of Scrooges in the real world who hate the holiday. James Caan nails the role as Walter Hobbs, Buddy’s cynical father who only cares about his work as a children’s book publisher. He’s a special type of jerk, one who takes books away from children — at Christmas, no less — because of a client’s missed payment. It’s this selfishness that gets Walter on Santa’s Naughty List.

Alongside newer actors, Elf boasts quite a few Hollywood legends, with Asner, Newhart, and Caan. It also stars actors who’d become increasingly famous since, like Peter Dinklage, Andy Richter, Amy Sedaris, and Faizon Love. At the time, many of the film’s big names were relatively new to the industry. This was one of Jon Favreau’s first directed features, five years before he kicked off the MCU with Iron Man. Zooey Deschanel wasn’t quite well-known yet either.

Old School came out right before Elf, making the studio question whether or not people wanted to see Will Ferrell in a children’s movie. He was known for Saturday Night Live and his raunchy comedic roles. Could he lead a family-friendly holiday feature? Jim Carrey was the first choice for Buddy, but he passed on the role. I mean, he had just played the Grinch three years prior. I’m not sure why he would also have wanted to become an elf.

And truly, I can’t imagine anyone else as Buddy. Ferrell may have a reputation as a comedian who pushes the envelope, but he’s hilarious and endearing as the innocent and inherently spirited Buddy the Elf.

The filmmakers drew inspiration from Berenbaum’s favorite childhood classic, 1964’s Rudolph the Red-Nosed Reindeer. From the costumes to the stop-motion North Pole creatures, Elf pays homage to the Rankin/Bass production. Similar to Rudolph, Buddy is an outcast among his peers. Thankfully, he doesn’t experience the bullying that the reindeer endured. Buddy’s green and yellow costume is also styled after Hermey, an elf who longs to be a dentist.

When we love something, we usually want more of it; however, Elf feels complete on its own. One of the greatest things about the film is that there isn’t a sequel. We have Will Ferrell to thank for that. He would’ve banked $29 million to reprise the role, but he turned it down. He told The Hollywood Reporter, “I would have had to promote the movie from an honest place, which would’ve been, like, ‘Oh no, it’s not good. I just couldn’t turn down that much money.’ And I thought, ‘Can I actually say those words? I don’t think I can, so I guess I can’t do the movie.’”

Elf is a timeless film that encompasses everything we love about the holidays. It’s enjoyable for both children and adults since it was made by nostalgic adults. It’s a film we’ll be quoting for years to come. How many people have answered the phone: “Buddy the Elf, what’s your favorite color?” My guess is more people than would like to admit it.

Elf is available to stream on HBO Max and Starz.