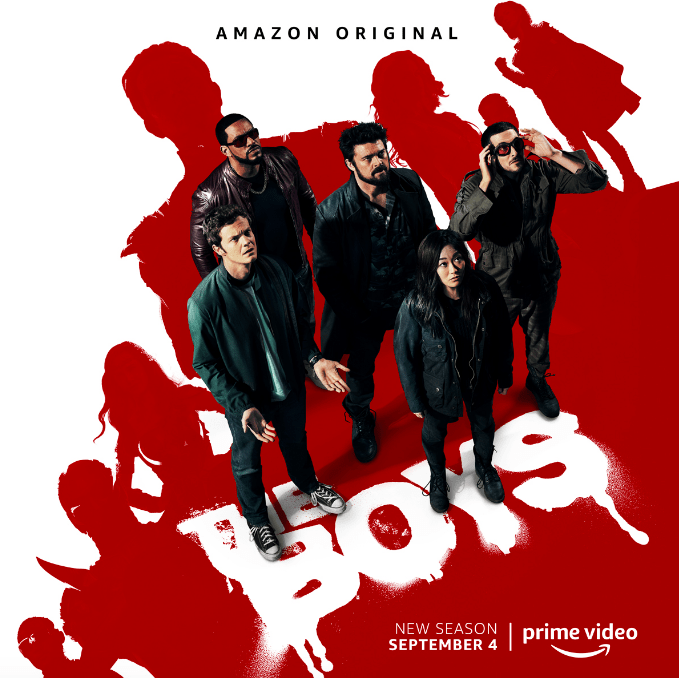 Comic-Con@Home gave us the panels we love, and it’s just getting started. Today BGN was happy to join the panel for Amazon Prime’s The Boys. A complete success in season 1, The Boys is back with a season 2 that has even more wtf?! moments to enjoy. The exclusive clips and trailers alone had us pining for more.

The Boys Comic-Con@Home panel included creator/executive producer Erik Kripke, along with series stars Karl Urban (Butcher), Jack Quaid (Hughie), Antony Starr (Homelander), Erin Moriarty (Annie/Starlight), Jessie T. Usher (A-Train), Laz Alonso (Mother’s Milk), Chace Crawford (The Deep), Tomer Capon (Frenchie), Karen Fukuhara (The Female), and newcomer Aya Cash (Stormfront). The panel was moderated by the amazing talent and black girl nerd in her own right, Aisha Tyler. During the panel, we were given some behind the scenes looks into the upcoming season of The Boys.

If you haven’t started watching The Boys on Prime yet, do yourself a favor and watch tonight. Brief history: the show is based on the New York Times best-selling comic by Garth Ennis and Darick Robertson. It’s a fun and irreverent take on what happens when superheroes — who are as popular as celebrities — abuse their superpowers rather than use them for good. Season 2 kicks off with The Boys as wanted fugitives, hunted by the Supes, and desperately trying to regroup and fight back against Vought. Season 2 is supposed to be even crazier, but also more emotional. Everyone is going to be pushed to the limits.

Fan reaction to this series is nothing short of a miracle. Kripke thinks it’s because “people are really responding to the superhero bit of turning it on its head. But even more than that, I think people are really responding to the characters and I think they’re falling in love with them, which is due almost entirely to this amazing cast”. The cast is pretty amazing if we do say so ourselves. There’s also the satire, social commentary, and special effects that really pull us in. “We try to make this not just like the most realistic superhero show ever made, but we try to make it kind of a commentary on the up to the minute world we’re living in”, says Kripke. The show is a melting pot of politics, celebrity status, social media, and media manipulation. “it says so much about the world that we’re in”, he continues, “that we really try to get some pretty sharp commentary”.

Season 1 had themes of the Me Too movement, the American weapons industry, and political issues. Season 2 will continue with that but also go after white supremacy, white nationalism, and systemic racism. “We continue and probably will make it even edgier”, says Kripke. “The three triangles of the show are always strong characters first. Madness second, which we have, and then if we can sneak in some revelations or discussions about the real world, then we will do that too. You’ll see that in season two”.

We are ready, honey.

As a cool gift to the fans, the panel surprised us with a new scene from the series, titled “The Whale”. Take a look. Aisha assured us, “No super large mammals were hurt in the making of this scene”. Turns out the stunts were real. Karl Urban was actually driving the boat. “I really was surprised and thrilled about”, says Karl, “the way that we shot that was you had all of us actors in the boat and we were actually doing it we had a helicopter that was hovering, 80 to 100 feet in the air, flying along parallel with us and flying around us. It’s just you never get to really experience what we did you know, doing something for real anymore. It’s usually like all done on the green screen, but we were actually out there in the water, doing horrendous speeds, and having fun”. Along with the boat ride, a huge whale was built and stuffed with fake blood, guts, and garbage. “It was very practical”, says Karl, “We actually end up inside the whale without giving too much away. And it was a pretty surreal experience and pretty hot and stinky in the Canadian summer”. We can’t wait to see the rest of that episode.

Another thing we get to look forward to with The Boys season two is the odd couple pairings and seeing everyone get out of the poop they find themselves in. “One of the things that season two does really successfully is throw people together unlikely combinations of characters together, and you get to see how they bounce off each other and interact”, says Karl. The character dynamics are already established and extremely fun to watch, so seeing pair offs that we didn’t get to see in season one could make for some entertaining tv. Oh, the possibilities. We will also learn more about who Butcher is and the truth about his family.

We will get to see how emotionally bruised Homelander is. “The strongest physical man on the show is the weakest emotionally on the show in my opinion and it’s really fun to bounce in and out of that”, says Antony. We will see how Hughie is doing after the chaos of season one. For Hughie in season 2, “He’s just kind of starting to realize who he is on the inside and what he wants to do not just in relation to what people like Butcher or even The Boys or Starlight are wanting to do”, says Jack. We will also see Starlight step into her own power and into her own strengths. There’s a lot to figure out after the epic fight between Starlight and A-Train in season one. A-train is a wreck, pun intended. We will see the physical and mental torture he has to go through in season two because of his addiction. All the characters have a lot to prove, make up for, or come back from after season one. September can’t come soon enough.

As the panel wrapped, executive producers, Seth Rogen and Evan Goldberg made an appearance to let us know that The Boys has already been renewed for a third season. When and where they will start shooting is still to be determined because you know, as the kids are calling it, Miss Rona. Season 2 will debut September 4 on Amazon Prime Video with the first three episodes, then on a weekly basis after. There will also be a brand new after-show hosted by Aisha Tyler called Prime Rewind that will dive into the episode of The Boys each week.