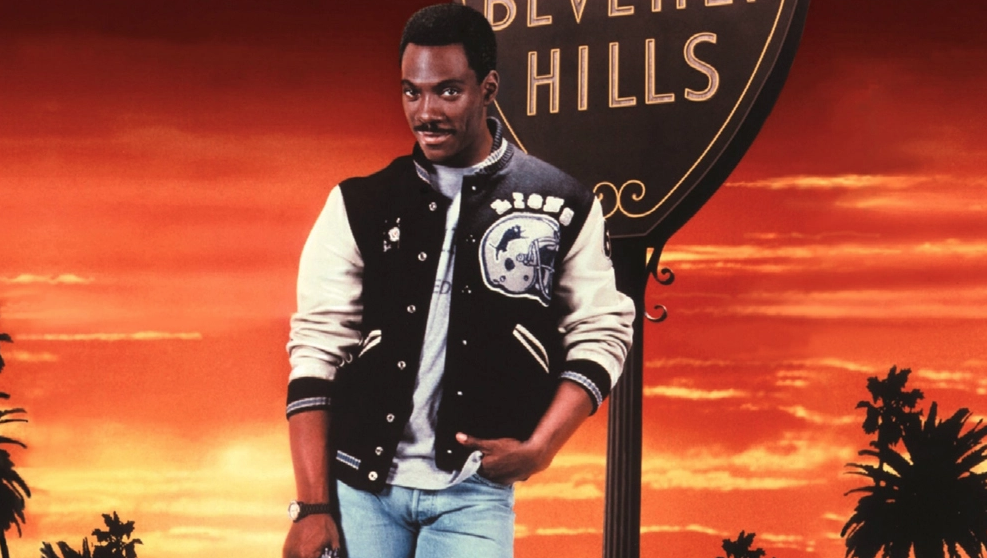 An interesting thing happens at the beginning of Beverly Hills Cop. As up-tempo ’80s pop plays over the opening credits, director Martin Brest and cinematographer Bruce Surtees provide establishing shots of Detroit, protagonist Axel Foley’s hometown. But, where many comedies might opt to highlight and exaggerate Detroit’s derelict parts — especially in comparison to Beverly Hills’ glamour — Beverly Hills Cop, instead, provides these images in addition to showing smiling faces inhabiting them. There are the people hard at work at the auto plant; there are the folks of all colors brown-bagging liquor and hanging on the stoop; there are kids playing in front of burnt out buildings, oblivious, or unconcerned, with their surroundings. If this sounds depressing, it isn’t.

Beverly Hills Cop is a comedy that, with all its sincere moments and parodying of uptight upper-class attitudes, inadvertently celebrates Detroit in all of its grit and grime.

Enter Axel Foley, a young detective and a product of this industrial city. Like many ’80s action film detectives, he doesn’t play by the rules: his boss has had it with his actions, and his latest exploit involved a car chase, a couple explosions, and just about every cruiser owned by Detroit PD. Still, he’s the best man for the job, and when the job requires him to investigate his childhood friend’s murder, he’ll take his street knowledge from the Motor City to Rodeo Drive in order to uncover the truth.

Eddie Murphy shines as Axel Foley. His performance, along with Judge Reinhold’s as Detective William “Billy” Rosewood, may be the main reason to watch the film. These two, supported by John Ashton as the surly Sergeant John Taggart and Jonathan Banks (Mike from Breaking Bad) as a dead-eyed assassin, give heart and levity to a film that, with lesser-known actors, would have fallen flat.

Foley travels to LA after witnessing his friend Michael “Mikey” Tandino (James Russo) murdered by hit men who claim he stole 10,000 in Deutschmarks from their mysterious employer. Despite his boss, Inspector Douglas Todd (Gilbert R. Hill), explicitly ordering him “to stay away from this one,” Foley takes some vacation time to investigate the out-of-jurisdiction murder. Once in Beverly Hills, Foley runs into obstacles provided not only by the rich and menacing Victor Maitland (Steven Berkoff) but also by the local police department, which sees Maitland as an upstanding citizen and Foley as troublemaker unable — or unwilling — to color within the lines.

Beverly Hills Cop works as an action movie supported by Eddie Murphy’s comedic timing and inexhaustible charisma. Reinhold’s goofy but endearing Det. Rosewood also provides heart and hearty laughs. Lisa Eilbacher, likewise, in her supporting role as Foley’s friend and Maitland’s employee, deserves praise for bringing genuine feeling to the film, especially in the scene where she learns about Tandino’s death and her boss’ potential involvement.

Of course, the film has its drawbacks as well. For one, it doesn’t shy away from tired clichés. For example, we are given not one, not two, but three police commanders who want to see this or that detective “in [his] office.” Additionally, the hero inevitably takes out the secondary villain only to have the primary antagonist shoot and/or stab him from behind. And finally, the villain must die in a hail of gunfire, no matter how improbable it is that a millionaire with legitimate income and lawyers to spare would shoot it out with the police. One can claim “Hey, it’s an action movie,” but Beverly Hills Cop has too many quiet moments of real introspection to cop out like that.

Interestingly, watching the film in 2022, the phrase “copanganda” comes to mind. In an age where there are calls to defund — and even abolish — police, it is interesting to watch Beverly Hills Cop and look for its messaging about policing in America. So, is this film copaganda?

Foley, the film’s hero, never rats on other cops, even when it would be right to do so. For example, Sgt. Taggart’s introduction as a character is when he assaults Foley for mouthing off to him during questioning. Taggart’s boss, Lieutenant Andrew Bogomil (Ronny Cox), immediately reprimands Taggart and even asks Foley if he wants to press charges. Foley declines because he finds it wrong to tell on other officers — even, apparently, the violent ones. Foley instead chooses to call Taggart a homophobic slur and insult his punching strength. Taggart will go on to become one of the film’s heroes, but learning “don’t hit suspects” isn’t a part of his character arc. In all, the film seems to applaud the Blue Wall of Silence as a necessary evil for cops who occasionally have to be as shady as the bad guys they chase. To this end, the film shows Foley frequently lie to higher-ups about what has transpired in any given situation, which the film portrays as something any cop worth their salt should do if bureaucracy is impeding “justice.”

Another aspect surprising in retrospect is the film’s refusal to discuss race. Yes, race comes up in comedic bits where Foley cons a hotel into giving him a room, lest he label them racist if they don’t, or where he reprimands a customs agent for letting “a Black man dressed like [him]” walk around a secure warehouse, but, besides these instances, Beverly Hills Cop exists in a world where white LAPD officers have unpleasant interactions with Black men based more on class and that man’s actions rather than racial bias. In fact, there’s a moment early in the film where the movie — released 13 years after Nixon’s declaration of war on drugs and eight years before the LA riots — seems poised to address why two almost identical white officers arrest Foley for “public disturbance” despite him being the clear victim, but, instead, later dialogue will color this interaction as an issue concerning class and demeanor above all else. Beverly Hills Cop portrays the men (yes, “men,” as there are no female officers in this film’s universe) of both the Detroit and Los Angeles police departments as inclusive, with white and Black officers of both precincts showing little racial animosity or resentment — except, perhaps, for the instant where Foley chides a Black Beverly Hills detective for talking white.

If this all sounds like an unfair assessment based on nearly forty years of hindsight, keep in mind that 1971’s Dirty Harry at least tangentially addressed white officers’ potential resentment towards marginalized officers, even if the moment is played for laughs, and 1974’s Blazing Saddles did the same a decade before Beverly Hills Cop screenwriter Daniel Petrie Jr. brought his own characters to the screen. For a film that largely takes its characters, story, and audience seriously, this lack of commentary feels like a shocking absence.

Overall, Beverly Hills Cop is a lot of fun with a lot of heart. Clichés and toothless social commentary aside, we still have fun watching Eddie Murphy give new life to the fish-out-water scenario. As Axel Foley, Murphy melts away our criticisms of how preposterous this or that action scene might be, and Judge Reinhold’s Detective Rosewood makes us belly laugh as a goofy, sincere cop who wants to do the right thing, even if it means eschewing bureaucracy and bending some rules.

And, as if it really needs to be said, the soundtrack, especially title track “Axel F” by composer Harold Faltermeyer is damn good. Prepare to replay the song in your head for weeks on end.

Beverly Hills Cop is available to stream on HBO Max.

‘Coming To America 2’ Is Officially Underway With A New Director