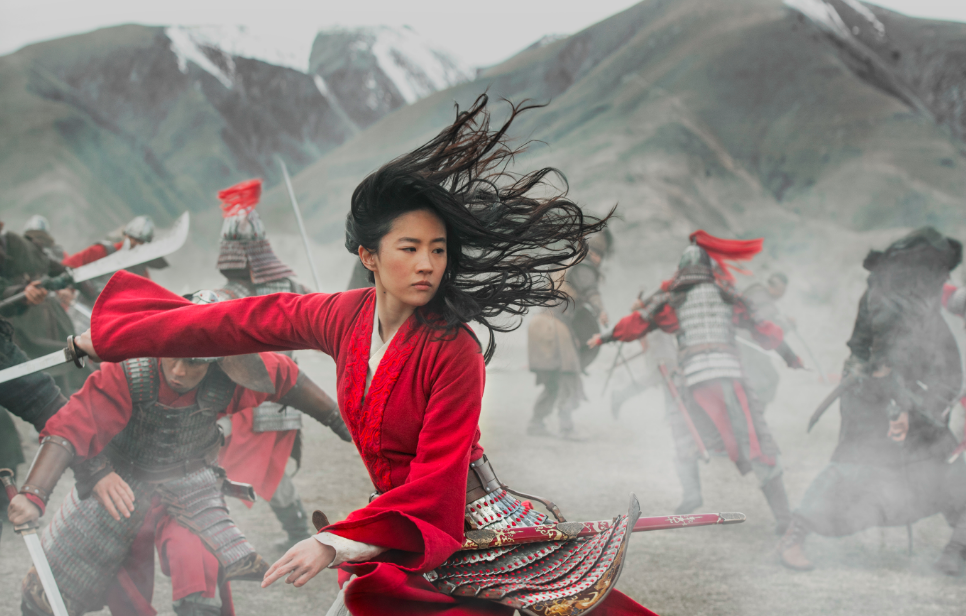 Another amazing 1990s animated film has been remade as live-action. Disney is doing its darndest to bring us live versions of our favorite characters. 2019 alone brought us, Maleficent: Mistress of Evil, Dumbo, Aladdin, Lady and the Tramp, and The Lion King. So far, Disney is 50/50 at the critic’s table. But, from our point of view, Mulan (2020) may be the film to get Disney’s live-action wagon back on track.

Don’t expect to sing along with catchy songs, but expect to fall in love with Mulan all over again. The film is emotional, beautifully shot, and all-around enjoyable. Mulan is the second Disney film with a female director with a budget above $100 million following A Wrinkle in Time. The female eye contributes well to the story. In fact, it’s the only movie of this scale and genre where all the voices, all the people running it, were women. From cinematographer, first AD, co-producer, costume designer, makeup designer–the film was very female-led. “Being female-led, we were very well prepared and communicated effectively. Brought it in on time and slightly under budget, because that’s just how we roll,” said director Niki Caro. This live-action version keeps the Mulan millennials grew up with, alive and well while transforming her into the hero we all need today. She is still the best role-model in the Disney princess world. As Caro put it, we can all be “so grateful that in a time of princesses, here was a warrior.”

Sticking to the major plot points of the original 1300-year-old Chinese legend, “Ballad of Mulan,” Mulan follows the titular character as she disguises herself as a man to save her ailing father from serving in the army. With northern invaders attacking China, Mulan’s love for her country, courage, and honor are put to the test. The film is directed by New Zealand film director Niki Caro (McFarland USA, Whale Rider) and stars Yifei Liu (The Four, The Assassins) as Mulan. The all-Asian cast also includes notable names like Donnie Yen (Rogue One, Ip Man), Li Gong (Memoirs of a Geisha, Miami Vice), Jet Li (The Expendables, Romeo Must Die), Jason Scott Lee (Dragon, Lilo & Stitch), Tzi Ma (The Farewell, The Man in the High Castle), and Rosalind Chao (The Joy Luck Club, The Laundromat). Caro knew she had something big and knew her responsibility was to “the story, to the studio, and to the audience.” We can say, she didn’t fail the audience.

Maybe it’s best for Disney to stick with live-action people than animal stories because this worked out a lot better than the latest films. It’s visually gorgeous. The pop of bold colors provides a nice contrast to the wide shots of mountain and dessert that have monochromatic aspects. The action sequences are fun to watch. The martial art styles displayed are beautifully shot. The strategy behind filming in a geothermal valley with smoke and steam adds to the suspense of the battles. But what it boils down to is the character performance of Mulan. This version of Mulan’s character works well within the story. With the added details surrounding her family, we get a bigger picture of her strength, confidence, and bravery from a very young age. These are characteristics she didn’t have to learn while in the military, but everyone else did. The ending for Mulan was very satisfying. It gave off a stronger theme of woman empowerment than the animated version. “It’s the journey from village girl, to male soldier, to warrior and hero that felt like it spoke for all of us,” said Caro during a Q&A. It’s a statement that summarizes Mulan in the perfect way.

Two aspects of Mulan that remained true throughout the entire film were her ideals of family and country. Her interactions with Honghui (Yoson An) were subtle. It wasn’t about a potential relationship. It was all about Mulan. Yifei Liu as Mulan works on so many levels. Her personal martial arts experience adds to the visual language of the film. She also pulls off looking like one of the boys while also holding on to who Mulan is inside. She is the strong silent type, which is the best representation of Mulan. She doesn’t try to be gimmicky but lends a realistic touch to the story. Liu gave her all with her acting and physicality, doing most of the stunt work, to bring Mulan to life.

While there’s only one song to learn lyrics to, the music is a nice nod to the ’90s animated version while providing fuel to keep the film moving along. The one song that is already memorized and sung out loud in cars is a powerful ballad performed by none other than Christina Aguilera titled, “Loyal Brave True.” She sang the credit’s version of “Reflection” in the ’90s animated, and she’s back with her amazing vocals in 2020. It ends the film beautifully while summing up what Mulan is all about.

Two things that didn’t work well in the story were the villain and the ancestor spirit guardian. If there’s one thing we know about Disney, it has to have some form of magical element, even in its live-action films. These two plot devices utilized the majority of the “magic”. When looking at the villain from the ’90s animated film, Shan Yu was a scary, large man on a mission. He was strong, strategic, and had a crew who knew what they were doing when it came to tracking. In this updated version of Mulan, the villain is an evil sorceress Xianniang, played by Li Gong, who unfortunately feels underdeveloped. Mystical powers are her only trick. She tries to get into Mulan’s head with her words on women never being seen as equal to men but, of course, Mulan rises above. This villain isn’t the best we’ve seen in the Disney universe, but she provides a stark contrast to Mulan and the idea that women can do anything regardless of what others think.

The other underdeveloped aspect is the Phoenix, which is supposed to take the place of Mushu as the spirit guardian. While some people weren’t fans of Mushu in the animated tale, he was there for story purposes and provided some nice comic relief. The Phoenix doesn’t talk, doesn’t interact much, and honestly adds nothing to the story. It appears randomly and sporadically in the film and is not much of an energy push or big revelation for Mulan. If they didn’t want a Mushu, they should have let the spirit guardian be more of an internal thing. This one didn’t function as a guide but was merely a nice piece of beautiful CGI to look at occasionally.

The critical difference between what the animation did and what the film does is having the animated Mulan disguise herself as a man to find herself versus today’s version having Mulan learn that she can never be powerful until she loses that disguise. It’s what we need today. It’s upsetting that Mulan won’t get the big debut that audiences were hoping for in theaters. This highly anticipated film was bound to do well with its original release date. With the success of Disney+, we can only hope that the release of Mulan on the platform will allow more people to enjoy what it brings to the Disney Princess franchise. Here’s hoping Mulan kicks off the legacy of Asian Disney cinema the way Black Panther leveled up Black Disney cinema.

Mulan will be available on Disney+ September 4.