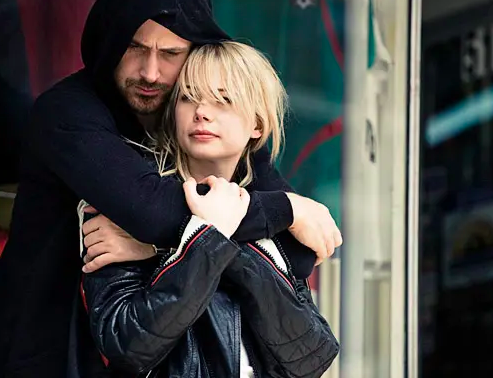 Blue Valentine is much more than just the movie that birthed the “Feminist Ryan Gosling” meme.

Dean (Ryan Gosling) and Cindy (Michelle Williams) seem to have an almost perfect origin love story in Derek Cianfrance’s Blue Valentine. Dean is a hopeless romantic who falls in love at first sight with Cindy. A slightly more pragmatic Cindy is dealing with a lot already, including a beloved and ailing grandmother, an abusive family situation with her mom and dad, as well as finding herself pregnant after a not-entirely-consensual encounter with her boyfriend Bobby (Mike Vogel). But charming Dean is infatuated with Cindy and though he has evident anger management issues from the start, he is fully there for Cindy even when he finds out that the baby isn’t his. Flipping back and forth between the past and present, we watch Dean and Cindy’s romantic entanglement from its inception to its increasingly chaotic dissolution over just a few years with the film’s unflinching gaze.

While Cindy’s original goal of becoming a doctor is sidelined for her nursing career, only five years into their marriage Dean has settled a little too comfortably into family life, with Cindy often accusing him of being her second child. Cindy looks the same as she did when they first met, but Dean’s heavy drinking, smoking, and manual labor-intensive job as a house painter has aged him terribly. But so long as he has his love and his adoring daughter Frankie (Faith Wladyka), Dean is perfectly content with how his life turned out. Not so for Cindy, who still wants to see her potential through and whose boss Dr. Feinberg (Ben Shenkman) has offered her a promotion at a new clinic that she plans to take. After their family dog gets loose and hit by a car, Dean decides he and Cindy need a night alone to reconnect that ends up setting off a series of time bombs that explode in terrible precision, by the end fragmenting the family completely and unceremoniously concluding their initial whirlwind romance.

More recently, A Marriage Story has been shaping discussions about the dissolution of toxic relationships thanks to its spate of award wins. Blue Valentine did the same thing far more realistically back in 2010. Alternating between the nows and thens, Blue Valentine follows the entire arc of Dean and Cindy’s romance, from its sweet beginnings to its heartbreaking descent without the added (unnecessary) drama of high-powered attorneys and the privileges of a divorce when large assets are also involved. Blue Valentine is about regular lower/middle-class folks, with a love story that runs the entirety of its course without the bells and whistles that make other similar visual media into caricatures instead of actual break-up portraits that resonate with audiences who’ve actually been through similar experiences.

Because Dean and Cindy’s love story begins with Disneyfied notions of what a relationship should be, the surprise for the audience comes as we watch this romanticized framework quickly fall apart at the seams thanks to unhealthy expectations and a failure to properly communicate. There is a lot involved in making a relationship work over the long term, especially when children, as well as personal and professional goals, enter the mix, potentially complicating that initial burst of romantic interest. In the case of Dean and Cindy, we even see them planting the toxic seeds early on that will result in their horrible breakup — Dean with his temper and Cindy with her no-nonsense and practical worldview that makes her quickly run out of patience for Dean’s arrested development.

Ryan Gosling’s transformation from gorgeous young charmer to frumpy old man virtually overnight is nothing short of spectacular, though, and he should have received far more accolades for this moving performance. Unfortunately for Dean, all his good deeds and willingness to sacrifice for a daughter who isn’t his natural-born, in the end, don’t end up meaning anything once the relationship with his wife sours beyond repair.

Blue Valentine is much more than just the movie that birthed the fabulous and wildly appropriate  “Feminist Ryan Gosling” meme — he spoke out about the sexism surrounding the film potentially receiving an NC17 rating because of a not-even-graphic scene where he goes down on Cindy. The movie also continues to dismantle the notion of romantic love often promoted by the media industrial complex that fuel the wedding industry and more. Every relationship that ends brings with it its own sense of tragedy and loss. But it’s not every day that a movie will present this ending in a way that actually reflects peoples’ lived experiences in real life. The knowledge that you’ve done everything you can, and if you haven’t, the reckoning for those mistakes, is the sad case with Cindy and Dean.

But Blue Valentine isn’t only hyper-realistic when it comes to the dismantling of the toxic ideas of Disney romance that continue to persist. It also advocates for a kind of reproductive justice we don’t usually see on screen in ways that are true to life. When Cindy first decides to get an abortion and Dean goes with her to the clinic, when Cindy changes her mind, the doctor immediately stops (unlike many conservative criticisms of what happens during this procedure). This narrative is vital since it runs contrary to what anti-choice activists promote, saying that women are forced to go through with these procedures once they’ve simply walked in the door. This is not the case, and it’s rather amazing that with all the important social and cultural work Blue Valentine does to deconstruct and discourage romantic love, it also finds space to represent a highly contested medical procedure in a way that is also true to life. Blue Valentine is a masterpiece on so many levels.

Even more than the heartbreak of watching these two beautiful, kind, lost souls find each other and try to make a home together, there is yet another wrenching catastrophe that only adds to the realistic tragedy of Blue Valentine. Cindy would have had the perfect sexual harassment claim against her boss Dr. Feinberg after she finds out the reason he invited her to the new clinic was so they could “hang out” together after work since the clinic was a longer commute away. But Cindy never has an opportunity to talk with anyone at HR because hurricane Dean enters the clinic, beats up Dr. Feinberg, and Cindy is summarily fired. Not only is her marriage over, but thanks to Dean, her medical career has just jumped the rails, too.

In one of the most memed moment of Blue Valentine older Dean begs Cindy, “You said you would love me for better or worse. Well, this is me at my worst,” pleading for another chance. But unfortunately, sometimes vows said even with the best intentions can’t be maintained when a relationship has gone toxic beyond repair. As we see in Blue Valentine, vows are only as strong as the couple who pledged them, and Dean and Cindy were only briefly on the same page right at the start. Like in real life, that romantic spark is enough to begin an affair, but it isn’t enough to maintain an actual marriage or long-term relationship.

“You always hurt the ones you love, the ones that you shouldn’t hurt at all,” young Dean sings to Cindy with his ukulele as he’s first courting and winning her over, a song with music and lyrics actually by Ryan Gosling himself. “So if I broke your heart last night, it’s because I love you most of all.” It’s such a heart-rending irony that this message appears in a movie that begins with what should have been an epic lifelong love story and instead pivots to the romantic tragedy outlined by Dean’s not-so-silly song. On its 10th birthday, Blue Valentine remains one of the most realistic love stories ever put to screen, reminding us that romance simply isn’t enough when building a life with another person.

Sundance 2019 Review: ‘After The Wedding’