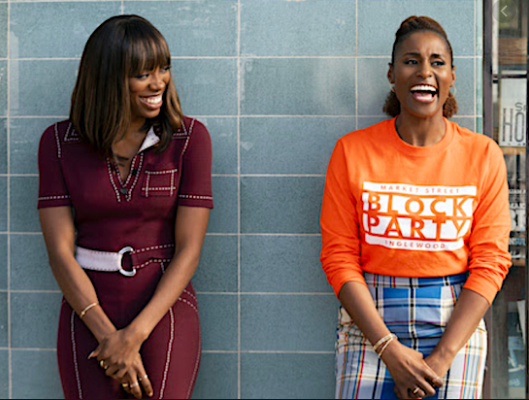 Insecure, written and directed by the fabulous Issa Rae, is coming back with Season 4 on HBO.

Grab your crew and get ready to initiate immediate isolation and chill, because it’s about to get spicy. With Issa (Issa Rae) appearing to have no boyfriend, no job, and an ex, Lawrence (Jay Ellis) booed up with her new friend Condola (Christina Elmore), it looks like Issa’s going to have some struggles this season (but what else is new?).

Things may not be what they seem, as Issa’s finally able to pull off her block party, Molly finally gets with Asian bae, and Lawrence seems to finally settle into another committed relationship. One thing is for sure, we all better get invited to the block party, because I am ready to get down with my bad self during Season 4.

It’s going to be especially interesting to see how the show explores an interracial relationship between Molly (Yvonne Orji) and Andrew (Alexander Hodge). Mainstream television seldom tackles interracial relationships between Black women and Asian men. Asian men have been historically set to contrast Black men in the media. Black men have been wrongfully stereotyped to be hyper-aggressive and masculine, which reinforces the prejudice that they are dangerous and prone to criminal activity. Asian men, on the other hand, have been unjustly stereotyped to be weak and emasculated, which fuels the misconception that they are always the puny, hyper-intelligent guys.

Insecure has already done a great job expressing to audiences that Black men are oppressed by toxic masculinity and gender performativity. I’m eager to see how they flip the script with Andrew (plus, OMG he’s so hot). It’s time for Asian men to be represented for how amazing they are both on and off the screen. I’m shipping Molly and Andrew so hard! According to Molly on the official trailer, so far, it’s “It’s all good sex, and witty banter” — but we shall see.

Like so many Black women, Issa seems to be second-guessing her goals and talents. I hope this is the season that she really comes into her own, while still being our favorite awkward queen. During Season 1, Issa leans on Lawrence, then on Daniel. Then by Season 3, she starts leaning on Nathan. I think that Nathan’s ghosting (which was pretty savage, like, wow!) may have been a blessing in disguise for our girl. While anyone who has been ghosted can attest that that mess hurts, in some cases can lead to a lot of self-growth.

After Nathan ghosted on Issa, she went super stalker mode. She admitted that she wasn’t sure anyone would ever believe in her again as Nathan did. I think that the inspiration and support that he gave her needs to come from within herself. It looks like he’s not in the picture this season — at least not as her man anyway. Yet, Issa is still going for the block party, and it looks lit! Maybe Season 4 is gonna be all about Issa nourishing a foundation of self-love for herself — but of course with some socially awkward flirtation along the way.

I can’t wait to see how Molly and Issa’s friendship evolves this season, too. It’s been heartening to see both of them grow through the thick of it when it comes to their sisterly bond. I think that most people with that kind of ride-or-die bestie can understand and appreciate their relationship. Even when Issa and Molly aren’t speaking to each other, if things get real, they always have each other’s backs. Last season, as with previous seasons, they had a falling out (well, technically a few of them). However, they always come back stronger than ever.

In Season 3, Nathan was helping Issa with her block party. I’m thinking that Molly is going to step up to be Issa’s biggest hype woman for Season 4. No guarantees, but I have a hunch that this season is going to be all about Black women coming into their own even more so than previous seasons. It won’t be long until Insecure finally spills the tea, and you know I’ll be ready.

Now, I know y’all didn’t think I forgot about Kelli (Natasha Rothwell) and Tiffany DuBois (Amanda Seales). Kelli (our goddess of sass and hilarity) is returning with bang. As usual, she’s looking fearless and fabulous. In many ways, Kelli is who I want to be when I grow up. On the flip side, it looks like motherhood is taking a toll on Tiffany. Our favorite boujee princess seems to be finally getting the wake-up call that life isn’t all about being constantly fabulous (unless you’re Kelli, but we already knew that).

Last season, we experienced a new friction between these best friends, as Tiffany steadily replaced Kelli with her new mommy friends. During their Coachella (Beyoncé of us!) misadventures episode, Tiffany becomes unexpectedly vulnerable when expressing to Issa that she didn’t want their friendships to change. The show presented the difficult issue of friendships between people who go in different directions in life. It makes sense — as we get older, our jobs, spouses, hobbies, and lifestyles often send us on divergent paths. It’s good to see that our group of gal pals can still get together in Season 4. We’ll have to stay tuned for how their differing lives affect their friendships. I’m just jazzed that we get to catch up with these phenomenal ladies.

The end of the Season 4 trailer cracked me up, as we see Issa in front of the mirror. This has been the site of Issa’s famous inner dialogue rap sessions for years now. But this time, when she looks at her reflection to do her thing, mirror Issa claps back (talk about some cognitive dissonance). Issa is literally too much for herself, and it’s too funny.

I’m sure we’ve all had that moment in some way or another. We’re trying to hype ourselves up, but then it just fizzles, and we just can’t even with ourselves (or maybe it’s just awkward Black girls, like me and Issa, I don’t know). If we want to be ready for whatever Season 4 throws our way, we all better be prepared to flex our attitudes at the screen like we mean business.

Come on y’all, let’s get this party started!