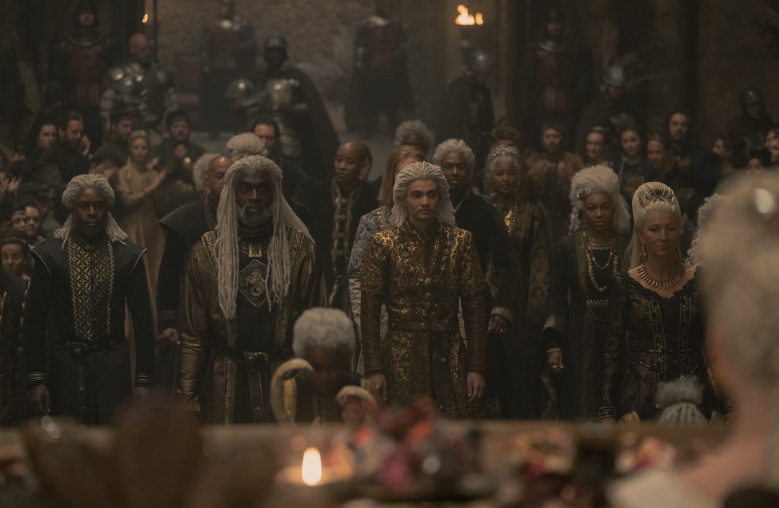 In Episode 5 of House of the Dragon, “We Light the Way,” we gather at the Vale. Runestone seat of House Royce overlooks the sea and Lady Rhea Royce (Rachel Redford) rides on horseback on her way back from a hunt. A hooded figure approaches her, and she immediately recognizes it is Daemon Targaryen (Matt Smith) — her estranged husband.

She asks if he has finally returned to consummate their marriage, to which Daemon offers no reply. Rhea goes on further to say, their sheep are willing, even if she is not. It is evident at this point that she is aware of the cruel things being said about her beyond the Vale. Daemon still doesn’t respond and spooks Rhea’s horse. She hits the ground and is paralyzed. As Daemon begins to walk away, she calls him “craven.” He walks back towards her and picks up a large rock.

As Otto Hightwower (Rhys Ifans) prepares to return to Oldtown, Alicent Hightower (Emily Carey) stops him outside the Red Keep’s gates. Otto suggests that siding with Rhaenyra Targaryen (Milly Alcock) contributed to his dismissal. As Otto continues to pull the strings, even out of the power of being the Hand, he plants a seed in Alicent’s head about her loyalty to Rhaenyra. Otto tells her that Viserys will not live to be an old man. If Rhaenyra succeeds him, the kingdom will be at war, and they will not accept her. The only way to secure her claim is for Rhaenyra to kill her children. He tells her to prepare Aegon to rule or stay close to Rhaenyra and hope she will be merciful.

As Otto’s words still remain indelibly printed in Alicent’s mind, she is approached by Larys Strong (Matthew Needham) in the Godswood. He says, “An outsider among the natives,” comparing Alicent to the novelis flowers indigenous to Braavos blooming in the garden. While Larys is using a flower as a metaphor for Alicent being an outsider to the realm, there is another metaphor of planting and growing happening in this moment. Just as Otto planted the seed to sow division between Alicent and Rhaenrya, arguably Larys is doing the same with Alicent in this scene. However, he is not sowing division, he is seeking allyship. Larys believes Otto’s dismissal was an injustice. Alicent asks him what he knows of it, and he states, “When one is not invited to speak, one learns to instead to observe.” He offers to help.

Viserys Targaryen (Paddy Considine) is on his way to Driftmark and is seasick. He throws up overboard, and Lyonel Strong (Gavin Spokes) gives him a handkerchief to clean himself off. On the lower deck, Rhaenyra and Ser Criston Cole (Fabien Frankel) look ahead at the castle on shore. As the king arrives at Driftmark, Lyonel is outraged Corlys is not present to greet Viserys and company. Instead, they are met with a teenaged Laena (Savannah Steyn).

As they enter the home of the Velaryons, Corlys greets the king and congratulates Lyonel on his new post as Hand of the King. Viserys proposes a marriage between Laenor Targaryen (Theo Nate) and Rhaenyra, noting it is high time their families unite. Corlys is honored but wants some clarification on succession. Viserys confirms Rhaenyra will be Queen, but their firstborn child regardless of gender will inherit the throne. Corlys inquires about the children’s last name as it is customary for them to carry their father’s names. Viserys compromises; the children will bear their father’s name, but when the heir ascends the throne, they will take on the name Targaryen. Corlys and Rhaenys agree to the terms.

Rhaenyra and Laenor walk along the beach. She knows this marriage is not what he would choose, but he says he has nothing against her. They both have their own distinct tastes in what they want and mutually agree that they will have an open marriage where both are free to “dine as they see fit.”

Rhaenys worries that this union will put Laenor in danger as Rhaenyra’s claims will be challenged. Corlys states that with the combined power of their houses, ships, and dragons any opponents will be crushed.

Joffrey Lonmouth (Solly McLeod) and Laenor relax among the dunes, and we finally see the intimacy shared between the two secret lovers. Joffrey unveils to Laenor that he believes Rhaenyra has a paramour of her own.

Rhaenyra sails back home with Criston, and he uses this opportunity to speak with her privately. He suggests that they should elope together to Essos and marry for love and not the crown. Sadly, Rhaenyra turns Criston down as she is loyal to both the crown and the realm. Criston takes this as an insult and asks if he’s her whore. He broke his own vows fornicating with the Princess. Marrying her would restore his honor. Unfortunately, this is not enough for Rhaenyra, and Criston leaves.

As the seed begins to take root, Alicent summons Criston to her chambers. She voices concerns for Rhaenyra and the night Daemon returned. She speaks of the rumors and wonders as Criston is her sworn protector if he knows anything about what Rhaenyra has done. When Criston realizes that Alicent is aware of their tryst, he asks for mercy and requests a quick death as opposed to being tortured. Alicent appreciates his honesty and lets him go unharmed.

In his chambers, Viserys is looked after by the Grand Maester. He is feverish and weak. He wonders if he will be remembered as a good king. What will they say of him when the histories are written? He has never conquered anything or suffered a great defeat. Lyonel assures him that is good fortune, but Viserys notes it’s not the thing songs are written about. Lyonel tells him he’s carried on Jaeherys’ legacy and has kept the peace.

A wedding feast is to begin, and the Velaryons are en route to King’s Landing with their great fleet and dragons. Viserys begins to make a speech when Alicent enters, dressed in Hightower green (as opposed to her usual Targaryen red and black). Jerrold confronts Daemon on Rhea’s death. Daemon disarms him by noting he wishes to collect his inheritance as he is heir to Runestone. After the wedding, he plans to fly to the Eyrie and petition for his land to Lady Jeyne Arryn. Jerrold leaves, shaken.

Joffrey tells Laenor that Criston is Rhaenyra’s paramour. Now they both know each other’s secrets. Joffrey introduces himself to Criston and taunts him about Laenor and Rhaenyra being a good match. This infuriates Criston. Suddenly screams are heard and the crowd surges. Criston is fighting Joffrey, and Laenor tries to help but is pushed off. Criston begins to beat Joffrey’s face in, fatally wounding him.

The wedding resumes, and they seal their union with a kiss. Viserys faints. The camera pans to a rat drinking from a puddle of blood on the floor.

This recap was co-written by Angelica Monk.