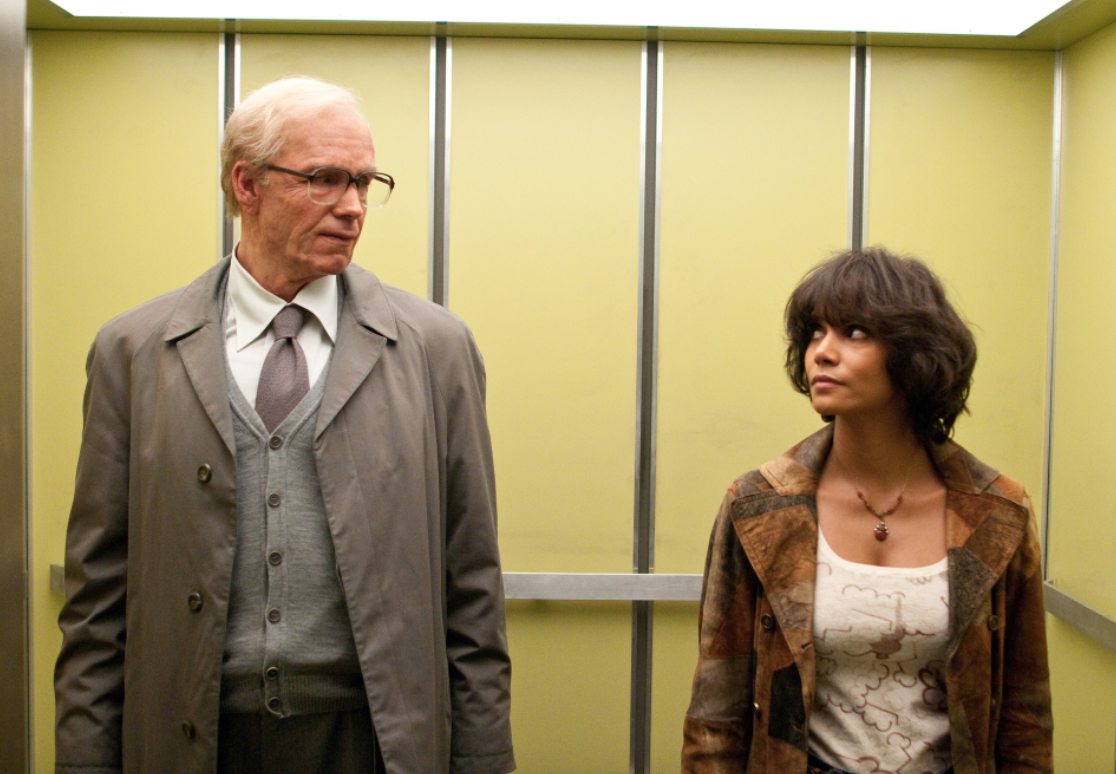 “Our lives are not our own, from womb to tomb we are bound to others. With each crime and every act of kindness we birth our future.” —Sonmi-451

In 2012 the Wachowskis completed one of the most ambitious book-to-screen adaptations arguably of all time, putting David Mitchell’s multigenerational and intergalactic stories-within-stories novel Cloud Atlas to screen. When the novel first came out, Mitchell was told it would never be filmable, with its found texts and major jumps through more than 800 years of human time. But in the capable hands of the Wachowskis and director-composer Tom Tykwer (who also collaborated on the incomparable Sense8), they created a masterpiece that is more than cinema — it’s an opera with its own corresponding symphony.

Cloud Atlas tells the tale of a group of connected souls as they journey through time from 1849 all the way past 2321. Each of these souls in physical form possess the same comet birthmark, just one of the ways their lives are bound together through love and cruelty, oppression and liberation. Each actor in the phenomenal core cast of Doona Bae, Tom Hanks, Halle Berry, Hugo Weaving, Jim Sturgess, Jim Broadbent, Keith David, Ben Whishaw, Xun Zhou, James D’Arcy, and Hugh Grant plays multiple roles across each generation of the intersected stories, including race and gender-bending for all involved. We watch the evolution of some of these souls as they seek freedom, as we also see the impacts of devilish tormentor souls from era to era as they thrive on chaos, exploitation, and subjugation of others. Cloud Atlas uses artful nonlinear storytelling to unfold the many threads of this gorgeous tapestry, which explores the meaning of life and love in the framework of reincarnation.

But unfortunately, Cloud Atlas’s reception was marred by accusations of racism that overshadowed the reality of the film and everything marvelous that played out on screen. Because the story takes place across many generations and involves the same soul returning again again, the film’s creators elected to have the same actor play the corresponding soul even when they had hopped into the body of someone of another race and/or culture. Yes, in the 2144 scenes taking place in Neo-Seoul, there are a number of white actors who have been styled with facial prosthetics into Koreans. Although a bit jarring, this creative choice well serves the message of the narrative that these are the exact same souls we have seen in 1849, 1936, 1973, 2012, 2321, as well as 2144; there is no confusion about who’s who in a story that’s already overloaded with plot details to keep track of.

While the criticisms about “yellowface” are legitimate on one hand, these critics have overlooked the fact that everyone in this movie plays a race or gender that’s not their own at some point. Halle Berry is almost unrecognizable as a white, Jewish woman in 1936 as well as a male Korean doctor in 2144 and an Indian woman decked in a red sari in 2012. Doona Bae plays a Mexican woman in 1973, as well as a white woman in 1849, and Xun Zhou plays a white man in 1936. Indeed, it’s a bit strange to witness, and in any other context than a film about reincarnation it would be beyond inappropriate. But in Cloud Atlas, this racebending works. You just have to let it.

Another accusation lobbed at Cloud Atlas was its depiction of the imaginary Kona tribe during the narrative portion taking place in Hawai’i. Because the group are fashioned after an amalgamation of Indigenous markings and garb, and their name is a Hawaiian word, many assumed this was another problematic moment of “brownface” in the film. However, there’s an important alternate reading many critics missed: All the actors playing the Kona are white, and since the Kona aren’t actually a tribe from history, I read this group of violent cannibals as white men cultural appropriators and colonizers who have stolen aspects of tribal identities from around the world and now use them to terrorize other people. They have made themselves look tribal, but they aren’t. The Kona are essentially white devils playing dress-up, which changes how I’ve engaged with the narrative and makes these scenes even more terrifying in context.

I also need to point out that not one single actor of color in Cloud Atlas plays a villain at any point in the movie; the bad guys are always white actors either as white or another race. Interestingly, the two souls who were evil across the board with no exception were played by white actors Hugh Grant and Hugo Weaving, embedding a clever commentary about whiteness and white devilry that seems to transcend the complicated racial politics of Cloud Atlas in many ways. The film also manages to make time for a damning critique of guns as the devil’s tools across generations, a necessary message for Americans in particular.

With these complicated racebending matters put to the side, my favorite thing about Cloud Atlas is its absence of a white savior narrative that you’d almost come to expect in an intergenerational story created by Americans. In 1849, Autua (David Gyasi) frees himself from slavery as a stowaway and earns his spot on the ship due to his own mental and physical capabilities. In fact, Autua saves Adam Ewing (Jim Sturgess) from the vile machinations of Dr. Goose (Tom Hanks), disrupting a white savior narrative almost from the get-go. Sonmi-451 (Doona Bae) — and her universe-shifting manifesto that includes the psalms, “Truth is singular,” and, “Death is only a doorway” — is an Asian woman who began life as a service clone and goes on to become a religious figure around the galaxy. Luisa Rey (Halle Berry) is a Black journalist who thwarts a nuclear disaster in 1973, and it is Luisa’s soul incarnated into Meronym in 2321 that ultimately saves both body and soul of troubled Zachry (Tom Hanks), as well as many generations of Prescients out in space.

There has never been a film like Cloud Atlas, and there probably never will be again. This kind of expansive narrative with so many millions of moving parts is no easy feat; the editing alone is a masterpiece of nonlinear storytelling that I can’t even begin to imagine how it came together in just 3 hours of screen time. Every time I watch this movie I wish it would never end. Then I remember, what we see in those 3 hours is only a snapshot of these souls’ adventures from 1849 to two generations past 2031. Their stories continued long before I met them and will continue long after, making this one of the most hopeful movies ever made.

Alongside so much violence, destruction, oppression — and the persistence of (white) devils who torture and torment unsuspecting souls — Cloud Atlas manages to conclude with a message that eventually our damaged souls can heal and find peace. From womb to tomb we are connected, and we also remain linked for life cycle upon cycle after that fact. On its 10th anniversary, Cloud Atlas is humanism at its most poignant and a manifesto in its own right about the power of love to change the very natures of existence, one soul at a time.