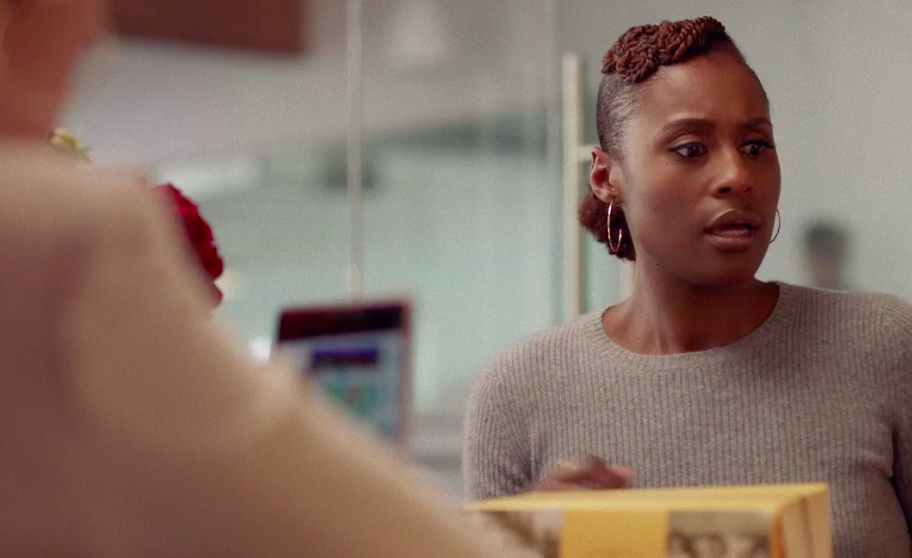 Season 4 of HBO’s Insecure returns with the women of Insecure in front and behind the camera creatively telling the story of Issa’s journey this season.

This includes Issa Rae herself, as the titular character writing the episode “Lowkey Feelin’ Myself” and Natasha Rothwell (Kelli) acting as supervising producer. Issa Rae also puts her executive producer hat back on in this episode, and Queen & Slim director Melina Matsoukas joins her for the ride. Of course, we’re excited about the recent accomplishments of Insecure TV showrunner Prentice Penny’s work in his directorial debut this year in Netflix’s Uncorked.

We meet Condola (Christina Elmore), a new friend and colleague of Issa’s who is helping to prepare an impending block party mixer for a group of potential sponsors. At first glance, things appear bubbly and bright between the two and they share some pretty great chemistry. There’s almost a concern if Molly could be some sort of third wheel here, these two are so chummy. However, that quickly falls apart when a now-pregnant Tiffany (Amanda Seales) drops a truth bomb on Issa that she introduced Lawrence (Jay Ellis) to Condola at her baby shower.

So now the plot of Season 4 has reached a conundrum that begs the question nearly 10 minutes into the first episode: Will Issa keep this new friendship or let the ghost of her boyfriend’s past haunt her forever? This ghost has compromised her relationship with Daniel (Y’lan Noel) and has led to a myriad of bad decisions. And then there’s Molly (Yvonne Orji).

Molly is now in a Blasian relationship; that’s right, she’s got an Asian boo named Andrew (Alexander Hodge) who is fine as hell, and he’s actually someone who is interested in a casual relationship. Someone who is finally up to Molly’s speed. But now the tables have turned and Molly actually likes this guy and wants this thing to be exclusive, so she feels some type of way about it.

Unfortunately, Molly’s gonna Molly. She takes out her insecurity about her own shortcomings on Issa and insults her rather than deal with the problem directly. But also, there’s some saltiness coming from Molly because there is a tinge of jealousy about Issa’s newfound friendship with Condola. This is a conflict arc that we will see develop this season, I’m sure.

It is such a pleasure to see Jay Ellis make his return to Insecure since many of us fans had gone through some withdrawal last season. There are the Lawrence haters out there, so they may not have missed him, but I certainly have.

Issa has a new boo, too. He’s not the traditionally hot guy you would typically see Issa with, and, believe it or not, I find that refreshing. I like that Issa is willing to date a big guy or someone who may not be physically attractive. She likes who she likes, and she’s not picky or superficial in the looks department.

Molly, Kelli, and Tiffany back together is also just another way for us all to remember why we love this ensemble cast so much and we just cannot get enough of Kelli and her wild shenanigans. This season is quickly starting on a pace to dealing with a conflict between Issa and Lawrence and now a new thorn — Condola — which hearkens back to their Season 1 arc. With the passage of time, new relationships, and a sense of renewal, it will be interesting to see how these two will deal with this new kind of conflict in Season 4.