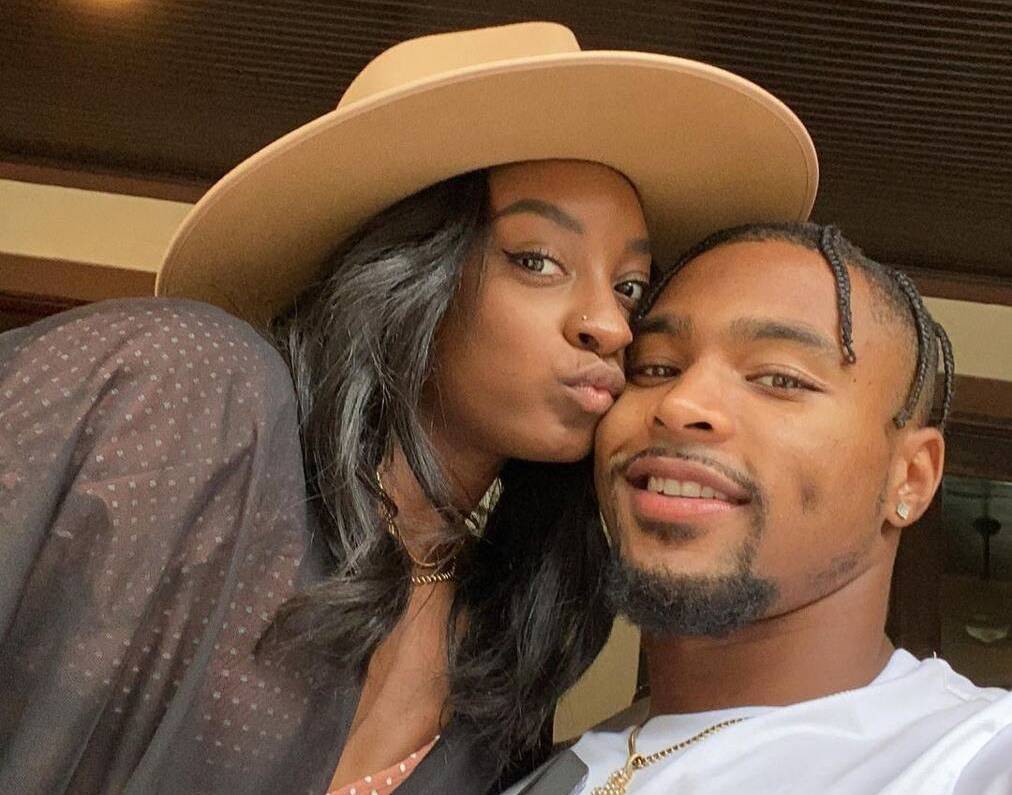 2021 has been a big year for Simone Biles, who made a major statement by stepping down from the Tokyo Olympics to focus on her mental health, has contributed to some major charitable causes, and has been making headlines over her relationship with her super handsome athlete boyfriend.

The gorgeous gold medalist is “just laughing through life” according to her Instagram bio, raising her pups as a self-proclaimed dog mom, and enjoying a delicious slice of pizza when she can as a self-proclaimed pizza connoisseur. Her relationship with Jonathon Owens isn’t the only thing she’s got going on by any means, but it’s certainly one of the most interesting things. Here’s what we know about her relationship so far.

Who is Jonathon Owens?

Jonathan Owens describes himself as “just a kid from St. Louis” in his Instagram bio, but there’s so much more to him than that. His IG feed showcases his career as a football star, and he currently holds the position of safety for the Houston Texans. After joining the NFL in 2018, he started out playing for the Arizona Cardinals. By 2019, he was ready to make the team switch. He officially signed with the Texans in 2020, which worked out perfectly for him because he was able to cross paths with Simone Biles in the Houston area.

That might not have happened had he not traded teams. As it stands today, Owens has a net worth of about $50 million according to Finance Yahoo. It’s obvious he’s doing well for himself in the NFL. He is very fitness-focused and even enjoys doing Pilates (one of the best forms of exercise you can do for your body). Now that he’s been publicly dating Biles, the spotlight is on him more than ever.

Where did they meet?

Famous people are just like regular people when it comes to the dating scene. It’s not always the easiest thing in the world to meet someone organically, so dating apps have become an easy way for folks to get to know each other. Celebrities don’t hop on Tinder or Bumble though because they’d likely be harassed by groupies and fans. Instead, they use a dating app called Raya, which is reserved for only the most elite individuals ever from actors to athletes to social media influencers.

When Simone Biles and Jonathon Owens matched on Raya, he apparently didn’t even know about her impressive gymnastics career. According to Us Magazine, he said, “Her work ethic was really the first thing that caught my eye. I never really watched gymnastics before I first started talking to her. When I met her, I honestly didn’t know who she was. It was like, ‘Oh, she has a lot of followers — she must be pretty good or something.'” He must’ve been absolutely blown away to discover just how accomplished she is.

How serious is the relationship?

The relationship between Simone Biles and Jonathan Owens seems to be pretty serious, at least from the outside looking in. After meeting in March 2020 (at the very start of the worldwide pandemic), they totally hit it off. They squeezed in plenty of romantic adventures together despite how inconveniencing the pandemic has been. Quarantining together through COVID-19 obviously brought them a lot closer. They posted their first picture together in August 2020 proving to the world they were ready to become Instagram official. Their relationship was met with a lot of excitement from all of their fans. They celebrated Christmas and New Year’s Eve 2020 together and, at the time, even posted pictures of themselves wearing matching pajamas.

These two heavily support each other when it comes to their athletic dreams as well. Biles congratulated Owens on his third year in the NFL with an Instagram post saying, “Year 3 in the books — couldn’t be more proud of you.” In June 2021 after watching Biles compete, Owens posted, “What an amazing experience. First time getting to watch you compete in person and you didn’t disappoint. It’s so cool that I get to watch you do what you love and be the best at that! I’m so proud of you my lil champ.”

Whether it’s about his football or her gymnastics, they’ve got each other’s backs. Posting sweet selfies together and packing on the PDA whenever they’re out and about gives us the inclination that they’re very happy together. Another hint is that they are super comfortable coordinating matching outfits when they go out on their date nights, proving they are super in sync with each other.

Prior to dating Jonathon Owens, Simone Biles was linked to Stacey Ervin Jr. He’s also a gymnast, and they met in August 2014. They made things official by August 2017 but by March 2020, they confirmed their split. It didn’t take her long to move on because that’s the same month she linked up with Owens.

These days, Biles and Owens appear to be very happy. As long as they’re supporting each other in the ways they already do, they’re in for a long and healthy relationship.