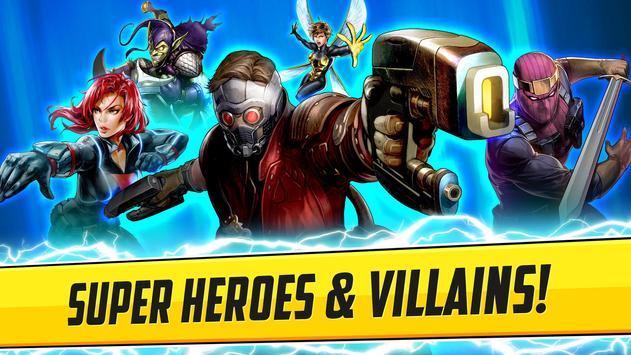 Marvel is a multi-million dollar franchise with numerous films, TV shows, comic books, and games. So it makes sense that the lucrative lure of mobile gaming would come calling. That’s why Nexon and Marvel have released Marvel Battle Lines, an online strategy card battle game. It features every Marvel hero you could possibly think of and many more. MARVEL Battle Lines is set on a 3×4 grid, where players compete with a custom deck of 12 characters and ability cards.  The players deploy the cards to the battlefield in order to defeat their opponent.

Gameplay is simple but intuitive. It is essentially Tic-Tac-Toe with virtual cards. The aforementioned twist is the added level of strategy of picking a card that will not only knock opponents off the grid — it will also deplete the health of the enemy on the other side of the board. The goal is to find the optimal cards to encapsulate that invaluable three/four in a row. 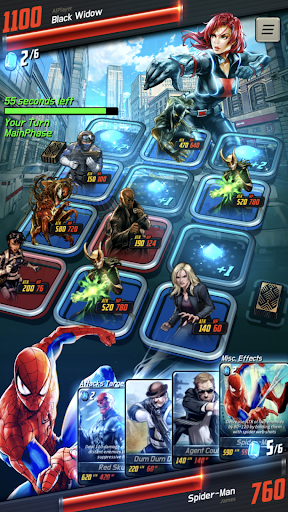 I found it suitably addictive to select cards and watch the corresponding character materialize on the grid. The strategy of obtaining that perfect stretch of three is exhilarating and at times frustrating. However, it’s not so intense that it can’t be played casually in spurts and segments. I would pick up my phone to play a stage during a spare moment, with the luxury of leaving the other challenges for later.

You pick a card to play by dragging it to an empty square on the grid near an enemy to summon whatever character is on it. Squirrel Girl, Hawkeye, Spiderman, etc. Your primary goal is to get three or four characters in a vertical or horizontal line. Once there, those characters simultaneously unleash a powerful attack on everything in its radius. Don’t be deceived by its elementary design! I found that familiarity breeds vulnerability and ended up underestimating the A.I. at my own peril.

The beginning of the game takes its time in demonstrating the basics with copious hand-holding through the starting battles. Absorbing Man (who was revived for modern audiences in Agents of Shield) is one of the first villains each player fights and the battles are a breeze. I barely finished my turn before the game drops Iron Man in for assistance. He slips in two high-level cards that automatically complete my row of three and I decimate my opponent. This continues for about the next three fights, causing me to develop a false sense of security. It’s easy to become complacent when waiting for Hawkeye or Tony Stark to tip the scales in your favor.

If this is disappointing for mobile fans looking for a challenge, don’t worry because halfway through the second stage, the game will dump the player character into an exceedingly difficult duel with Hela (a villain from Thor’s neck of the Marvel Universe). It’s so difficult that she has no total on her health bar! It is an impossible fight to win, but the player is still required to progress to a certain point in order to pass the stage. It’s a test of the player’s skills. Apparently, I paid no attention during the tutorial, if the multiple game overs were any indication. 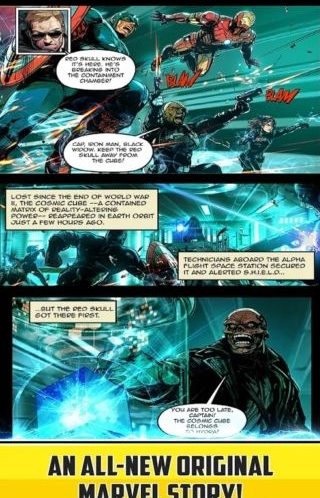 When not engaging in grid-based card battles, you are thrust into a single player campaign which has an original story written by Marvel writer Alex Irvine. Irvine is known for his Marvel game storylines, and this is another of his creations. The main campaign is told in a traditional comic book style punctuated by vivid art and moving panels. Our heroes are rushing to the location of an ancient all-powerful cosmic space cube that is in danger of falling into the hands of the villain Red Skull. The visual presentation is well done. It’s told in the style of a comic book but it’s not static. There’s always a lot of movement and color to engage the eye.

As for the story, it’s serviceable. There is a magical MacGuffin that is so powerful it brings out every villain in the Marvel universe in pursuit. And, of course, the player character has some special ability, forcing the Avengers to take them on.

For the uninitiated, each Marvel character in the game gets their own introduction, along with some backstory. As someone who only loosely follows the movie universe, I didn’t have any difficulty understanding the extraneous comic book talk. In fact, allusions and callbacks to past storylines and character history provided an added depth to the campaign. Battle Lines offers enough background information that there is always some context to whatever is going on. Non-Marvel fans can engage with an elementary knowledge of Marvel and its universe. Can they enjoy it? That’s another matter.

The dialogue can be punchy and witty at times. Of course, Iron Man gets some of the best lines. The little dialogue interjections from the characters during battles add some welcome flavor text to the proceedings. But other than that, there’s just not a lot to chew on. It’s essentially window dressing for the battles. The story exists purely in the realm of “Hey, a villain wants a thing? Let’s battle!” And that’s just fine. The game is called Battle Lines, not Infinity Avengers Civil War Apocalypse. It’s there to service the battles. Just don’t expect a comic book worthy story line.

In addition to the main campaign, there is an arena where you can test your skills with an A.I. character and a PVP (player vs. player) battle mode where you can go up against other real-life players online.

Battle Lines also includes the typical mobile game standby of special cards and card packs that can only be bought by in-game gold or real life money. 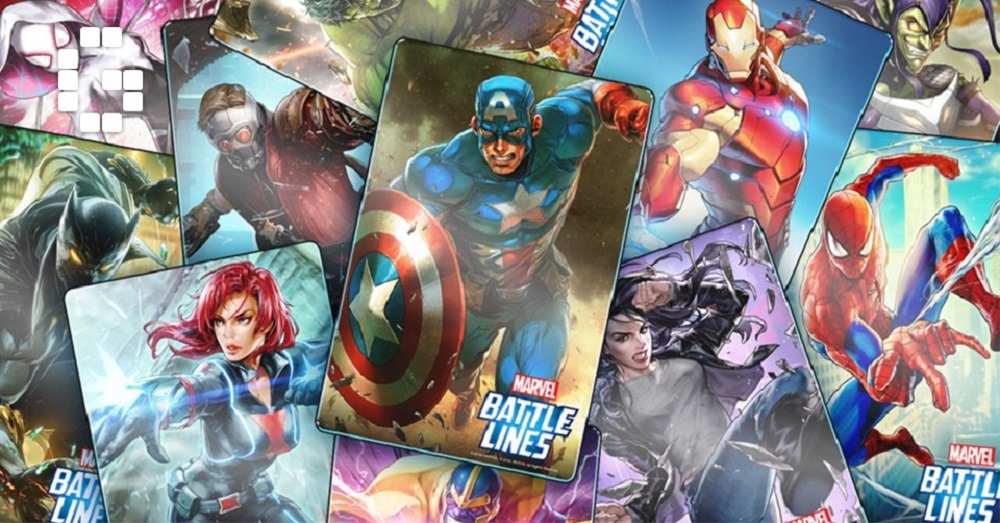 Fortunately, you do get these things in lower quantities after each fight. There’s no push to buy exclusive cards and other content. I found that they also intermittently have free cards packs on timed exclusivity as well.

Strategy games usually make me itch, but it’s seamlessly integrated within the larger battle system here. The endless instructions and statistics that clog up some strategy games are absent. There’s no ATTACK, SPEED, HIT POINT, APTITUDE, MOVEMENT, or any number of unnecessary stats. Taking a quick look at a card’s strength and defense is enough for me to make an educated decision about my next move. And, there is no better feeling in the world than striking three across in this game.

As a straight-up card game, Marvel Battle Lines could stand to be more complicated and strategic. As a grid-based, strategy card battle hybrid, it blends genres very well. The inclusion of Marvel will bring in curious fans of the property, while the accessible gameplay will drive them to continue to pick up their phone and play, over and over again.

You can download Marvel Battle Lines for free on the App Store for iPhone and iPad and on Google Play for Android devices.