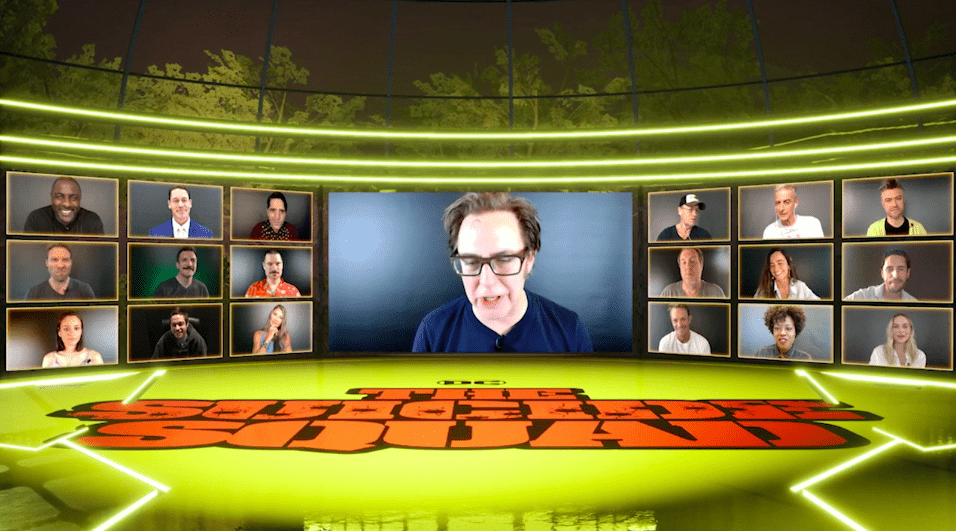 DC FanDome gave us a first look at the new DC film, The Suicide Squad. Writer/director James Gunn (Guardians of the Galaxy) took time to answer some fan questions before diving into some details of the film. After introductions, the panel played a DC version quiz game testing their knowledge of characters in the film and beyond. It was like picking teams for dodgeball in high school; you didn’t want to be last. It was clear this group of panelists had fun on set and off.

Gunn opened the panel with an inviting statement, “I’m so excited to be here at DC FanDome with all the amazing DC fans. As many of you know, The Suicide Squad is by far the most fun I’ve ever had making a movie. I am still working hard on it every day from morning till night, but we’re having a great time creating something incredibly special for people.” While there is no set overview of what the plot of the sequel will be, it has been exciting to learn about the characters and action-packed sequences we can expect next year.

One of the questions a fan had for Gunn involved the first time he ever read a Suicide Squad comic book. “I read John Ostrander’s original run of Suicide Squad, so I remember reading the very first issue of that run and falling in love with the concept of the characters,” said Gunn. Ostrander’s version of the Suicide Squad is a big inspiration for Gunn’s film. Another inspiration was Pail Dini, the writer and producer for Batman: The Animated Series. The character he was always excited to write about was Harley Quinn. “I think that there’s a sort of chaotic Trickster God nature to her, where she’s always going off in random directions, and as a writer that’s a really fun thing to deal with because she takes you in places where you don’t know where you’re going to go,” said Gunn.

Apart from Harley Quinn, The Suicide Squad features a list of under the radar characters. Take a look at the epic roll-call video below.

Of course, we have the returning players for the sequel including, Viola Davis as Amanda Waller, Joel Kinnaman as Rick Flag, Margot Robbie as Harley Quinn, and Jai Courtney as Captain Boomerang. New additions to The Suicide Squad include Idris Elba (Luther, Thor), Alice Braga (The New Mutants), Nathan Fillion (Castle, The Rookie, Firefly), Pete Davidson (The King of Staten Island), Michael Rooker (Guardians of the Galaxy), John Cena (Bumblebee, Daddy’s Home), David Dastmalchian (The Dark Knight, Ant-Man), Sean Gunn (Guardians of the Galaxy, Gilmore Girls), Flula Borg (Pitch Perfect 2), Mayling Ng (Wonder Woman), Daniela Melchior (Valor da Vida), Peter Capaldi (Doctor Who, Paddington 2), and Juan Diego Botto (Good Behavior). There are tons of characters from the comic book world that have yet to grace us with their amazing powers on film. Some include Bloodsport, SolSoria, T.D.K, Blackguard, Savant, Ratcatcher II, Peacemaker, Polka-Dot Man, and Weasel. We were introduced to The Thinker on the CW’s The Flash and will see him portrayed by Peter Capaldi in the film. It will be exciting to see all of these characters on screen at once.

The Suicide Squad has added some diversity to the cast including Alice Braga as SolSoria and fitness champion Mayling Ng as Mongal. One new character we are thrilled to see on screen is Bloodsport, played by Idris Elba. Bloodsport is a super-villain who uses high-tech guns and weaponry with Kryptonite bullets that are teleported into his hands. As you can guess, with Kryptonite bullets, he is a major enemy of Superman. The film will also feature Bloodsport’s daughter, Tyla, played by Storm Reid (A Wrinkle in Time, Euphoria).

To prep for his role in this major comic book action film, Elba talked about his training and how he relied on past experience to get him through it.

Elba: As an adult, I did kickboxing and a little bit of boxing. When I was training for this film, because there was a lot of work that we had to do, I did a general training package which is more centered around my kickboxing training. There’s lots of circuits, cardio work, and a little bit of weight training to get those big muscles up. Essentially, working on this particular film, the work rate was so high, we were training every day on the job.

Take a look at the special behind the scenes video that was shared with fans during the panel. This film goes above and beyond for its explosions and massive destruction.

The crew is still working on The Suicide Squad, but the film is scheduled to hit theaters on August 6, 2021.