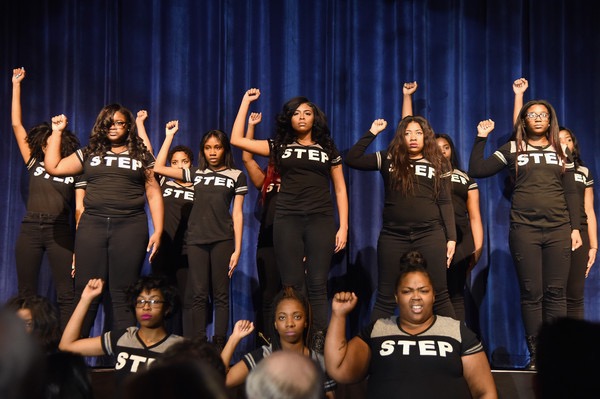 Since it’s debut at the Sundance Film Festival this year, Amanda Lipitz’s Step, a documentary following a group of young black girls trying to get into college and using step as a way to deal with the struggles they face, has seen award recognition and has recently been picked up by Fox Searchlight Pictures for worldwide distribution.

The documentary has received rave reviews and is slated to be released in theaters in August of this year and it will no doubt become a favorite because of the honest and deep meaning behind its conviction. I sometimes feel that black women are robbed of being able to express themselves – aspects of popular culture created by black girls and women are co-opted by white women and while white women receive praise for doing these things black girls get labeled as deviant, delinquent, ratchet, or ghetto for the same behavior e.g. the whole twerking debacle, the Harlem shake, hair weaves, etc.

Black women’s creativity gets bypassed. Black women’s voices are left unheard. Seriously, how is it that the ‘Cash me outside girl’ is able to do something black girls get suspended from school for and build a monetary empire from that? (Yes, I know she has a name; no, I do not care). How is it that Peaches Monroe (Kayla Newman) can come up with a word that has helped redefine coolness and not get a cent from it while other internet stars (‘Damn Daniel’ and Chewbacca Mom) have been allowed to capitalize on their 6 seconds of fame? (Peaches is crowdfunding a cosmetics line so please consider helping her out, especially if you’ve added ‘on fleek’ to your daily vocabulary).

Step’s primary focus on how these young black girls are using stepping to grow and deal with the struggles they face will give black girls and women room to take ownership of the culture they’ve created to express themselves. Seriously, the era of other people taking credit for black women’s artistic expression needs to stop. The trailer gives off a huge ‘feel good, don’t give up, you can do it’ vibe which I think is very much exactly what black girls and women need right now.

The documentary takes place in the backdrop of inner city Baltimore, Maryland and delves into the Black Lives Matter movement with gusto. The step team featured in the documentary, Lethal Ladies of Baltimore Leadership School for Young Women (LLOB), is seen performing a routine depicting the “hands up, don’t shoot” gesture and there are other instances in the trailer that show that it’s taking a no holds barred approach to showing how the movement and current political climate is affecting these black youth.

One aspect I really like about the film is its emphasis on the fact that these girls are striving to get into college and are not giving up. The girls in the film will be the first ones in their families to attend college and this alone will have a powerful impact on black girls in similar situations who watch the film. College is by no means an easy path and getting into college is no less a struggle than staying in college. Having a film that highlights the trials and tribulations of trying to get into college while dealing with all sorts of nonsense in daily life (not having enough food to eat, not having electricity) will serve as a reminder that it is very much possible to grow from dirt, sure it’s not a pretty experience, but it will all be good in the end.