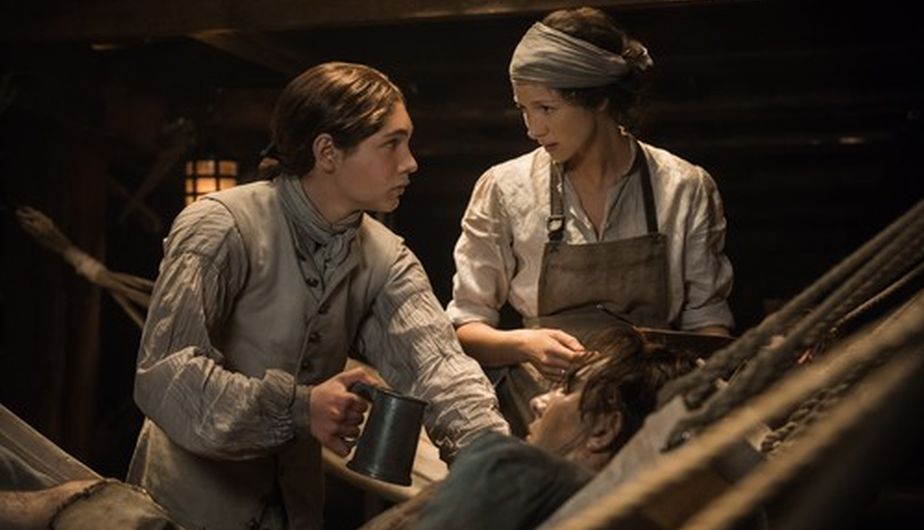 I realize that I rattled the fandom last month with my recap of Outlander 03×09. But, many of you also saw the same problems in Claire that I did, especially when it came to her disregard of her own safety by boarding the British vessel. This week, Jamie follows her down that dangerous path by challenging the captain, and getting thrown in jail, where he tries to mutiny in order to save Claire!

What happened to my Outlander of season one — where there was romance to escape to along with some nekkid backside shots of Jamie and such? Maybe the Jamaican heat will mark a return to that. I am just scared of how the show is going to handle Black folk in the coming episodes. Like I am truly going to be watching the Black folk with my head turned saying, “tell me when it’s over,” especially if the show’s treatment of POCs so far is the precedent.

That’s for next week. Let’s get into this week’s episode.

So, last week Claire ignored her audience yelling, “don’t go over there, girl!” when she decided it was her duty to board a ship full of 400 men, 18th-century men whose toxic masculinity and misogyny are at their unchecked peek. No, she and all her 20th century white privilege waltzes onto that boat. And it sails away, leaving Jamie hysterical as he tries to usurp the captain and chase the ship.

The captain must think of his ship though, and he won’t risk it for some dude and his dumbass of a wife, no matter how much money he’s getting paid to transport them. At one point, Jamie’s friends on the crew actually draw swords on the Captain, something that is not done unless there is mutiny! And crazy in love Jamie actually considers sacrificing the lives of all those men for his woman! 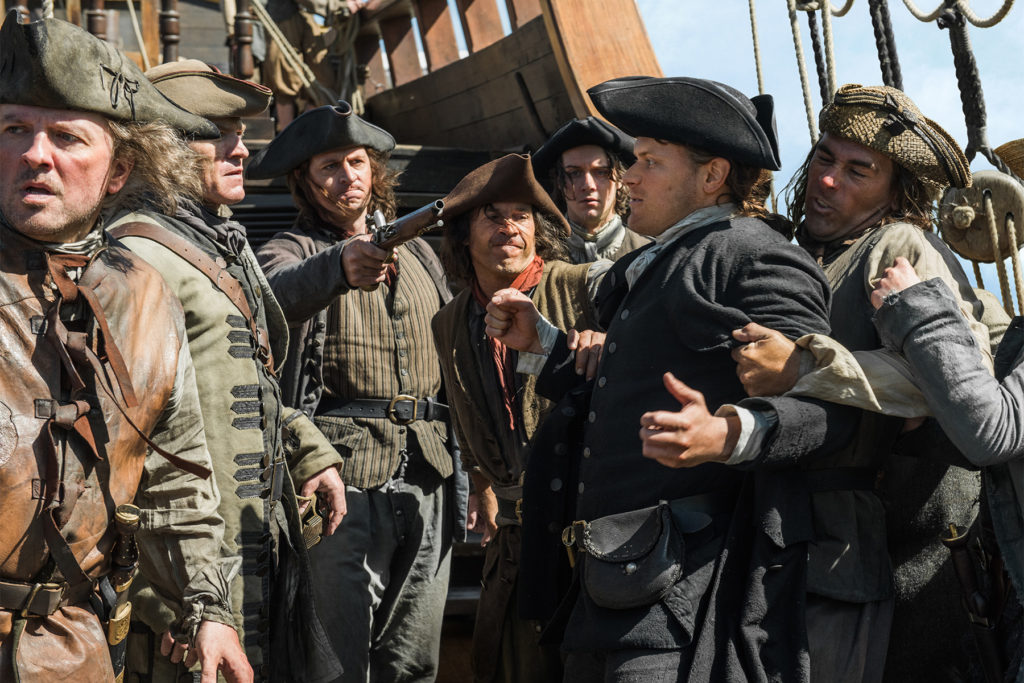 Now, I know here that some of you will argue that he’s doing it for love — probably true. However, he is from that era and in that time where survival and custom trumps everything, even love. He is constantly reminding Claire that certain boundaries she tramples over will put him in direct violation of both survival and custom, bringing danger down on them all. He is usually the one urging her to play with the system when she wants to go against it. A level-headed Jamie here would thus tell himself that he is wrong and that he must follow captain’s orders to get Claire back when they reach Jamaica. But alas, Jamie is no longer levelheaded with thoughts of 400 men taking advantage of his woman aboard the British Navy ship.

Jamie is also willing to sacrifice both of his pseudo-children to chasing Claire too. Fergus knows that mutiny is not possible. He has overheard the men, and Jamie doesn’t have as many supporters as he thinks. Furthermore, when Fergus overhears the Captain and his mates talking about Marsali’s virtue, the Frenchman knows that he has more to think about than himself aboard the ship. His talk with Jamie makes it clear that Jamie is not thinking about the welfare of anyone but Claire. Jamie is willing to burn the whole damn ship down with Fergus and Marsali in it if doing so brought Claire back to him. He has no regard for the lives of other humans around him. They regard those bodies as tools toward advancement. 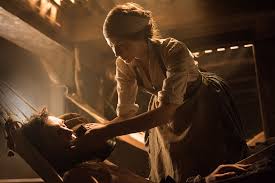 We see this on the other ship with Claire, where Claire treats Elias as her servant, never really paying enough attention to the boy to catch the symptoms of the typhoid fever when it was in its early stages. Instead, she was too busy plotting to find a man on the ship who reported Jamie to the Captain. Well, not Jamie, but Alexander Malcolm, the man who allegedly used his print shop to promote treason and illegal alcohol distribution. The man who made the complaint was actually a spy for the crown who thought his actions and lost eye (thanks to Ian) would warrant some gold and promotion. What he got was a spot in the Navy on a ship to the West Indies. Of course, after all that, seeing Jamie again made him want to snitch. But Claire’s discovery his existence, and use of a faux rape complaint to get away from the cook, was all about saving Jamie. She never once paid attention to the welfare of her friend Elias or thought about the ramifications of her threat.

When they reached the islands, Claire gets help from the goat herder, a lady who seems to understand all too well what it means to need to run away from bad men. Claire’s escape is thwarted by the Captain, who confesses that he will use her as bait to catch Jamie and take him back to England. You know that didn’t stop Claire. The next night, at the goat herder’s urging, Claire went over the side of the boat on a makeshift raft. She has to get to her man, using anyone and everyone in her way.

As this couple goes barreling across the world, using their white privilege to scheme and use anybody that gets close enough to them, I find that I am growing weary of them. It seems that when Claire and Jamie are together, they are a disaster to the world around them. Their love is the most important object and must be protected at all costs. Well, not costs to themselves, but to everyone else. At some point, you would think that one of them would stop and see the damage being done. But alas, that is not how white privilege works.

I am cringing at the thought of next week’s episode. The Black folks are coming. I just hope the Outlander showrunners make some attempt at treating them appropriately.