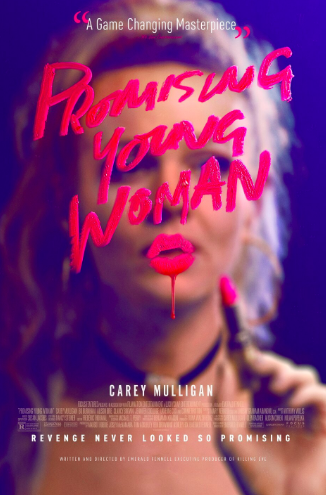 The rape revenge genre is one of the few places where a sexual assault survivor can venture to experience even just a little bit of the catharsis of justice that is habitually denied to us in real life. Yes, it’s a controversial subgenre that many criticize for its male gaze and exploitative storylines, and yet it is the miniverse where I find oceans of comfort in healing my own traumas. The rape revenge genre is the rare site where sexual assaulters actually receive repercussions as brutal as the violence they already meted out. So, imagine my surprise to have waited ages for Emerald Fennell’s much-anticipated and much-hyped rape revenge film Promising Young Woman only to find out that while it’s certainly a scathing critique on rape culture, Promising Young Woman is not actually a rape revenge tale at all.

It’s her 30th birthday, and things are not going exactly the way that Cassandra “Cassie” Thomas (Carey Mulligan) would have hoped by this milestone. As a promising young medical student along with her best friend Nina Fisher, Cassie was on the path to career and financial success until Nina was raped by a classmate, Al Monroe (Chris Lowell), and the legal and educational system decided that Al’s promising future in medicine was more important than Nina’s. After the two devastated women — Cassie had stayed home from the party where Nina was attacked and feels immense guilt — drop out of college, the movie implies Nina killed herself, and in the years since Cassie has made it her mission to hunt down predators by pretending to be a blackout drunk girl at local bars.

*Major spoilers up ahead.*

But here is where Promising Young Woman’s first bait and switch occurs: Cassie does not kill or even physically harm these would-be rapists, one of whom assaults her on screen before she reveals she’s stone cold sober. Instead, she gives them a stern talking to that shames their disgusting behavior, scaring them into admitting that they aren’t actually interested in consensual sex. More uncomfortably, the men Cassie targets are all self-proclaimed nice guys whose cognitive dissonance becomes monstrous as she calls them out for the rape they were unapologetically about to commit. After, Cassie goes home and makes an annotation in a little notebook that shows she has done this to hundreds of men by now. For viewers like me expecting an actual rape revenge movie, this is your first hint that Promising Young Woman isn’t going to deliver in any expected way, and this complicates the film on several levels.

One day at the coffee shop where Cassie very grudgingly does her job — why her boss Gail (a criminally underutilized Laverne Cox) doesn’t fire her is a mystery — she runs into an old med school classmate Ryan Cooper (Bo Burnham). Ryan is awkward and tall and cute, who not only asks her out, but mentions that their old schoolmate Al Monroe (the one who raped Cassie’s best friend) is getting married soon. Ryan also ends up dropping the names of several other classmates, many of whom were involved in the aftermath of Nina’s rape, and not in helpful ways.

Cassie retools her vigilante practice and begins planning a new set of scenarios to “avenge” Nina’s assault and death, starting with their best college friend Madison McPhee (Alison Brie), who reveals there was actually a video of the rape. Cassie gets Madison blackout drunk and arranges for a man to escort Madison to a hotel room to trick her into thinking she had been raped herself, an event that prompts Madison to bring Cassie the horrific video. “I don’t know how we could have watched that and thought it was funny,” Madison says, the closest she comes to an apology. Thankfully for the audience, the video of Nina’s assault remains off screen and we experience the event through Cassie’s expressions only. Cassie also sees her new boyfriend Ryan on the tape, laughing and doing nothing to help. Betrayal goes deep in Promising Young Woman.

Cassie goes on to terrorize university Dean Walker (Connie Britton) after Dean Walker spouts venom like, “We have to give these boys the benefit of the doubt,” and, “We can’t ruin a young man’s life over accusations,” as well as confront the lawyer Mr. Green (Alfred Molina) who harassed Nina into silence. Casting Tami Taylor actress Britton as this evil poster woman for the patriarchy was a brilliant move on Fennell’s part, akin to casting beloved Doctor Who actor David Tennant as a rapist on Jessica Jones.

All of Cassie’s plans culminate at Al Monroe’s bachelor party where Cassie pretends to be the stripper, roofies the attendees, and is just about to carve Nina’s name into Al’s flesh like a female Dexter when he overpowers her and smothers her to death. This is the grand finale of the film’s framing Cassie as a kind of religious martyr, subsequently burned on a funeral pyre by powerful men. Cassie having planned for different outcomes, her disappearance prompts the video of the rape to be released. Promising Young Woman ends with Al Monroe’s arrest at his wedding while the guests, including Ryan, look on in horror.

There is so much that Promising Young Woman gets right about rape culture and rapists in general. We see men get away with life-destroying crimes even when the evidence is on tape and there were witnesses. We see how some men don’t actually want to have sex with a willing partner; they want a living sex doll with no voice or agency or desire. We see how dangerous it can be for a woman to be alone with just one man, let alone a hyena pack of them. Promising Young Woman also explores the limitations of revenge, that in real life Cassie, or any of us survivors, can’t actually retaliate against the guys who have assaulted us because women are subject to consequences, not men. Real-life revenge is messy and doesn’t play out as in stories. This is all true to life.

However, Promising Young Woman’s problematic ending, that somehow magically the legal system which, up until then, had failed both Nina and Cassie would now offer actual justice, is sadly laughable, along with the fact that cops would never bust up a rich white person’s wedding to arrest an alleged rapist. If the film wanted to be really real, Al would have killed Cassie and simply gotten away with it. In fact, it’s hard to imagine that Cassie could have tricked so many men with her drunk girl routine from the start and got away unscathed. In real life men often respond with (extreme) violence when a woman denies or dupes them; they wouldn’t quake in their boots as they do in Promising Young Woman.

Worse, because the film was marketed as a rape revenge, that is the kind of narrative I had emotionally calibrated my survivor self to experience. Instead, I looked on in a different kind of horror as the supposed avenger almost got raped several times, got smothered in a grotesque 2.5-minute murder scene that felt a nauseating hour long, and then was burned to death in the woods as if she was nothing more than an inconvenient pile of trash with skin. None of this is rape revenge. It’s just rape, murder, and my crushing disappointment at the lost opportunity for a woman to offer a new rape revenge narrative like Coralie Fargeat’s Revenge or Natalia Leite’s M.F.A. that could offer a dark kind of solace to survivors, not retraumatize us.

Promising Young Woman ended on neither a cathartic or righteous note. I was left with the sick feeling that I live with daily that there is no justice for the majority of rape survivors, and in this case not even briefly on screen. Promising Young Woman has a pink bubblegum 2000s aesthetic that I couldn’t make sense of in the movie’s context until its twisted ending: the film itself is saccharine, there’s no temporary antidote or reprieve for a rape survivors’ pain and rage to be found here. I’m unsure what audiences this movie was actually made for, but I am sure it wasn’t for folks like me.

A Chat with Angie Wells, Makeup Department Head of the Film for ‘Promising Young Woman’