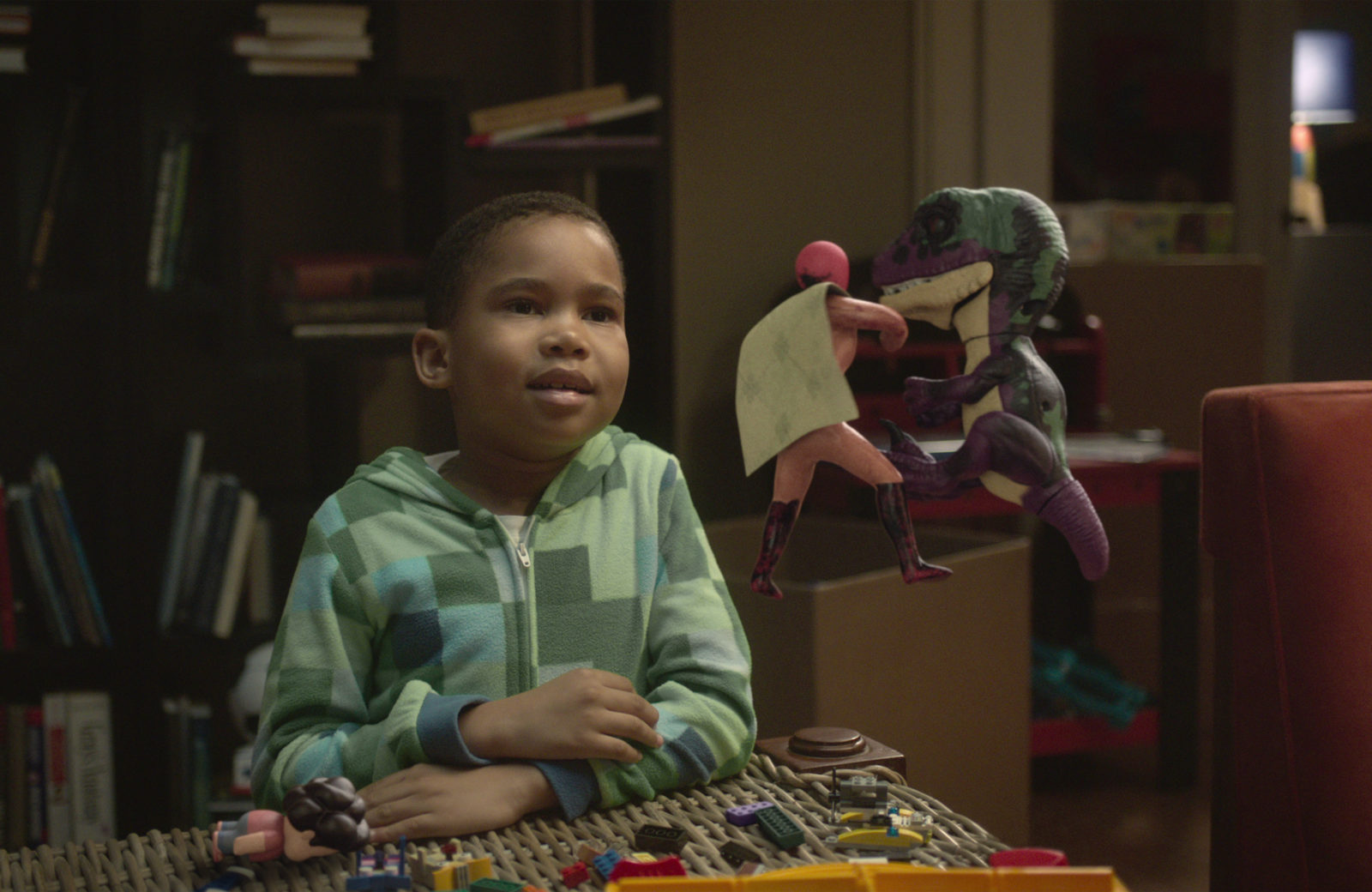 In this week’s recap of Raising Dion, we review episode 2 also known as issue #102: “Fortress of Solitude”.

After the shocking presence of Mark in episode 1, Nicole and Dion are both in tears for the man they have lost and came back briefly to warn them. Nicole searches for answers but ponders over Charlotte, the woman Mark saved, then decides to call and leaves a message for Charlotte. No good can come from that. A knock at the cabin door, has us all on the edge because it is the local Sherriff asking questions about a missing woman at the lake. All of it is creepy and dodgy.

Nicole in a panic calls Pat to ask what he knows about this Charlotte woman and her husband Mark. She continues to push Pat away as all he tries to do is help her through the pain. Dion wants to go back to school instead of hanging out with his mom, but Nicole won’t let him until he has all of his powers in check. All of the yoga in the world won’t help the mind of a second-grader. While chasing a squirrel we come across another one of Dion’s powers as he somehow ends up on a tree branch. Dion has an asthma attack, clearly scared, while Nicole searches for a ladder.

A job opportunity pops up for Nicole which prompts them to go back to the city but not before Dion leaves a note for Mark. Probably not the best idea but oh well… Quick switch over to Pat conducting facial recognition search on Charlotte and attempting to get a better job position for himself, awkwardly. Nicole goes to her job interview at the hospital where Kat aka Auntie Kat to Dion, works. Kat continues to have doubts about Nicole. During the interview, Dion plays video games with Pat and asks questions about secret identities and mentors. Nicole does her best through the interview but is distracted by Dion being a kid. Where is Kat during this time? Sister girl needs help keeping her kid on the ground at all times! Literally. As Dion floats in a chair, Nicole rushes out during the interview. I’m frustrated for her but we know this isn’t the job for her.

Kat calls Pat to get intel on Nicole and is starting to annoy me. Pat even points out that Kat needs to work on her people skills. I agree. While Nicole is babyproofing her apartment, the superintendent George interrupts thus creating a moment for her to meet a neighbor, Tessa, down the hall whose son, Malik, helps Nicole with George. Pat calls Nicole up with little information on Charlotte who apparently disappeared off the face of the earth the day Mark dies. Suspicious as hell. Who is this woman? Esperanza pops up with Dion’s homework and to hang out with Dion who has got a new superhero name: Mind Mover.

Pat pops up with Chinese food and dessert but we get the tea on the rocky relationship between Nicole and Pat. Why does everyone treat Nicole like she is a train wreck? Pat gives an emotional explanation of why he hangs around and Nicole seems to turn around. Dion, I mean Mind Mover, is watching bad guys through his bedroom window and tries his best to help a little girl that has dropped her bunny but ends up in the middle of the street. Not far from where Nicole and Pat are talking… then nearly gets ran over by a car but pops into Nicole’s arms… In front of Pat. We all knew they couldn’t keep this from Pat.

The beginning of the show hurts my heart. Hearing Dion cry and call out for his dad was too painful. Baby boy really needs his dad. Now, I’m a bit concerned with Nicole calling Charlotte, but at least Pat is jumping in to help. Nicole has her hands full and doesn’t seem to get that she can’t do everything. I’ll admit that Kat irks me. She has a lot of doubts about Nicole’s skills and yeah, I know I don’t know all their history but family shouldn’t be an obstacle when you are going through hard times. They should help. I can understand as to why there is friction between Pat and Nicole, calling someone a flake and not apologizing isn’t a good thing at all.

Dion is a kid of his own mind. I think he struggles with staying focused like every other kid of this generation. I’ve worked with kids from ages 6 to 18 and they all struggle with it. Watching Nicole watching Dion during a job interview, was cringeworthy. I knew she shouldn’t take the job the moment they said late nights and weekends are a strong possibility. Not with Dion’s powers reacting to what he wants. You can’t control what a kid wants. With Pat knowing, Nicole doesn’t have to deal with this alone. Did anyone else hear the magical music is similar to those heard in the Harry Potter movies? Just me?

Stay tuned for the recap of Episode 3: ISSUE #103: Watch Man