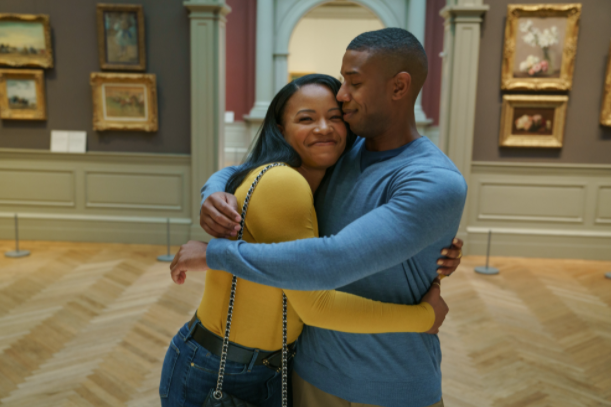 A Journal for Jordan is a sentimental and stirring journey based on the life of journalist/author Dana Canedy (Chante Adams), her son Jordan Monroe King (Jalon Christian), and his father 1st Sergeant Charles Monroe King (Michael B. Jordan). It’s a meandering, yet thought-provoking film that has its share of issues, but overall skillfully strums on the heartstrings.

The Sony pictures production is an adaptation of Canedy’s memoir, A Journal for Jordan: A Story of Love and Honor. In the film, we travel through multiple different timelines to witness the love between Charles and Dana seed, grow, and continue to flourish despite the changing seasons.

There’s an immediate attraction between Charles and Dana, and we see her family encourage the setup. There’s a hitch, though; Charles is a military man and so is Dana’s father. Unfortunately, Dana’s experience with having a philandering dad included him often returning to base to meet up with other women. Yet her mother stayed faithfully by his side. Her sister calls it love, but Dana calls it fear. She’s desperate not to follow in her mother’s footsteps. This is one of the reasons falling for Charles is so hard. Adams does a marvelous job of showing the vulnerabilities in the walls she puts up. She’s relatable, and you can understand her hesitation and ongoing annoyance. How dare she fall in love with this man who represents everything she’s been trying to avoid?

Charles is sweet and respectful, but he comes with baggage that’s more than just an ex-wife and a daughter. He says he would never be with another woman, but it’s clear his first love — the Army — will always take precedence over Dana. The Army and the love for his country provide Charles with a sense of self-worth, but also with an escape from the terrors of human love. It’s an interesting and subtle paradox that rears its head several times during the film. Charles appears bold and stringent in the face of the men who serve under him, but soon we see that life betray him. He still remains loyal, though there’s something else there — a kind of pain, disappointment, or even a realization that his safe space was never really safe.

A Journal for Jordan is a hard movie to be objective about. During the film, a question is asked of a character about why we engaged in war after 9/11. The character explains there are two trains of thought: one that claims we were there protecting a nation from terrorists, and another that claims we were the ones who bore the terrorism in the first place. This is a line in the sand that is unavoidable, and we see Dana walk it with as much grace as you can expect from someone who clearly has unresolved trauma.

However, as an audience, this line is truly crucial to how you ingest the film. Are the ends justified? Even when Jordan is in the womb, Charles calls the baby his little soldier and jokes that he’ll wait until the boy is 18 to take him to a recruitment center. Dana laughs and shakes her head no, but the track is laid and it’s frankly terrifying watching it play out. Dana never wanted a military man, and now her fiance is planning for a legacy of kings defending their country at every cost.

For myself, there was a sheen of dread that lay simmering in the undertones of the film. It didn’t make the film less enjoyable, but it caused me to think about the thematic elements more deeply. This is not a rom-com. While there are triumphant moments, it’s not really uplifting. What the film does is offer a glimpse into the lives of a couple whose love for each other was usurped by one person’s love for his country. It doesn’t seek to answer whether that’s right or wrong but instead deals with the peaks and valleys of the aftermath.

A Journal for Jordan focuses on the titular journal given to Charles by Dana. She tells him to tell their son who Charles is and what he believes. Unsaid is the sobering thought that there’s a great chance Charles won’t be around to tell Jordan himself. Charles fills the journal with life advice and things he’s learned during his journey. Jordan becomes enamored with the journal, paying special attention to the entries on physical fitness and what it is to be a man. He’s light-skinned (a trait passed from Charles’s mother) and has light eyes and begins to get bullied at school. It’s through the journal that he finds safety and confidence.

Christian delivers a solid performance as Jordan and hits the emotional beats well. He’s not on screen for long, but he carries a heavy role with a lot of grace. The screenplay by Virgil Williams is a nice companion to the directing style of Denzel Washington. There’s a definite Spike Lee influence, but Washington has curated a style all of his own. It shines within the stolen moments of the film. The comedic relief is shown in quiet asides and sideways glances. There are stunning vignettes of statues and other static objects that permeate the heart with metaphor and double meaning. Washington doesn’t think less of his audience. He expects us to understand the significance of every shot and, if we don’t understand, to at least appreciate the surface beauty.

There’s a level of respect given to the actors, particularly Adams, who is a stunning woman. There’s a scene where we start at her ankle and travel all the way up to her thigh and then her torso and then her face as she lounges. It could be seen as exploitative, but it served to show the beauty she holds to Charles. The way he thinks of her during the parts of their relationship that are spent — the majority of the time — on the phone. Washington does a wonderful job of showing the longing between the two as they drift through their unconventional relationship. The film is long and you can feel it, but this is in order for the audience to feel immersed in the story, which is ultimately successful.

Overall A Journal for Jordan is a lovely film that is perfect for the holiday season when we reflect on the things that matter most and the people we hold in our hearts.

A Journal for Jordan will open in theaters December 25, 2021.