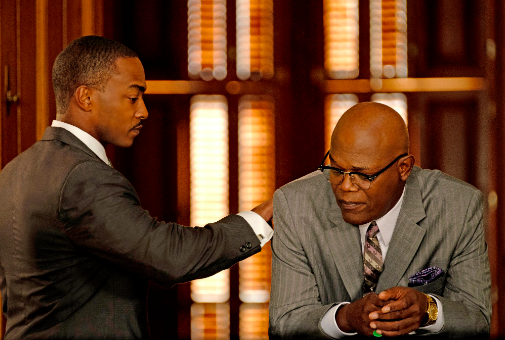 It’s no coincidence that Avengers alumni Anthony Mackie and Samuel L. Jackson tag team as superheroes in The Banker.

This revolutionary true story directed by George Nolfi, tells the tale of two audacious businessmen helping the Black working class live the American dream. Bernard Garrett (Anthony Mackie) is an ambitious young man who has dreams of wealth and entrepreneurship during a period in American history where African Americans were treated like second class citizens. One could argue that still exists today, but during these times, a man like Bernard Garrett could not walk into a bank and ask for a loan because of the color of his skin, no matter how much wealth he had amassed.

Not to mention the setting of this story takes place in the deep heart of Texas, making this journey all the more challenging for Garrett’s dream of entrepreneurship to come to fruition during an era that upheld strict Jim Crow laws. However, not all is lost for Garrett when he meets an Irishman by the name of Patrick Barker (Colm Meaney). The property land owner is impressed with Garrett’s ambition and due diligence. He inevitably decides to partner with him, and the two split a 50/50 deal to purchase low-cost properties in white neighborhoods and sell to Black tenants. This deal for Garrett becomes advantageous for him two-fold: he earns an income as a real estate owner and he’s developing communities for Black residents in safer neighborhoods — moving them out of the ghettos and crime-infested areas they were forced to dwell in before.

Unfortunately, this partnership with Barker doesn’t last long due to his sudden passing. His widow is not all interested in sharing Barker’s half of their investment deal. What makes this story so compelling is that Garrett, much like entrepreneur Madam C.J. Walker, doesn’t let that stop him from his dream. Garrett instead works with a charismatic man by the name of Joe Morris (Samuel L. Jackson). Joe is not exactly the kind of guy you would expect to be a financial investor. He’s an alcoholic, has a wandering eye with women, and has absolutely no scruples. However, he’s clever and he understands the game. He is so guarded that he trusts no one, which is probably the one person you should look into doing business with.

Garrett and Morris concoct a risky plan to train a working-class white man, Matt Steiner (Nicholas Hoult) to pose as the rich and privileged face of their burgeoning real estate and banking empire — while Garrett and Morris pose as a janitor and a chauffeur. With the help of Garrett’s wife Eunice (Nia Long) to help train Matt dinner etiquette and more, the team pulls off the scheme of the century — to purchase one of the largest banks in Texas. The film gives off the vibes of a heist film at times and a comedy at others. Mackie and Jackson have their moments of humorous exchanges and not to mention pretty awesome chemistry that pulls you in to each and every one of their scenes. The pacing of this film never throws you off track. You stay engaged throughout because the plot is so methodical and precise. As a viewer, you anticipate what will happen next and what could possibly go wrong with such a dicey strategy. There’s also the complexity of Steiner, who seems trustworthy at first glance, but as he is trained and builds his skills from beginner to novice to expert, his ego gets the best of him and that trust is slowly compromised.

The Banker definitely is a character-driven story in how money, greed, and ego can change the dynamic of a relationship and also, sadly, how race creates unjust circumstances in a court of law and the truth means absolutely nothing if you are the wrong color.

The Banker is currently available for streaming on Apple TV+