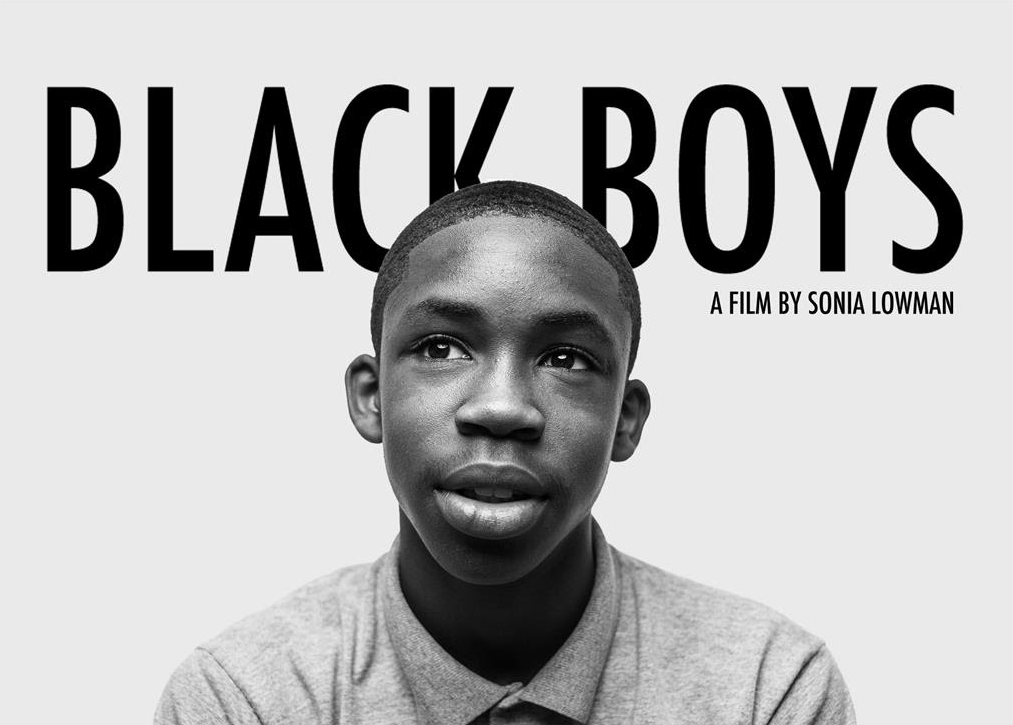 BLACK BOYS begins with former football player Greg Scruggs reading a story and laughing with his baby boy before bedtime. Witnessing the simple act of a father bonding with his son is a beautiful reality of Black maleness we need to see more of in our society. Whenever a story instantly draws me in and makes me fall in love with the people on screen, I prepare myself for some heartbreak ahead. BLACK BOYS is an earnest, full-hearted documentary that succinctly observes the challenges Black men and boys face while revealing how the negative impact of systemic injustice lives in the body, mind, voice, and hearts of Black boys and men. However, it misses the mark when it takes on too many storylines.

BLACK BOYS is at its best during the interview segments. Director Sonia Lowman’s keen eye builds a compelling structure throughout the film as she invites her subjects to share the challenges and traumas of living in a country that seems to loathe Black folks. Lowman divides the film into four separate sections, Body, Mind, Voice, and Heart, giving the documentary an easy-to-follow structure.

The first section of the film Body stands out as it unflinchingly examines America’s four hundred and one-year dependence on using Black bodies to generate revenue. Sports expert Jemele Hill Key (Jemele Hill Is Unbothered podcast host and The Atlantic contributor) skillfully unpacks the history of ownership of Black bodies and its connection to sports. As soon as enslaved Africans got stolen to work this stolen land, slave-owners forced Black men to compete in sports for entertainment and profit. Images of enslaved Black men being scrutinized on the slave auction block crossfade into images of Black college football players being scrutinized for the NFL Combine. Former NFL players share how demoralizing the process of being stripped to their shorts, measured, weighed, and paraded down a kind of catwalk for NFL owners (who are all white) to examine before deciding which players to sign.

Howard Bryant (ESPN contributor, Author/Journalist) reflects: “The Black Athlete is the most visible, most important, most influential Black employee this country has ever produced.”  Sonia Lowman moves the story to a wider lens that shows how and why low wealth Black families encourage their sons to excel in football and basketball with the hopes of being saved by talent even though less than 1% of these kids will land high paying jobs as athletes. Athletes Carmelo Anthony, Chris Carter, and Malcolm Jenkins give powerful insights from the perspective of Black men who have realized their childhood dreams of playing professional sports and still have to deal with the toxic impact of systemic racism. The documentary would have been much stronger if it had focused on this section of the film.

BLACK BOYS does so much so well. The interviews with the boys and men give the audience a deep perspective into the challenges Black boys face every day they step out of their family’s homes.  Stand-out scenes are the groups of Black boys and men who courageously share their experiences with racism with a vulnerability that simultaneously touched my heart and filled me with rage.

Another unsettling scene was when writer/director Sonia Lowman, who is a white woman, was interviewing a bi-racial Black boy about white women being afraid of him. Lowman chooses to show herself on camera as the boy breaks down because white women in the world who don’t know him, fear him. Placing this vulnerable young man in the situation of having a loving white mom at home, and processing being feared by white women who don’t know he has a white mother in real-time on camera as the filmmaker centers herself in his story. That felt gross and manipulative. Once Lowman placed herself on screen, the film’s tone felt different to me. I no longer trusted the filmmakers and felt concerned that the Black people on screen were being treated as if they were subjects of some 21st century National Geographic film about  “the challenged Black boy” in his “native” environment. From that moment on, the film amplified the tribulations Black boys and men face in ways that were so triggering that I was too exhausted to buy into the positive ending the filmmakers attempted to achieve.

BLACK BOYS starts as this wonderful homage to the humanity of Black boys, but through the process of telling the story through the white female gaze, I realized that this film wasn’t made for a Black audience. This film intends to educate white people by sharing the vulnerability of Black boys. What BLACK BOYS does is show the impact of the fear and ignorance of white dominance on Black children in real-time and gives white folks a silent call to action to see Black boys as children, and Black men as vulnerable human beings instead of seeing them as the origin of their fear.

The production company, Never Whisper Justice Films, has a partnership with Old Spice, and the film was at Brand Storytelling 2022, a sanctioned event of the Sundance film festival last week. The partnership also created a digital learning course available in schools nationwide. BLACK BOYS is a powerful film with beautiful elements used as a tool for discussion and the education of white folks in America. If you’re someone who is not in a relationship or a community with Black folks and are looking to raise awareness about the plight of some Black boys in American society, this film is for you. But if you’re someone who is fully aware of these issues or are a Black person and living your life and raising Black children and caring for your community, don’t waste your time getting triggered by this film. Use the time to do some self-care and take a nap.