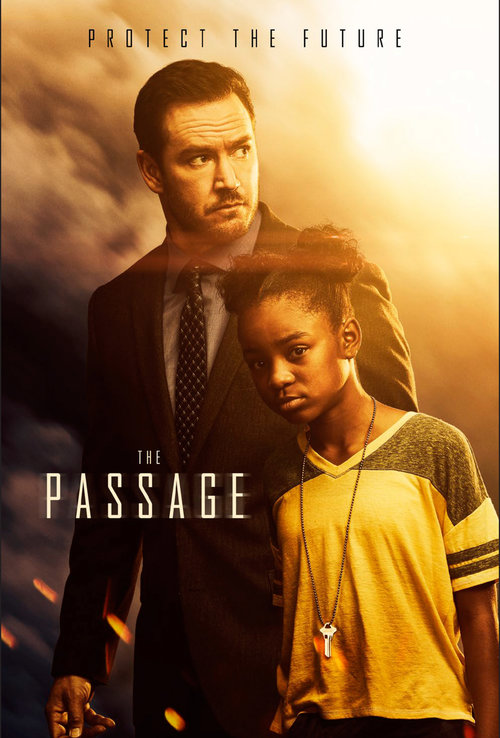 If you haven’t watched Fox’s new series, The Passage, then you need to catch up. It is the only show that has collected the national conversation on the treatment of Black girls and poured it into a sci-fi drama. I doubt that the writers Liz Heldens (who also created the series) and Justin Cronin set out to do it that way, but that result is what matters. The Passage works to combine the social commentary with a fictional narrative (based on the books by Cronin) to create an epic Monday night experience, and we are here for it.

The Black Girl in the Middle

In 2017, the Georgetown Law Center on Poverty and Inequality published a study that shocked the Americans who were not Black girls. The “Girlhood Interrupted: The Erasure of Black Girls” put the nation on notice with its findings. Black girls are perceived as much less innocent than white girls, a phenomenon that begins when the girls are as young as 5 years old. The girls were over-sexualized, falsely accused, and adultified. In other words, they were not “seen” as little girls by age 10, the age of the Black girl at the center of the show.

Amy (Saniyya Sidney), the girl at the center of Fox’s new show The Passage, is the girl that perfectly exemplifies the study. We are introduced to her getting in trouble at school, but a closer look shows that she may be defending herself. Later, Amy is in a diner until closing time — around 10 or 11 at night for the average diner — and no one thinks to call social services, the police, or to ask where she lives. No one thinks to protect his girl. A waitress (a Black woman) does ask if Amy’s mother knows where she is, but that’s only because the diner is closing and the waitress needs to get the girl gone somewhere. Even amongst Black women, Black girls are seen as mature enough to protect themselves. Like they don’t need any intervention.

As we later see, people who should be protecting Amy are constantly failing and leaving her vulnerable to predators. The social worker places her in a home the is overpopulated and not suited for a girl who just lost her mother. A 10-year-old girl who lost her mother should have been more closely watched and at the very least deserves some therapeutic treatment. Instead, she is tossed into a home with a lackadaisical caregiver who does not bat an eye when agents come to take Amy away.

Value for All the Wrong Reasons

Amy is needed to help complete an experiment that has been going on for quite some time. Project Noah is designed by Dr. Tim Fanning (Jamie McShane) and Dr. Jonas Lear (Henry Ian Cusick) to find a cure for all human disease. Along the way, Dr. Faninng is infected with a new pathogen, one that turns humans into some vampiric creature. That creature is immune to all human disease. The team is later tasked with finding a way to make the cure much less…monstrous. The solution is to find a kid. The child’s body could synthesize the virus so that the vampiric parts are killed and the benefits (killing all human disease) remain.

So, Brad (Mark-Paul Gosselaar) one of the agents tasked with retrieving subjects for the experiments, gets the assignment to secure Amy. The moment that her mother dies, she is on their radar as a child with no family and no home. Brad goes along with the retrieval but has his doubts. Before this assignment, he was securing inmates from death row. Now they want a girl? Brad has objections, but we need to think about one key trait that he has introduced to the narrative. Brad sees Amy as a little girl.

A Valued Body, or A Little Girl

Dr. Nichole Sykes, played by Caroline Chikezie, is the one who sends Brad out after Amy. Brad questions the task but does what he is told, assured by Dr. Sykes and others that Amy is okay and will be benefiting all of humanity. But, Brad has a gut feeling that something is off. After seeing his partner abuse Amy to snatch her (the man hits the girl like she is one of the adult inmates), and hearing the way that the rest of the scientist refer to her (as a body, a specimen for the experiment), Brad decides that Amy must be protected.

Brad is the only person, so far who can and does see Amy as a little girl. Dr. Sykes, a Black woman does acknowledge Amy’s girlhood but refuses to see it. She can’t. Seeing Amy as more than a specimen will put the project in jeopardy. (I have a feeling that this may actually become the source of a plot twist as the season progresses.) Brad is not attached to the project or the job in that way, so he does not have to ignore Amy’s girlhood.

Brad sees that she is car sick and sends the other agent for remedies. He sees that she is scared and takes a detour to a carnival. He gives the other agent a bloody nose for hitting Amy when she tried to run away. He treats her like a child and expects others in her presence to do the same. When they do not, he takes Amy and he runs. Someone has to protect her — someone to protect the little girl that everyone wants to turn into a monster.

A Show About the Monsters We All Are to Black Girls

Fox has succeeded in creating a visual depiction of a truth that was recently proven by a formal study. It’s a truth that Black women know all too well, and Black parents fight all the time. America does not acknowledge the girlhood of Black girls. As a result, they are ignored and left unprotected. They are abused and their bodies used. When people fail to recognize the girlhood in a 10-year-old, it’s easier to see her as a body whose only value is in experimentation.

By making a white man the only person who can see the Black girl’s girlhood, the show forces audiences to delve into some raw feelings that so many have about race relations. It also challenges us to reexamine our definitions of duty and even family. While this is only one part of the storyline in The Passage, it is a very important one worth exploring. And it brings up some questions that have a large bearing on the plot. What makes Brad the only person who can truly see the girl? Will whatever that is fade away, blinding Amy’s only protector and making him like everyone else? Will Brad become compromised, leaving Amy unprotected? Will Dr. Sykes tap her own girlhood and become an ally?

These are questions for the next episodes. For now, social commentary woven into the series is something that I hope we get to discuss further.

The Passage airs Mondays at 8 on Fox. You can stream the pilot episode on Hulu, On Demand, and Fox Now.