Who are the real trespassers?

The film Trespassers presents the audience with a little bit of an obvious answer to this question; what the film lacks in depth and character development it attempts to make it up with an interesting psychological question. How far into someone’s life can we go into before we can say we are trespassing?

Underneath a veneer of a flawless weekend getaway — a group of four friends unwind and heal from the stresses of life. It would seem perfect enough for anyone to get a little closer to their mate and to get out of their natural habitat. This picture-perfect weekend, however, is disrupted with multiple interruptions that have ranged from emotional torture to physical endangerment.

The director, Orson Oblowitz, plays around with many horror clichés. This on the surface might seem to obstruct from the message of the film, but instead, its formulaic story with its obvious horror twists allow the audience to see past the blood and gore, and into the narrative. The formula allows viewers to know, if not exactly what, but something along the lines of pain and suffering is coming. This, in turn, allows the audience to see the brilliance of psychology at play in the narrative.

The two leads Joseph (Zach Avery) and Sara (Angela Trimbur) are attempting to recover from a loss they have both suffered. One that has damaged their relationship in a way that cannot be forgotten. The planned vacation takes place in a beautiful desert oasis. A lovely home with luxuries, for example, a hot tub, beautiful hanging art, and a dark room to develop photos in. The home seems flawless. The couple is joined by their friends Estelle (Jane Parrish) and Victor (Jonathan Howard). Estelle is a sweet person if sometimes oversexualized, and Victor is opinionated in the strongest sense of the word. These two groups of friends attempt to decompress from their lives and start anew. Unfortunately, they are unaware of how their seamless transition to this remote location will reveal their inner truths, and some will prove to be more harmful than others.

The film builds suspense with its unnamed characters. An element that is overused but underhyped for this particular film. One of the unnamed characters is referred to as the Visitor (Fairuza Balk) who is the obvious trespasser of the film. The Visitor comes unexpectedly knocking on the door late at night, in true horror fashion of course. She is a classic textbook definition of an unsuspecting character. The Visitor’s physical appearance is not threatening so it allows the other characters to let their guard down. Her short stature, homely appearance, meek and kind nature blend together so well that all characters have the wool pulled over their eyes, but that cannot last forever. 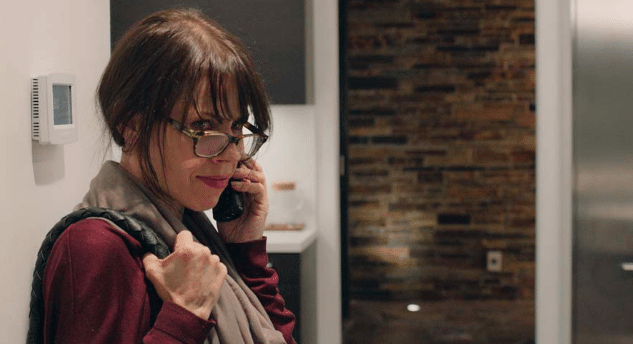 Soon after the Visitor is welcomed into the house, Victor starts to become uneasy. His attitude towards her was already negative, and her staying longer than expected only exacerbates the situation further. Balk’s character claimed before entering that she knows the owners of the house. Once she is allowed to roam the house, she comes across a picture of a Native American and tells a story of their belief to Estelle. The Visitor’s surprised expression at the beautiful snapshot makes Estelle a little doubtful of her. The Visitor’s ability to be both knowledgeable and carefree provides an interesting dichotomy.

She is able to both be a stranger in the house, but simultaneously also be familiar with the home and the personalities that dwell within it. No one is safe from her perceptive nature. Her character presents a brilliant performance of the unexpected possessing great trouble. This is to be expected from Balk’s previous performances, most notably her performance in The Craft. In The Craft Nancy (Fairuza Balk) has an inner darkness that comes out and creeps the other characters out at the most ideal time.

The Visitor soon rouses suspicion from the other characters. They probe with questions like where is the tow-truck? Have you made your calls, and questions about the people who owned the house? Her answers and the method in which she answers them parallel her talent. Balk consistently remains both an enigma and truthteller. Balk’s acting presents a model that proves to be timeless. An innocent, kind persona that hides a dark secret from the public.

While the Visitor might be seen as a trespasser, there are many other characters who also invade, defile, and even adulterate. These are not always so clear as the main antagonists may be a bit understanding of how individuals define trespasser will make the film more of a psychological thriller.

Despite the film’s deficiencies, there are a lot of positive aspects to Trespassers. The cinematography is well crafted with little to no distractions. The vivid colors and music set the mood of the film and creates an inviting experience. The film might not be a mainstream hit, but it is not a bad B list film for a night in.