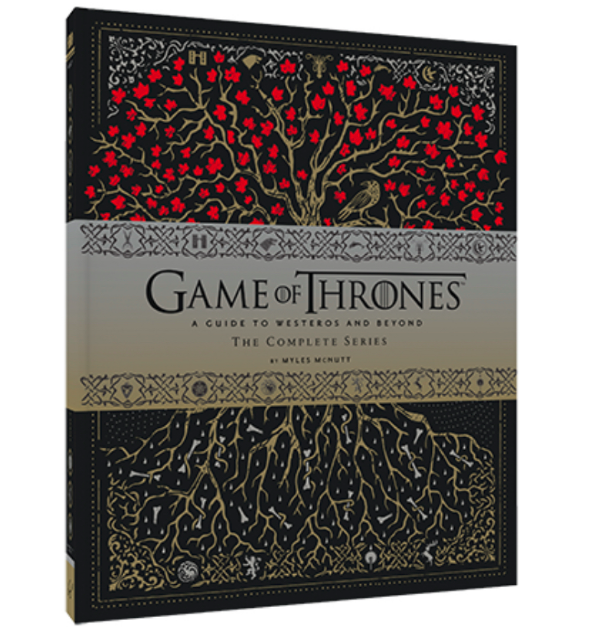 Suffering through the Long Night that is dark and full of terrors without Game of Thrones?

No worries, we got you covered. Game of Thrones: A Guide to Westeros and Beyond, The Complete Series is the perfect addition to any GoT super fan’s collection. For eight seasons, we have followed the Great Houses of Westeros as they fought for power and the Iron Throne. Lavishly illustrated, this wonderful companion piece celebrates the complete Emmy-winning series from beginning to end.

The book is comprised of two parts. We begin in the South and Essos and end in the North and Beyond the Wall. It is a literal feast for the eyes, complete with character profiles, battle depictions, and those handy family trees (between the dating habits of the Lannisters and the Targaryens, it’s hard to keep everything straight).

In the South, Robert Baratheon sits on the Iron Throne, but across the Narrow Sea in Essos whispers of the remains of the Targaryen dynasty still persist. Unbeknownst to Robert, it is Daenerys Targaryen who plots to usurp his throne and not her older brother, Viserys. In his own household, Robert contends with the likes of his wife Cersei Lannister and her brother and secret lover Jamie. Your first look into this world is a breathtaking map of Westeros, the South colored blood red — perhaps it’s a sign of things to come and all the lives lost vying for the Iron Throne. To quote our favorite Mad Queen, the throne will be reclaimed through “fire and blood.”

To understand this strange world and all its players, the show cleverly laid out its world-building in the opening credits. The iconic theme song plays as the viewer is taken on a journey across the world. Overlooking Westeros is the astrolabe. Fans of the show will be delighted to discover that this companion book beautifully illustrates the astrolabe and provides insight into the various scenes depicted. Ever wonder about the symbolism of a dragon fighting off a pack of Direwolves? This book has you covered.

Part I dives into the character profiles of our favorite and most hated players of the South and Essos. We learn of Robert’s Rebellion and “kidnapping” of Lyanna Stark — the spark that started the Rebellion and eventually brought down the Targaryen dynasty. We learn of Robert’s glory days, a far cry from the drunken king portrayed on screen. Perhaps my favorite character profile is that of Robert’s Queen Cersei Lannister and her siblings Tyrion and Jamie. The book has a chart comparing who drank more wine throughout the series, Cersei or Tyrion? It’s safe to say that despite his short stature, Tyrion drunk Cersei under the table.

Ever wondered about the ins and outs of King’s Landing? The book illustrates a detailed map of the city along with a description of the Red Keep, the Great Sept of Baelor, Flea Bottom, the oft forgotten Hills, and the notorious Dragon Pit. Music is a central part of the South. A Guide to Westeros and Beyond breaks down iconic songs such as “The Rains of Castamere” and “The Bear and the Maiden Fair.” “‘And who are you,’ the proud lord said, ‘that I must bow so low?’” will forever be my favorite line. Thanks to the book we know exactly what became of the proud lord and how Tywin Lannister crushed his house.

Speaking of proud leaders, let’s head across the Narrow Sea to the stomping grounds of the Mother of Dragons, Daenerys Targaryen. We first meet her in the city of Pentos, and we last see her in King’s Landing dying in the arms of her lover and nephew Jon Snow (we’ll get to him later). Daenerys is probably one of the most traveled characters on the show. Her journey is wonderfully illustrated from beginning to end in A Guide to Westeros. From her time in the Dothraki grasslands riding horseback alongside her husband Khal Drogo to her despair through the Red Waste to her triumphant return to Dragonstone and her valiant fight against the Army of the Dead in the North to her tragic end in the Red Keep, we are treated to the journey of our beloved Khalessi. Along the way, she met her closest advisors Jorah Mormont, Grey Worm, Missandei of Naath (Long may her curls pop!), Daario Naharis, and Lord Varys. Each of her advisors and friends has their own character profiles but my favorites of all are those of her children, the dragons. Long has the Three-Headed Dragon been the symbol of the Targaryen household. Despite the fact that they were thought to have died out, Daenerys gave “birth” to three dragons. Their names were Drogon, Viserion, and Rhaegal. A Guide to Westeros describes the dragons in great detail, down to their coloring, size, and their riders. “Dracarys,” indeed.

In Part II of A Guide to Westeros, we travel further north to the domain of the Starks of Winterfell. If you were to ask me which house I’d belong to, I am Team Stark all the way. Between their patriarch Ned Stark, free-spirited Arya Stark, and somber Jon Snow, there was so much to love. Perhaps almost as iconic as the Starks are their swords: Ice, Longclaw, and Needle. A Guide to Westeros does an amazing job of illustrating the Greats Sword of Westeros and Essos along with their history and owners. Despite his untimely demise by the sharp blade of Ice, Ned Stark’s presence is felt throughout the series. His ghost never quite left our minds or our hearts. The profile of the Warden of the North along with a layout of his home and large family is highlighted in A Guide to Westeros. We are reintroduced to sweet demure Sansa, precocious young Bran, mischievous Rickon, adventurous Arya, stalwart Robb, proud Catelyn. and last but certainly not least brooding Jon Snow.

The book explores the North in great detail to Bear Island, the Last Hearth, and the Wall. Much like Daenerys, Arya Stark is another world traveler whose journey is chronicled from her time on the King’s Road, serving as Tywin Lannister’s cupbearer in Harrenhal, training with the Faceless Men in Braavos, and her eventual return to the North. Just as the Dragons are the sigil of House Targaryen, the Direwolves are the symbol of House Stark. In A Guide to Westeros, we are treated to a breakdown of the six proud Direwolves of House Stark: Grey Wind, Summer, Lady, Shaggydog, and the remaining wolves — Nymeria and Ghost. Fans of the series will enjoy a refresher course of the Direwolves, their status, and their owners. Much like their Direwolves, the Starks endured loss and tragedy (cue the Red Wedding), yet the remaining Starks managed to thrive. “When the snows fall and the white winds blow, the lone wolf dies, but the pack survives.”

Finally, our journey ends at the Wall and beyond into the domain of the White Walkers. Ever has the Night King tormented our fearless Jon Snow (later revealed to be a Targaryen prince). The two Kings of the North battled it out in the Hardhome and later had a rematch on the fields outside of Winterfell atop the back of their respective Dragons. In the end, young Arya Stark was the one who took out the Night King, but if you were ever wondering the difference between the White Walkers and wights, this is the book for you. Their physical characteristics, abilities, and weaknesses are documented in a handy table. It is like having the ultimate cheat code. If battles are your jam, A Guide to Westeros is filled with hand-drawn, Dragon’s eye views of each significant battle in Game of Thrones.

Game of Thrones: A Guide to Westeros and Beyond, The Complete Series is the ultimate companion book for any Game of Thrones super fan. You will pour over every inch of this masterpiece. Be sure to grab your own copy wherever books are sold starting November 5. Until then, just remember, “When you play the Game of Thrones, you win or you die.”

The Conflicted Kingslayer: Was Jaime Lannister An Honorable Man?