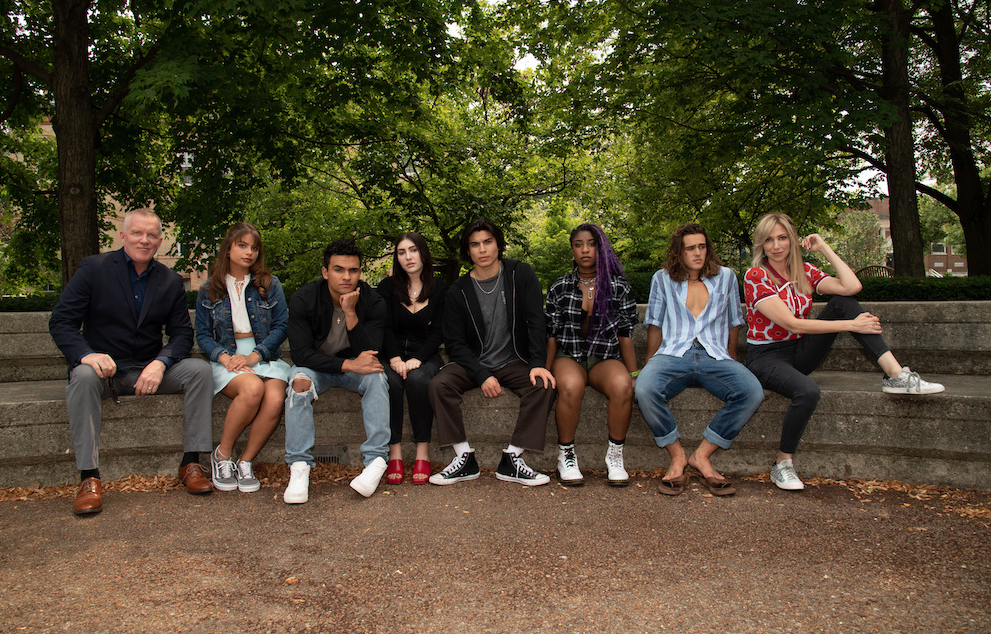 Written in the spirit of the iconic 1980s film The Breakfast Club, The Class is a miserably maudlin characterization of young people in the 21st century.

As I watched The Class, I couldn’t help but think about Tommy Wiseau, the writer, director, producer, and star of one of the worst films ever made, The Room (which inspired the fantastic James Franco film, The Disaster Artist). Suffering through The Class, I was reminded that if you’re able to attract the cash, anyone can write, direct and produce a feature film, send it straight to streaming, and make a living.

Writer, director, producer Nicholas Celozzi has worked in the film industry for over 30 years and has written, produced, and acted in several straight to video, DVD, and streaming films in his career. Having the grit and determination to self-produce films for such a long time is an impressive feat. Celozzi has obviously found his niche in the film industry and is able to attract folks with whom to make movies.

The production value of The Class is adequate. It’s fun to see Anthony Michael Hall (Brian, “The Brain” in The Breakfast Club) as Mr. Faulk, John Kapelos (Carl “The Janitor” in The Breakfast Club) as Nate and former 1980s teen pop star Debbie Gibson as Miranda in the film. The six young ethnically diverse actors who play the high school students all have symmetrical faces with the look of actors who book work as guest stars and series regulars on The CW teen dramas.

Celozzi must be a charismatic leader in order to convince all of the people who invest in his projects because the script is overwritten, the majority of the acting is unbelievable, and the film’s resolution is like a “very special episode” of a 1980’s sitcom.

I loved The Breakfast Club because it was a representation of my generation that had never been seen before at the movies. Teens in the 1980s didn’t have the YA representation we see today. The Breakfast Club was the bellwether that made Hollywood realize the box office potential of films that showed suburban Gen X angst and child abuse teens at that time endured authentically. Before John Hughes’ films, these were only these horrible “after-school specials”  written by middle-aged white guys that were about saying no to drugs and not getting pregnant.

The characters in The Breakfast Club were clear. Brian the Brain (Anthony Michael Hall), Allison the Basketcase (Ally Sheedy), Andrew the Athlete (Emilio Estevez), Claire the Princess, (Molly Ringwald), and Bender the Criminal (Judd Nelson) have to spend eight hours in detention on a Saturday. Their assignment is to write a thousand-word essay to describe who they think they are. The kids aren’t friends and would never be seen together but they eventually find common ground by evading Mr. Vernon (Paul Gleason, Dawson’s Creek), the arrogant, authoritarian teacher assigned to supervise detention.

I remember watching the film when I was 15 with a critical eye, and noticing the misogyny. The Breakfast Club has always been problematic. Of course there were no Black kids, but I was actually okay with no Black kids being in detention in this fancy school in the Chicago suburbs. Black kids in the suburbs were too focused on grades and surviving racist bullying to get detention. Plus if we smoked weed in detention we’d be caught and thrown in jail.

Watching white kids in The Breakfast Club, who were very much like the white kids I went to school with, and being able to actually connect to some of the experiences of Brian, the nerdy white kid, and Allison, the outcast, I found my teenage 1980s kind of representation. As a nerdy Black girl in a predominately white high school, me and my eclectic group of nerdy friends loved this film because it showed a truth we hadn’t seen. Even when you find your people, for many of us, high school was an experience to be endured. When it was over, we were all elated and never went back.

Fast forward to the 21st century. The Class ain’t got none of that nuance. The film’s setting doesn’t work. Six high school seniors who are in a theater class together have to come to class on a Saturday with their theater teacher to write a scene in order not to fail the class.

Miranda, the liberal theater teacher, has Mr. Faulk, a white male teacher, in class to supervise her, and the students are tasked to write scenes in teams to pass the class. It’s not clear why Faulk is there to watch Miranda. The beauty of The Breakfast Club was that it was detention. Mr. Vernon was a total jerk — think Walter White (Bryan Cranston) without the intelligence and ability to “break bad.” Most teachers don’t get away with acting like Mr. Vernon today, and that is the core problem with The Class.

The kids in The Breakfast Club have the obstacle of being restricted to the library for eight hours by a dictator. This obstacle gives The Breakfast Club kids interesting actions to play. In The Class, the adults keep leaving the room to argue, which gives the kids nothing to rebel against. So the kids talk and argue their way through the day while tone policing one another.

The writer overuses dialogue. It’s exhausting watching these kids sit in rooms reciting long monologues about their trauma and emoting for the entire film. This film is so frustrating to watch because people don’t talk to each other this way.

The first thing you learn in Screenwriting 101 is that in film, it’s best to show and not tell. There’s a scene in The Breakfast Club where you see a shot of the clock and then individual quick shots of each kid doing something that actively shows boredom. Each shot is clear, hilarious, creative, and real. With all of its faults, there are moments of unabashed joy that happen in The Breakfast Club that are lovely to behold. There is no joy in The Class.

The kids in The Class are a white writer’s interpretation of “woke.” There is only one white kid in detention, he is a loose representation of the Criminal from The Breakfast Club. His antics are over the top and unrealistic. The rest of the characters are kids of color, and each kid has an “issue” attached. An illness, an abortion, dead parents, abusive parents, one is gay, one is violent, one is sexy, and each kid has way-too-long, contrived monologues lamenting their trauma.

Every kid in this film is a walking “diversity” stereotype. Watching this movie is exhausting. And why are all the Black and Brown kids failing this white lady’s class?

On the plus side, each of the young actors will have a well lit monologue for their demo reels. I think if Molly Ringwald had read this script, she probably would have laughed then set it on fire. Enduring The Class is like working a job you loathe. This review was a public service announcement.

The Class is on digital and in select theaters Friday, September 9, 2022.