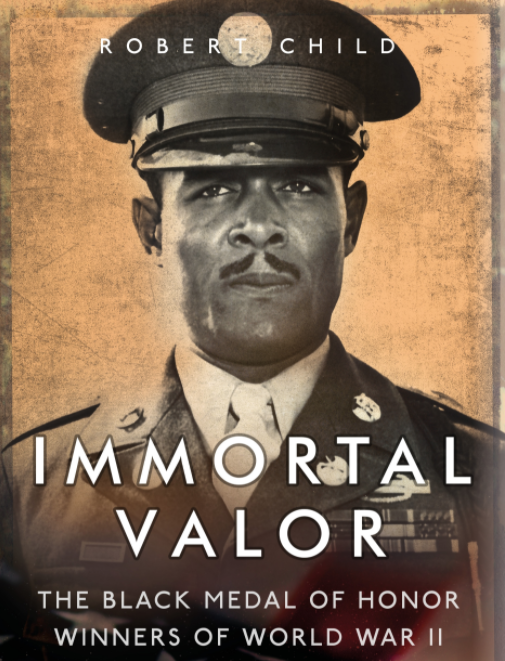 In 1945, when Congress began reviewing records of the most prominent acts of courage by American soldiers during World War II, they recommended awarding the Medal of Honor to 432 recipients. Of those candidates, not a single Black solider who served received the Medal of Honor. The exclusion remained for over four decades.

In 1993, the U.S. Army gathered a research team at Shaw University in Raleigh, North Carolina, to investigate Black service members’ records. It uncovered seven incidents of uncommon valor that deserved the Medal of Honor. It also brought to light long-standing racial discrimination within the government to deny Blacks the highest military honor.

Four years after the investigation, President Bill Clinton finally awarded the Medal of Honor to seven Black Americans in a ceremony at the White House:

Immortal Valor tells the stories of these seven Black soldiers, and the 50-year campaign to give them their recognition. The author, Robert Child, is a military history writer whose research and work towards this book is absolutely substantial. He not only captured the many contributions and sacrifices these men made, but we get to learn about their childhoods, families, and dreams.

The awarding of medals for military merit became a tradition in 1782 under George Washington. He established the Badge of Military Merit, and it was the first decoration given to enlisted men. After the end of Civil War, 25 Black soldiers were considered worthy of this prestigious award for their heroic actions. In the end, six passed the test at the end of the Spanish Civil War.

My favorite story in the book is that of First Lieutenant Charles L. Thomas from Detroit, Michigan. He excelled at school and loved books. Thomas started working at the Ford plant after graduating high school and believed that the war was something that would never affect him. He was wrong. He was drafted into the army on January 20, 1942, and commissioned as a second lieutenant in March 1943. Thomas’ story is interesting because he became one of the first to take part in two new army policies implemented in 1942: First, the push to form Black combat tank destroyer battalions, and second, to train more Black officers.

The small number of Black soldiers who received any recognition is in contrast to the nearly 20 million American soldiers who actually served. Truth is, Black families in the South were not so far removed from being former slaves. All Black soldiers knew was segregation. Everything was segregated — schools, voting, businesses.

Today, Black men and women are more visible in the military. The army that my dad enlisted in during the 1970s is different than the one I enlisted in over two decades later. Yet inequality still exists and has morphed into various forms. The military’s upper levels still rest largely with white men.

This was evident in 2020 when a photograph surfaced on Twitter of President Trump and twenty-two of his top four-star generals and admirals. Of the 41 most senior commanders in the military — those with four-star rank in the Army, Navy, Air Force, Marines, and Coast Guard — only two are Black. Neither were in that picture.

There are few Blacks at the top of our military, and the reasons are rooted in a painful history of this country. In 1925, a directive for Army officers stated that Black service members were a class “from which we cannot expect to draw leadership material.” That directive has set the tone. The armed forces were not fully integrated until after World War II. It’s a legacy that has left Black Americans without the opportunity to have the same family history of service that many white generations have.

When I think about elite academies — West Point, the Naval Academy in Annapolis, and the Air Force Academy in Colorado — although they have increased their enrollment of Black recruits, they still remain largely white. Black people who do become officers are often guided into transportation, supply, and logistics rather than areas that lead to the top spots.

The seven men profiled in Immortal Valor have passed away now. Four of them died during their brave actions in the war. Although they fought for a country that didn’t always value them, they were really fighting for each other, their families, and their legacies.

As an army veteran and someone who geeks out over military history, I enjoyed this book. Each story is a journey, and I was inspired by them. Their efforts paved a way for Black soldiers today, including for Black women being able to serve and be recognized.

I was always taught to believe that delay is not necessarily denial. The delay in these soldiers receiving recognition does not diminish their heroism and patriotism. It actually sets them apart as real-life heroes. They answered a call that was greater than themselves, and we are all privileged because of the sacrifices they made.

Immortal Valor is available wherever books are sold Jan 11th.