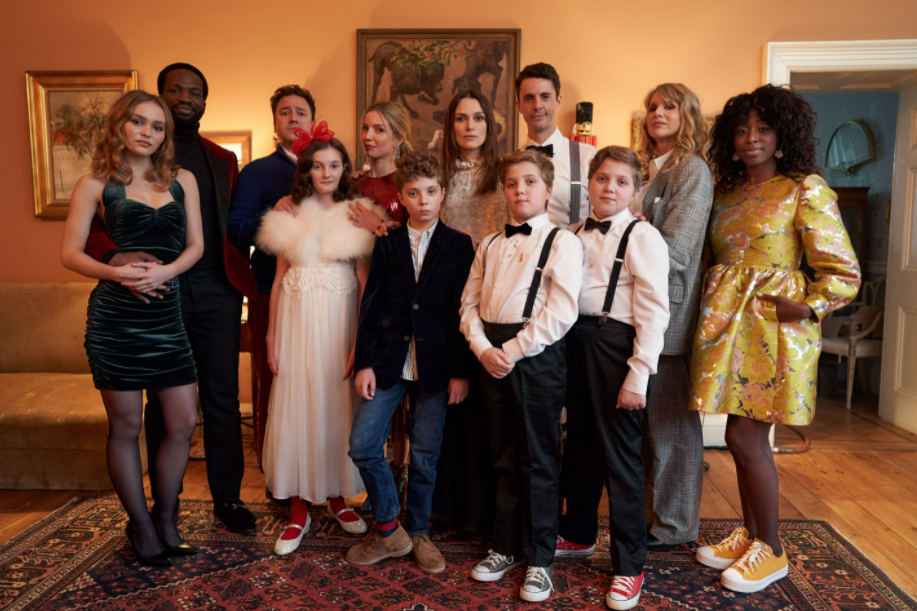 “It’s a holiday movie,” they said. “It stars Kiera Knightley.” So here I am thinking it’s going to be warm and fuzzy, maybe a little over the top. I never knew a holiday film could fill me with so many mixed emotions.

Silent Night is smart and bizarre and haunting all at the same time. It’s not what you think it is, even as you form new opinions through the film. But, as with most interesting stories, the ending doesn’t quite stick. It’s still a pretty darn good movie. Gotta love the British knack for dark humor.

The film is a British tale of impending doom. A group of old friends reunites to celebrate Christmas in the comfort of an idyllic country home complete with wine, snow, hors d’oeuvres, and government conspiracies. Burdened with the inconvenient truth of death coming for all, they decide to be sensible. They party, love, toast, and dance. But, it takes much more than bottles of prosecco to give them the courage to face their last night on earth. The film stars Keira Knightley (Love Actually), Matthew Goode (Downton Abbey), Roman Griffin Davis (Jojo Rabbit), Annabelle Wallis (Malignant), Lily-Rose Depp (Voyagers), Ṣọpé Dìrísù (His House), Kirby Howell-Baptiste (The Good Place), Lucy Punch (A Series of Unfortunate Events, 2017), and Rufus Jones (Flack).

There have been numerous films that talk about the Earth and the repercussions of not taking care of it. There are very few films that successfully have the earth, or nature, as the villain. Bird Box and The Happening come to mind. The overall idea for both is that an unseen presence causes the world’s population to commit suicide.

Silent Night takes a more sophisticated approach with the unseen presence being the government, telling the world there’s a storm coming that is carrying a gas that will kill the world and cause a violent and painful death full of convulsions and blood. The alternative is to commit suicide by taking a pill that will cause a painless, peaceful death. There is a theme of fear. There is a theme of trusting that your government has your best interests at heart. It’s a very close-to-home debate as we are now making our way through COVID variants and vaccines. It makes the audience choose a side, to debate while watching whether they would take the pill or not. The conversation between the characters is emotional and logical at the same time. It’s a great on-screen portrayal of a touchy subject.

The cast was a hodgepodge of talent, but it works. The standout character was, by far, Roman Griffin Davis as Art. The character that the film could have done without is Lucy Punch as the resident lesbian, Bella. Don’t get me wrong, I like Lucy Punch as an actress. She’s always playing quirky and fun characters. Unfortunately, her portrayal in this film was abysmal. There was a fake voice involved, and every time she spoke it was as if she were trying not to burp or something. Maybe she was trying to sound more masculine against the other females in the film? I don’t know, but it didn’t work. Davis on the other hand was brilliant. Audiences loved him in Jojo Rabbit, and his earnest and dedicated performance in Silent Night impressed even more.

The story in Silent Night is one of my favorites this year. It’s a bit over-the-top but intriguing. The idea of impending doom is not so far-fetched when you think about the state of the world we find ourselves in, not limited to the omicron variant. It’s a scary thought, which I suppose is where the horror elements come through. The film is smart, satirical at times, funny, and emotional. It makes you think. It’s social commentary and art rolled into one. Watching Silent Night, it’s hard not to wonder what type of person you would be if you knew it was your last night on Earth.

Silent Night marks writer Camille Griffin’s feature directorial debut, and she did a pretty good job. The film has a nice balance of suspense, drama, and comedy. It made sense to me, as someone from a big family, that during a certain disaster, dumb things will be said, priorities will be skewed, and ridiculous conversations would occur. I will say, when it comes to the film’s writing, it’s not without problems. There was an overall lack of character development for some of the less featured characters. A particular mention would be the development of Kirby Howell-Baptiste’s character, Alex. Her relationship with her partner, played by Punch, is strained and awkward, but we never find out why. Instead, we get one Black female in the film with minimal dialogue, who passes out from drinking too much. I would have loved to know why, from a story standpoint.

Silent Night is not your standard Christmas movie. It’s commentary, suspense, drama, family, and romance in a slowly melting snowball. The question of how you would spend your last night on Earth is successfully showcased during a pandemic. The cast is charming, the dialogue is witty, and the banter is comical, all against the snowy backdrop of an English countryside estate. What more could you want for Christmas?

Silent Night is in theaters and streaming exclusively on AMC+ on December 3, 2021