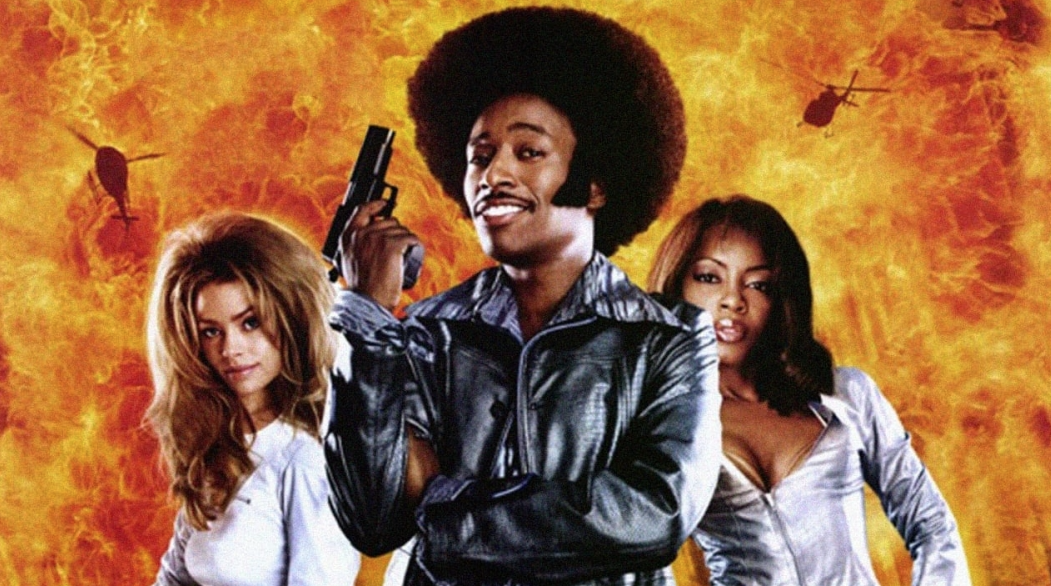 Oh, thank goodness. Thank goodness I got to re-watch a film that has attained a cult following being actually good as opposed to strangely edited and occasionally hilarious.

A few weeks back I lamented watching Pootie Tang rather than Undercover Brother. Today, I feel justified in making that complaint.

If Undercover Brother is more conventional and formulaic in its structure than Pootie Tang, that’s because, well, it actually has a structure. If the jokes are admittedly less innovative, the fact there’s a higher frequency of jokes that actually land makes up for this.

I won’t spend this entire review comparing films because, in a way, both have different target audiences despite having vaguely similar premises. Although both are ostensibly about a Black icon fighting different iterations of The Man, the personification of white corporatism, Pootie Tang casts him, somewhat troublingly, as a faux-pidgin-speaking entertainer, Undercover Brother presents him and the team behind him as explicitly pro-Black and fighting inequality.

And, personally, I find that solid and dy-no-mite.

Now that’s out of the way, can I just reiterate that this movie is hilarious? And that may be because everyone, and I mean everyone, fully commits to their roles. Eddie Griffin as Undercover Brother hits all the right notes. He knows to portray Jackson not as a 70s blaxploitation character but as someone raised on those characters and aspires to emulate them.

As a straight-faced foil, Aunjanue Ellis is perfect as Sistah Girl. The movie is silly as hell. From having low-speed golf cart chases that result in Top Ten explosions to Conspiracy Brother (Dave Chappelle at his absolute best) enumerating the apparently white supremacist history of “good morning.” Despite all this, Ellis plays it as seriously as a tragedy and, in part, it is.

Obviously, it’s not exactly King Lear or Oedipus Rex. It is the tale of pathological commoditization of Black culture. It is the story of losing oneself to external forces as powerful as eurocentric mandates to assimilate.

I’ve said it before, and it’s not a great revelation, but the difference between tragedy and comedy is the ending. If the movie ends with General Boutwell (Billy Dee Williams) and his fried chicken place (isn’t that sentence fragment alone just the best kind of ridiculous?) creating Haitian-style zombii (not “zombies”) of Black people it’s a comedy. If it ends with Undercover Brother losing himself entirely to his white-i-fied Anton Jackson persona, then the film is a tragedy of the bleakest kind.

In that instance, Undercover Brother would more likely resemble something like the original ending of Get Out. However, it ends with the plot foiled and Sistah Girl saving Undercover Brother from White She-Devil (Denise Richards, earning every cent of her paycheck). The audience can laugh in relief that we came to the brink but avoided catastrophe.

Since we’re on to the partly serious aspects of the film, it’s worth discussing the politics of Undercover Brother. Don’t get me wrong: the film isn’t a treatise on anything more than staying solid and keeping it funky despite The Man’s attempts to keep you down. That doesn’t mean hints of an ideology of Blackness don’t emerge every now and again.

I’m thinking here of the opening scene wherein the Narrator (J.D. Hall) describes the “seemingly random” acts that tarnished the pro-Black consciousness of the 60s and 70s. I’m not sure that I buy Urkele as indicative of anything more than network executives’ insatiable thirst for a catchphrase-spouting marketing opportunity. What would have been more interesting would be to explore how Family Matters perpetuated the strangely 80s trend of portraying Black men as cops to show — what? Their respectable masculinity?

Then again, that lens might disrupt Undercover Brother itself. Even this 2002 film seems to have felt that the only way a Black man could be a viable presidential candidate was if he as both a “staunch advocate of Civil Rights” known to hang with Jesse Jackson. He also must be a member of a military-industrial-complex that pro-Black thought leaders like Kwame Ture derided wholeheartedly.

They also depict Dennis Rodman’s wearing a bridal gown and wig as an undeniable sign of white-orchestrated sabotage. I only have so much space to write, but let’s just call that implication, at best, a bad attempt at a “funny” visual gag (“MAN IN A DRESS, TEE-HEE”). At worst, a bit of queer-phobia disguised as concern for the declining virility of Black men.

I know the person who reads retrospective reviews yet gets mad when I apply a retrospective political lens, it was the early aughts: they might not have “known any better.” But never forget, PWRRRYGMWIAARPL, Black queer people have always, always existed. It’s just a matter of which movements decided to give them platforms and when.

In all, I find Undercover Brother hilarious.

It’s occasionally muddled, and at times insidious messaging aside, Undercover Brother works as a love letter to the 70s where, in the film’s view, Black consciousness and Black heroes ruled the land. If you’re still upset I discussed the politics of a comedy, please understand that 1) the film is political (it’s helmed by a member of the Lee family, for God’s sake!) and 2) I could only discuss these things after I had recovered from laughing my ass off.

The bit about a pretty, helpless, white woman being the “Black man’s kryptonite” shattered my vocal cords with laughter. The editing, the direction, Richard’s acting: it was all pitch-perfect. The fact that every man, even Conspiracy Brother, later celebrates Griffin’s character sleeping with a white woman redoubled me over in laughter. It was a great presentation of how the eurocentric ideology of beauty standards can infect even the most — oh, wait, that’s right. Comedy. Certainly, no politics are being explored here. Not one bit.

The slapstick humor is great. Neil Patrick Harris as Affirmative Action hire intern Lance is phenomenal. When it comes to comedy, Undercover Brother gets it right nine times out of ten.

What can I say? Yeah, it has its problems. That will be inherent to any film that attempts to tackle a subject as often nebulous and ineffable as “real Blackness.” Is the General real despite having served in Vietnam, a war often contested as emblematic of American imperialism? Is Sistah Girl already real for being a member of the Brotherhood, or does she reach true realness when she begins to rock a natural? I don’t believe your answers to these questions are indicative of anything other than your particular ideological lens, but there are many of those, even among pro-Black people and movements. Undercover Brother is just another iteration of the confusion that occasionally surrounds the question of realness as it concerns a Black identity.

But, as I said, go watch the movie. You’ll be happy you did, and your mouth will be sore from how often you howled laughing. And, if you’re not careful, you might end up finding a political message in there. Maybe two.

‘The Subject’:An Examination of White Saviorism, Accountability, and Consequences