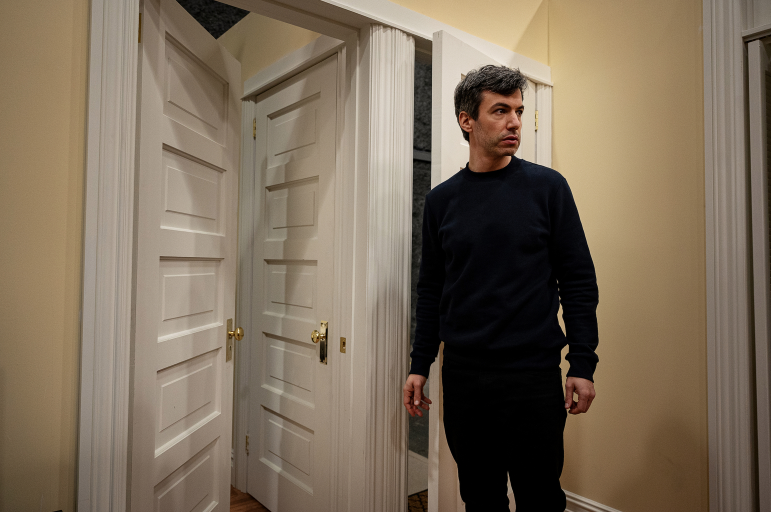 Nathan Fielder and HBO’s The Rehearsal might be one of the most well-written comedy series I’ve seen in a while. And this is strange because it’s ostensibly reality TV.

The central premise is that Nathan Fielder (Comedy Central’s Nathan for You) is setting out to help people prepare for life events by painstakingly rehearsing for every possible outcome. For instance, the first episode of the six-part series concerns a Brooklyn teacher who wants to confess to a friend that he has been lying for years about having a graduate degree. In order to facilitate this, Nathan and his crew run dress rehearsals of sorts to get the man, Skeet, ready for the real event.

Skeet’s rehearsals match the others in the series in that all of them involve lavish sets built as 1:1 scale models of the places in which certain confrontations will take place. For Skeet, the place is a Brooklyn trivia bar. To get Skeet ready, Nathan hires a fake bartender, fake bar patrons, builds a fake oven to simulate the production of real pizzas, and even has the actor who will portray the friend meet with the friend under false pretenses in order to study her mannerisms and, in that way, make the rehearsals more “real.”

And then, of course, that same episode shows us that, in order to prepare for introducing Skeet to the rehearsal concept, Nathan himself had a rehearsal with an actor who played Skeet. And, of course, this rehearsal happened on a soundstage in an exact replica of Skeet’s apartment (although Nathan tells us, they got the seats wrong, and the minuscule chair he had to sit in during the real event made him look ridiculous.) This is where the genius of The Rehearsal comes in.

I don’t know if writers Fielder, Carrie Kemper, and Eric Notarnicola are huge Charlie Kaufman fans, but the overlapping layers of rehearsals, re-rehearsals, and pre-re-rehearsals coupled with subversions of where we and the subjects (targets?) think the story is going feel like the product of three very funny people carefully studying the structure of Kaufman’s Synecdoche, New York in addition to Neil LaBute’s The Shape of Things.

What begins as Fielder helping Skeet anticipate coming clean to his friend becomes Fielder taking him skeet shooting (because of course) in order to facilitate a closer bond between them that would allow Skeet to open up more. Elsewhere, Fielder prepares a man, Patrick, to confront his brother about an inheritance dispute by staging an inheritance dispute with the actor playing Patrick’s brother. I won’t get into the details here, but suffice it to say, in the quest to get Patrick’s emotions more involved in the rehearsals, Nathan’s writers contrive a way to have him forge a bond with a father-surrogate character only to rip that bond apart in a way painfully similar to what has happened to Patrick in real life. On camera, Patrick never learns that he’s been put in this matrix, and, once we see how it affects him, we can only pray that a kindly producer let him in on the joke — er, “joke” — after production wrapped.

If this all sounds mean, well, it is. In fact, some of the show’s manipulations would feel downright sociopathic if Fielder’s onscreen persona had any hint of glibness or open hostility about him. But I don’t know that that makes it reprehensible or lacking in entertainment value.

Personally, I find cringe humor hard to watch. By cringe humor, I mean situations like we find in both versions of The Office, but particularly the UK original, where people’s idiosyncracies clash with one another in ways that are often painful to watch but always impossible to look away from.

In true Fielder fashion, the show begins taking on an emotional arc for Nathan where his television persona will learn a lesson or two and grow as a person. The version of this we see in The Rehearsal is a months-long experiment revolving around a woman named Angela who wants to “rehearse” for marriage and motherhood. The plan? Bring in a series of child and teenage actors to portray “Adam,” the son who begins solely as Angela’s — and, for a brief moment, Robin’s, the pot-smoking, fornicating, numerologist Christian Angela met online — but this situation slowly changes in a way you’ll simply have to watch to believe.

As far as content goes, some people may feel offended that the people Nathan claims to be helping are actually being duped or, worse, chosen to be objects of ridicule. Angela is a born-again Christian who seems pleasant enough until she begins enumerating all the things that are actually Satanic (Halloween, poop jokes, maybe even oranges). Skeet is a nice-enough guy but shockingly competitive about trivia nights taking place in an average Brooklyn bar. Even Patrick, who arguably has the highest emotional stakes in his situation, says certain things that make you want to groan and hide your face in vicarious embarrassment (“She’s not a golddigger. She’s basically a J*w. You know how Jewish people are.”).

If this is how you feel, I suppose you are entitled to your feelings. The show can be awfully mean in spirit, if only because the subjects are never precisely aware of what’s happening. We don’t learn the effects of this disorientation on them, but I know how it affected me. By the end of the series, I wondered if any part of it were real or if it would end with Fielder revealing that everyone involved were actors and HBO’s The Rehearsal was really a rehearsal for a future Showtime series.

Overall, this is some of the best television I’ve seen all year, comedy and drama alike. I’m sad that it’s only six episodes, but Fielder and his writers seem to understand the value of editing, of starting too late, ending too early, and leaving them wanting more. And I desperately want more, because The Rehearsal had my throat hurting from how hard I was laughing.

Whether it’s Angela explaining to Fielder (who is dressed as Batman) why Halloween is devilment, or Fielder starting a school for rehearsal actors and then rehearsing for that school as one of the actors (with a different actor playing a spot-on Fielder), this project is one of the funniest things I’ve seen in a long time. I would say that I’m going to google some of Fielder’s upcoming projects, but I can’t do that.

As Angela told me, Google is run by the Devil.

The Rehearsal premieres Friday, July 15 on HBO and HBO Max.