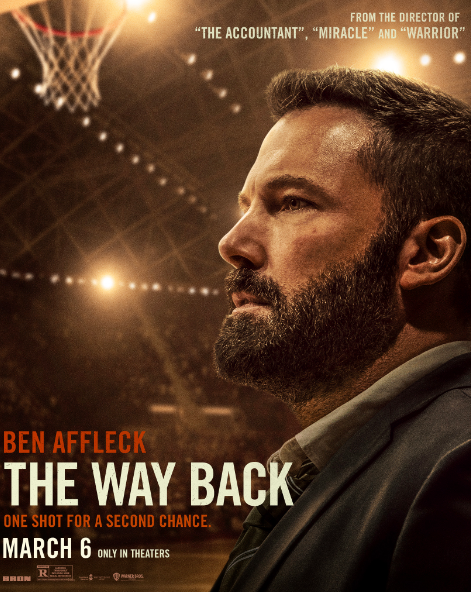 Ben Affleck’s new film, The Way Back, directed by Gavin O’Conner (The Accountant), is a story we’ve heard before, but can still identify with on many levels.

As with most sports films, the film is about redemption and making a come back in life and on the pitch/court/field/etc. It’s a decent story with poor execution in the beginning. The draw is absolutely Ben Affleck, but that’s about it. There’s a little old movie that came out in 1986 called Hoosiers, starring Gene Hackman. It’s ridiculous how similar these two films are. The big difference, however, is the connection to the characters. It takes a lot longer to get there, but by the end, you are rooting for the right team.

The Way Back is about a former high school basketball star named Jack Cunningham, played by Ben Affleck. Jack was the best of the best in his day. But as his glory days fade and life sets in, Jack becomes angry and an alcoholic. He makes too many mistakes to count. Things start to look up when Jack is asked to coach a failing team at his alma mater. He must learn to better himself and his team if they are to have any chance. The film stars Academy Award winner Ben Affleck (Argo, The Accountant), Al Madrigal (Night School), Michaela Watkins (Casual), Janina Gavankar (True Blood), Glynn Turman (Bumblebee), Brandon Wilson, Will Ropp, Charles Lott Jr., and Melvin Gregg.

Part of the reason the film has a hard time capturing its audience is that we aren’t given the opportunity to invest our emotions into any other character except Jack. There’s an entire basketball team that we could have gotten the chance to know. Building up those characters could have really amped up the film. At one point, I think the film attempted to give us what we were missing but lacked the appropriate jump-off point, so those scenes got lost and became unnecessary. While learning about Jack, the set up was way too long.

Essentially, the audience was getting bored watching him ruin his life. The reveal or important information came too late in the game. The slow reveal can be cool when done correctly. Unfortunately, this one missed the mark. It did provide fuel for an emotional second half of the film, but what good is only half a film if you’ve checked out the beginning? It was like two different movies from the first half to the second half of the film. Luckily, there was a course correction and the film eventually got on track and was enjoyable. The film flowed a lot better once it got over that initial hump.

Ben Affleck as Jack Cunningham is the saving grace. He is the true definition of an imperfect hero. His story of redemption is genuine, once you have all the facts. Affleck’s portrayal of a defeated drunk is amazing to watch on screen. I am also impressed by his portrayal of a basketball coach. At first, Affleck doesn’t strike you as a basketball anything, but once he gets in the gym, it all clicks. It seems like Affleck really understands his character. He is complex. He is an idiot. He is charming. Affleck was quoted saying, “I have a very deep personal understanding, not just of the platitudes — drink too much, quit, struggle, get better, and so on — but of the little moments and details, the degree of denial, the struggle with coming to acceptance that this is an issue that is affecting your life, and the difficulty in having to recover from that.” The film clearly hits home for Affleck, and that passion and resonance comes through the screen. He did a fantastic job.

As many can see from the trailer, the film is about basketball. The basketball scenes are fun to watch. They provide a much-needed comedy relief to the film. They allow the audience to calm down from the tense moments. They are choreographed and filmed really well. The style in which they were shot was my favorite. A good one-liner and a freeze-frame can go a long way. There were actually gasps in the audience as we watched the high school team lose and lose. That moment when there is a real suspension of disbelief and you’re reacting like this is a real game and those are real players, the film has done something great.

The Way Back has its shortcomings but redeems itself in the end. There were quite a few unnecessary shots, but overall a good film. Ben Affleck is still the actor to watch, despite his stint as Batman. Sports movies are always emotional, and this does make you feel good. They got it right in the end, so stick with it all the way through, and you’ll be fine. The film is in theaters Friday, March 6, 2020.

Review: ‘The Tender Bar’ Falls Flat with an Average Storyline and Marquee Names