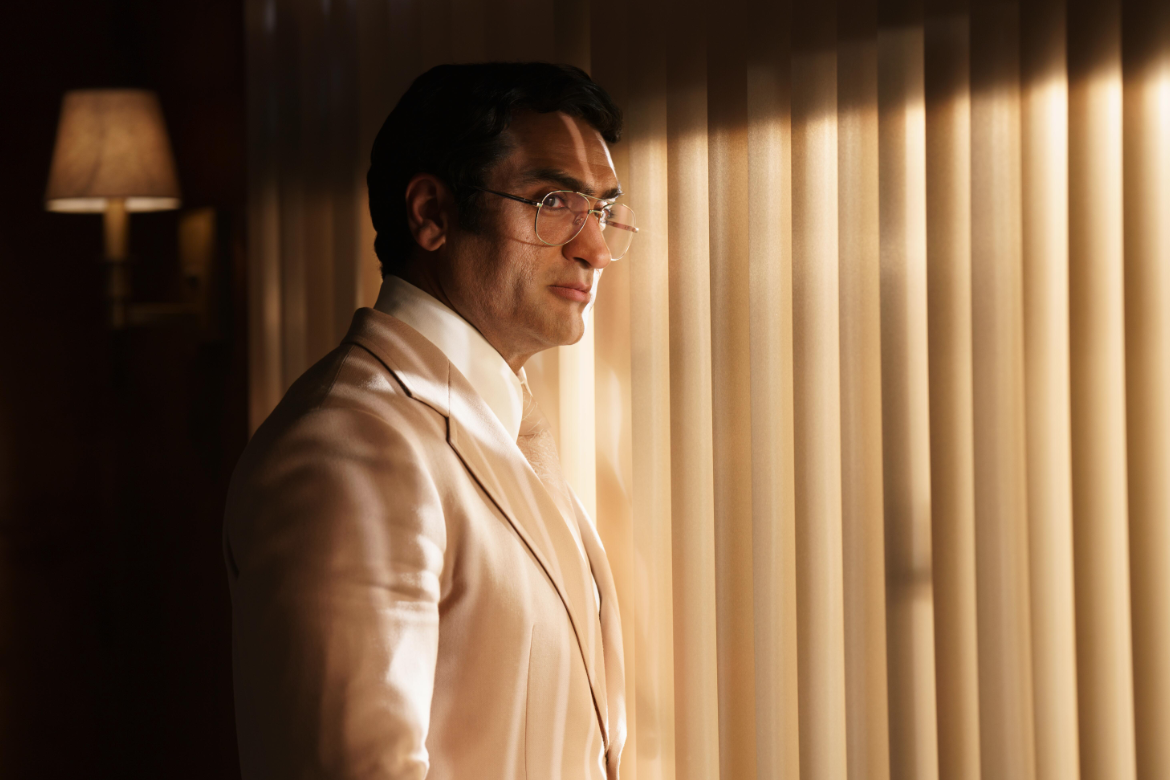 I’m going to make a couple predictions, one of which will become immediately self-fulfilling.

First, I predict that excitement around Hulu’s Welcome to Chippendales will reach a fever pitch early on. This will be because it stars the affable, noteworthy, and talented Kumail Nanjiani (The Big Sick, Eternals). His fans will be excited to see him in a starring role in a vehicle made for him.

It’s a vehicle that will allow him to show off his acting chops in a villainous role, playing the notorious founder of male striptease revue Chippendales, Somen “Steve” Banerjee. This excitement will bring fans in, but I’m not sure it will make them stay. I predict that, by the midpoint in the miniseries’ eight-episode run, there will be a precipitous drop in viewership, and I’ll tell you why shortly.

Second, I predict that Welcome to Chippendales, developed for television by Robert Siegel (Hulu’s Pam & Tommy), will be unfavorably compared to the work of Ryan Murphy, particularly his true crime tales. I predict this because I’m about to do so, but I imagine I won’t be the first nor the last.

Welcome to Chippendales is the true story of Somer “Steve” Banerjee and his creation of a striptease empire. Each of the eight episodes follows the trajectory of this foundation and rise, largely in chronological order. We meet Steve, as he prefers to be called for political reasons, as a lowly and lonely Mobil gas station clerk. With money he has saved over the course of five years in America, he buys a rinky-dink nightclub and tries to turn it into a backgammon lounge. When this fails, he tries his hand, with the help of purported nightclub promoter Paul Snider (Dan Stevens) to transform the place into various things: a disco; a female mud-wrestling joint; even, when these fail, the home of West Los Angeles oyster-eating contests.

Steve’s Road to Damascus moment occurs when he and Paul stand outside a strip club. Men pay to see the opposite sex naked, Steve reasons, so why wouldn’t women do the same? From here, a fledgling version of Chippendales is born (named, surprisingly, after Thomas Chippendale, an eighteenth-century cabinetmaker known for his elegant work. If Steve knows anything, it’s this: he craves to possess and to make the finest things in life).

Along with Steve on the journey to the top is Nick De Noia (Murray Bartlett), a queer, two-time Emmy award-winning producer, director, and choreographer who doesn’t seem to mind that he won those Emmys for a children’s television called Unicorn Tales. Nick and Steve hit it off, with Steve giving Nick complete creative control to revamp what Nick sees as “a crass spectacle, a cheap gimmick.” Helping him do this is Denise Coughlin (Juliette Lewis, in a phenomenal, hilarious, and heartbreaking performance), a sprightly fashion designer who pioneers Chippendales’ famous “breakaway” pants. Rounding out the cast of characters are Irene (Annaleigh Ashford), an accountant and Steve’s future wife, and Otis (Quentin Plair), a Black semi-professional dancer who feels conflicted with his role at the club.

I would explain more, but that would be to spoil some serious plot developments for those, like myself, that didn’t know the criminal half of the Chippendales tale. This is, perhaps, the problem. We know Steve is a control freak sometimes, and we know the advertisements have told us some bad things happen, but we have no idea what, other than, possibly, the typical tale of “man gets everything, but it costs him his humanity.”

This is where prediction number one comes in. People will watch for Nanjiani, but will they stay for an at times desultory story about a man and his business woes? Here’s where prediction number two comes in: the show might have done better to go Full Murphy and open with the climax. Show us the crime, then flashback and let us know how we got there.

Keep in mind, viewers went in to The Assassination of Gianni Versace having, let’s just say, a pretty keen sense of what would happen to the protagonist. What mattered was how we got there, the respective mentalities of Versace, his assassin, and those around them. Yes, this flashback structuring is tired, nearly cliche at this point, but it also serves the purpose of keeping audience interest. I’m not sure six episodes of “look how long it took Chippendales to get popular” can do that.

That said, what the show has working for it is Annaleigh Ashford (a Murphy alum), Juliette Lewis, and all the rest of the leads performing as if their lives depended upon it. Lewis reminds us she can play ditzy, determined, heartbroken, conflicted, and wrap them all up into one plausible person. Every scene she’s in is a delight. Ashford likewise brings a quiet sensibility to her role as Banerjee’s wife. Her character Irene wants to believe in Steve. She wants to think the best of the man whom she loves, but once she is presented with evidence of serious, serious wrongdoing, she has no problem acting in the best interest of herself and her daughter.

Finally, Nanjiani as Steve Banerjee does his best to break free of heroic or comedic typecasting. This “does his best” is not intended as a backhanded compliment. What I mean is the writing doesn’t allow him much latitude to express a wider range of Steve’s emotions. Mainly, Steve is written as quietly joyful or silently seething. A few early scenes of him dealing with his mother’s disappointment showcase that Nanjiani does have range, but this range is truly on display painfully late in the series, when Steve learns that the fallout of his crimes will affect those closest to him and he desperately begs to stop the inevitable. It’s unfortunate for Nanjiani that the series doesn’t afford him more moments like this. They make a real case for his being cast in more lead roles.

Overall, Welcome to Chippendales is fine. It’s well-acted, and, though the writing feels a little desultory at times, the story is interesting. Lackluster direction and questionable structuring choices, however, threaten to make this Hulu miniseries feel less like a Robert Siegel production and more like a Ryan Murphy knockoff; indeed, it often feels like Hulu saying, “We have Ryan Murphy at home.”