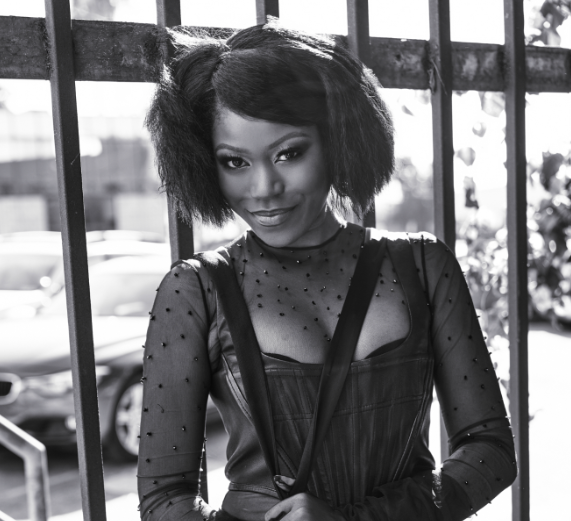 Typically, American Black folks don’t fool around with the dead. We may respect, revere, and reference them, but talking with them and solving their problems is usually considered taboo. However, as of late, we’re being included in stories that allow us to explore what some would consider the mystical. That’s what makes Riele Downs’ title role in Darby of the Dead intriguing.

BGN met with Downs via video chat to discuss her new film, how she connected with the character, and her passion for fashion.

Tell us about your upcoming film Darby and the Dead.

It’s a supernatural take on a high school film, which is interesting because I haven’t seen a lot of those. It’s like Mean Girls with a supernatural twist. It centers around a girl named Darby Harper who went through something traumatic as a kid and develops the ability to see dead people. She creates this side business where she helps them move on to the next realm. When a freak accident happens at school with one of her frenemies, they’re forced to team up to take care of a similar goal.

How did you connect with your character?

I talked to the director and my castmates, and we basically discovered that there was just so much context that comes with this script. We wanted it to feel deep. We didn’t want it to just feel like a very surface-level high school film, so we did a lot of workshopping into the past. What was my relationship with this frenemy character? What was the day like when my mother passed away? I didn’t have my own experiences to necessarily pull from for those things.

In terms of the ghost stuff, for that I just really put myself mentally in the [character’s] shoes because I’m not about to do anything physical with that. I’d like to keep my distance.

What is the one thing you will always remember about making this film?

Probably that it took place in South Africa. The film doesn’t [take place there], but we shot it there. Obviously, that’s somewhere I’ve always wanted to go. It really is the Motherland. It has so much history, and luckily, I got to see some of that after the shoot. I was so busy during the shoot, I never got to really go do much, but afterwards, I stayed for a week. I went to Robben Island. I went to some museums. I took in the arts and culture. Also, I can say firsthand that South Africa is not just some desert land like people think. It’s a country. There are people there, buildings and culture, and great food. That was extremely memorable.

How do you think your role as Charlotte in Henry Danger prepared you for this role?

I would say it’s more in the work that I had to do. I never before this film had to do a role where I had this much of a demand and as an adult. Those hours are totally different, but luckily Henry Danger did definitely work us a lot. I had to go over lines and learn them very quickly. We did an episode per week. We would be at work basically all day having to learn lines very fast, having to act on our feet, improv a little bit. I definitely think what Henry Danger required from me workwise helped prepare me for the work that I had to do for this film.

Tell us about your hobby that you’re passionate about and how you got started.

I just love the visual arts in general so much. I always have, ever since I was a baby. I’d be painting on my mom’s walls — which sorry, Mom — because she didn’t love that. But in terms of fashion designing, literally in kindergarten me and my best friend would design entire lines. I guess it always came naturally, but where it connected in this industry is I realized, “Hey, I have events to go to. There’s actually a platform for me to wear these on now.” I know how to sew, but not to the level I would need to yet, so I found people that could make these outfits and I have somewhere I could showcase them. I have somewhere that will actually impact people if they see this. Why not just marry the two passions together and do something?

Now, I’m working on releasing a line because I just love fashion. I think that it’s definitely a medium where you’re able to express yourself freely, and everyone has their own style. Wearing the right outfit can really just make your day in terms of comfort and just if you feel like you’re expressing yourself.

If you’d like to check out Riele Downs and her supernatural abilities, tune in to watch Darby and the Dead on Hulu December 2, 2022.

Review: The Wearying, Druggy Slog of ‘It’s a Wonderful Binge’