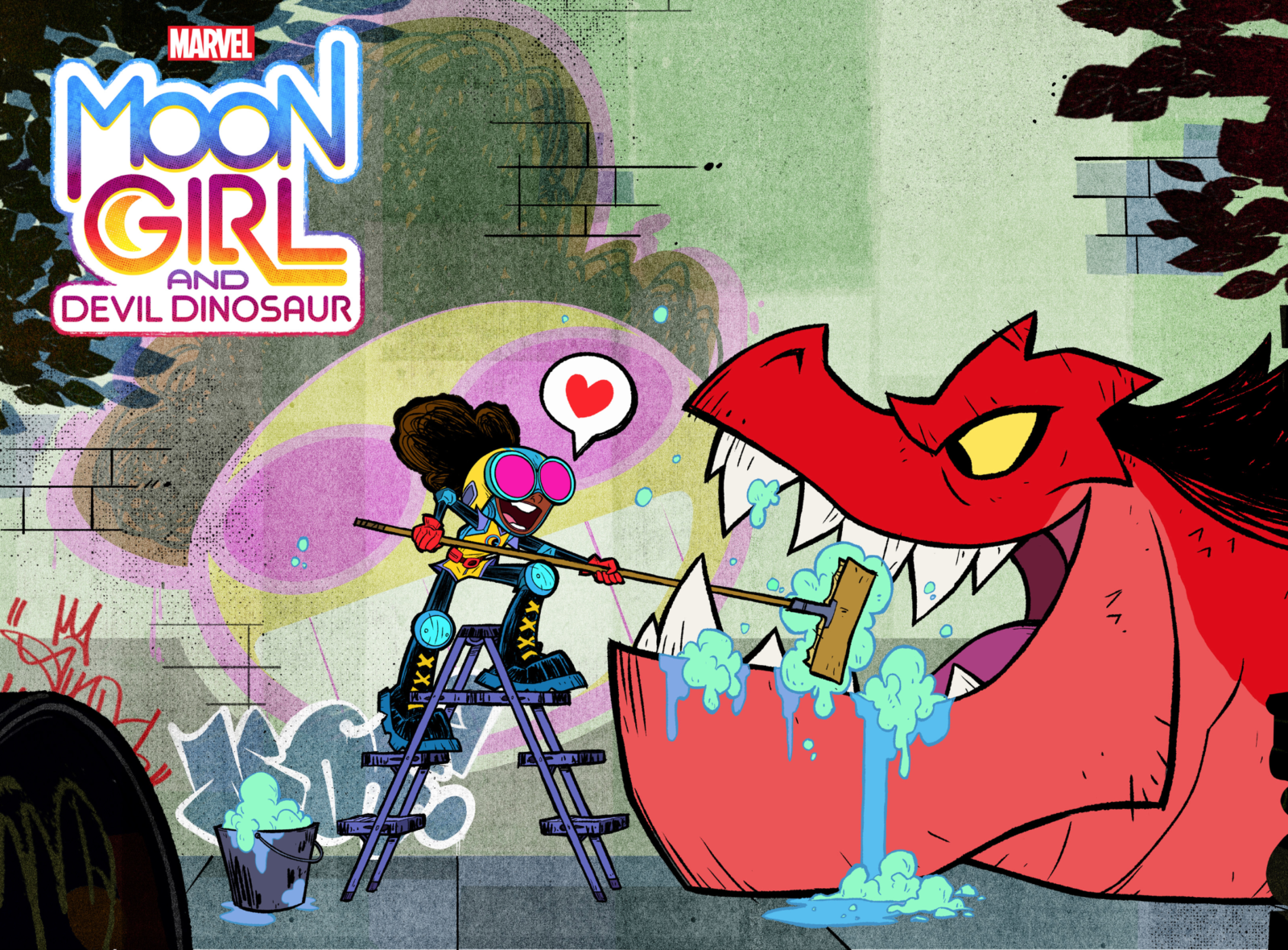 Things got pretty thrilling as a special preview of Marvel’s Moon Girl and Devil Dinosaur skated into San Diego Comic-Con on Thursday. The upcoming animated television series is based on the Marvel comic book series of the same name, and yes — it’s centered on a Black girl-genius teen superhero!

Lunella Lafayette’s life gets turned upside down when the gifted teen accidentally brings Devil Dinosaur into present-day New York. Of course, chaos immediately ensues, but in one of the best ways possible. Lunella and Devil Dinosaur become a dream team. With the help of her best friend and eventual manager, Casey (Libe Barer), they protect the lower east side of New York City.

Here’s what the cast and creators had to say.

The biggest news has arrived and includes a list of guests and a recurring voice cast: Alison Brie, Andy Cohen, Daveed Diggs, May Hawke, Jennifer Hudson, Craig Robinson, Cliff “Method Man” Smith, Cobie Smulders, and Westley Snipes. Revealed before the panel, the news that Laurence Fishburne will have a recurring role as The Beyonder had already landed. However, Fishburne gave panelist attendees a special message about how much this comic–and soon show–means to him.

Additionally, Loter dished that fans can expect many Marvel Easter eggs throughout the series and even exploration of Marvel characters (including villains) that haven’t been introduced in the MCU yet. So, well-versed Marvel comics fans should be on the lookout. However, in response to an audience question, he shared that (while he loved the Disney+ show), there are no plans to have Moon Girl and Moon Knight team up. Loter said that the vision for the show is for Marvel’s Moon Girl and Devil Dinosaur to be “complimentary to the MCU,” not canon to it.

The creators also mentioned that there are “Many toys coming!” But they couldn’t say much more. There will likely be Devil Dinosaur plushies in the future for those ready to have their own furiously loveable dino friend.

Making her San Diego Comic-Con debut as a panelist and the voice of Marvel’s first Black girl lead on a Disney show gave White a mix of nerves and excitement.

“I’m shy, and this is wild,” she said when asked her favorite thing about Lunella. “She’s very smart, and she felt like me.” The voice actress was overwhelmed by the significance of her accomplishments. She noted later that she started voice acting with Phineas and Ferb. She’s told everyone in attendance that she’s grateful.

Joining in the gratitude, Tatasciore decided to grace the panel with his finest Devil Dinosaur sounds. Not shy about embracing his inner dino, the Marvel voice-acting veteran summed up his character perfectly.

“Devil Dinosaur would do anything for Lunella. He can destroy anything but is a big softy that loves snuggling, hot dogs (all food, really)” he said. “He’s a good guy.”

For the entire cast, the significance of the show’s diversity wasn’t lost. Feeling close to one another, they echoed the same sentiments: the show is all about authenticity. Zamata (Lunella’s mom, Andrea) explained that the show is special because it has a “Strong family theme.” She said it’s “Great to see a Black family on-screen in one house,” especially with different generations of family members.

Her character, Andrea, runs a roller rink on the lower east side and also enjoys hosting parties for the community. She even DJs at the roller rink. The feeling of a tight-knit community in New York that reflects its real-life diversity was paramount for this project.

That meant creating the right feel for the show. Fortunately, Clouden (supervising producer) had that territory covered. He told audiences that “New York is gritty, not shiny.” That means they had to incorporate the most realistic street art possible.

Pop art, graffiti, murals, textures, and the graphic quality of a comic book are all components he wanted to include. He also threw some shade at how other cartoons include graffiti that looks like “Trash.” That’s not something he wanted to repeat.

Clouden also expressed that he likes that Moon Girl’s story isn’t born out of tragedy. There was no death in her family to catalyze her hero’s journey. It’s not about Black suffering — it’s about Black joy.

To add to the unique feel of the show, Loter also shared that in addition to exceptional artwork, they will have special musical fight sequences. Each of Lunella’s battles is accompanied by music, almost like a music video. The team wasn’t afraid to have the music switch up styles either, especially after landing American singer Raphael Saddiq. Having Black artists be a part of a show with a Black lead plays a major role in telling the story the creators envisioned.

Similarly, Flynn (producer) and Libe (Casey) expressed how the show’s creators ensured the real-life experiences of everyone involved were incorporated into the series with dignity. Flynn said it was personally important as a Latina for the story to feel authentic. She was proud to share that women, people of color, and LGBT+ communities are all part of Marvel’s Moon Girl and Devil Dinosaur real-life team. The diversity that audiences see on screen also exists off-screen.

Barer also spoke to this inclusivity by noting her own experience with the team. While Casey was always supposed to be a Latina character, the creators decided to write her as Latina and Jewish to honor Barer’s own heritage, thus making her character more authentic.

She describes Casey as a “street smart” social media maven that’s a true friend. The friendship between Lunella and Casey is paralleled by the tight bond that White and Barer have outside of the show.

Ultimately, the cast and creators are their own team of super ready to take on anything that’s thrown at them together. With such a thoroughly aligned team, viewers can only imagine the payoff when the series lands on Disney Channel and eventually Disney +.

Marvel’s Moon Girl and Devil’s Dinosaur will premiere on Disney Channel in 2023.